STEM is so 'Yesterday’s News'

Recently I was attending the United Nations Science Technology and Innovation conference (STI Forum). While I attended to present on Wave Energy Conversion, the main subject at the conference was STEM education and STEM gender inequality. Almost every country in the world reports a lack of available STEM educated workers, and also reports that they have had problems engaging the non-male population in STEM professions.

The discussions were extremely far and wide ranging, but when all was said and done, the single sense I came away with is that nobody at the United Nations had a clear idea on solving either problem. As an engineer I am struck that there is such a tight focus on STEM. STEM alone is not going to solve the world’s problems, whether in the form of coding (the currently fashionable term for computer programming) or in the form of technology design, manufacturing, maintenance, or operation, which is the outcome of STEM and is called problem solving (a common definition of engineering).

The whole world seems to think that engineering is something that requires math and science and little else. Nothing is further from the truth. When I hire young engineers, I certainly expect them to be able to deal with mathematical and scientific issues, but what good is science and math, when everything they produce lacks elegance and fails to connect with their main customer; humanity at large. While engineers only receive a limited amount of college training in non STEM subjects, it is almost a given that those engineers who rise rapidly in their profession, are the ones who will also focus on non STEM skill development in their early career.

More recently, people have suggested that the answer lies with STEAM. Thereby somehow suggesting that Art is needed to make STEM complete. This is both true and pointless at the same time. True because Art is an incredibly important part of science, engineering, math and technology. Not Art in the form of a search for prettier depictions of emotional concepts, but, instead, in the form of the search for, and expression of, deeper truths, in math, science, engineering and technology. Hence, we talk about the art of engineering, or elegant mathematical proofs, or rugged and efficient code. However, in all those discussion about STEAM, people sadly seem to talk about Art as something that also deserves attention besides STEM, which is not going to make STEM, or even Art, any more viable. 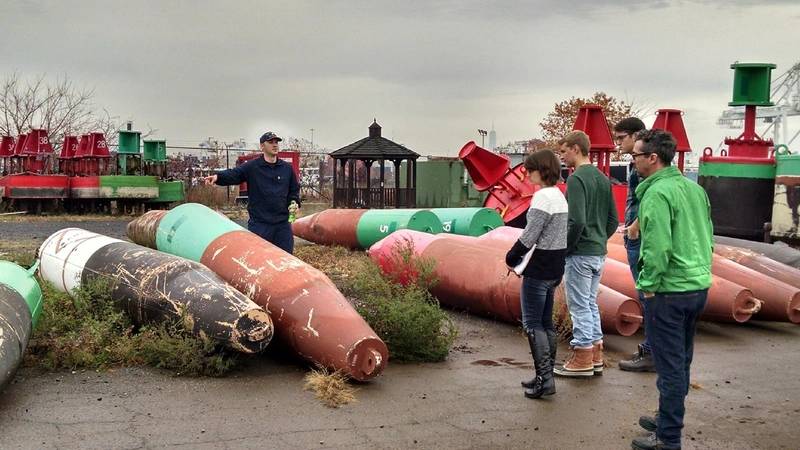 If there are artists and art teachers who will put their skills at the service of STEM education, we will achieve a greater level of success in STEM. But do such teachers exist? Where do I find Art teachers who understand both the complexities of Art and of STEM? I know of a few artist that understand STEM, and can even provide some examples of art projects that hit the nail on the head, but in the vast majority of cases, we are dealing with artists and art instructors who happily engage in art that has no connection to STEM and will staunchly defend their right to produce art that is just art and not befouled with the realities of science and engineering.

Meanwhile, there is ultimately little wrong with STEM education. We know, because STEM innovations are flooding our society (even though a large number of them may have no benefit to humanity at large). The problem lies with the Liberal Arts. Liberal Arts used to be a term that was related to the search of truth in all its natural forms (originally as a push back against religious education), but, over time, the Liberal Arts split. It split into hard science and engineering educational specialties and all the other non-STEM specialties. There was a day that a Liberal Arts degree required Math and Science and even a little engineering, but today a liberal arts degree can be wholly dedicated to History, or Language, or Philosophy or Art, without a serious immersion into Math and Science, and hence the schism between the two.

This has resulted in presorting of young people, regardless of gender, into subcategories along the path of least resistance into ineffective stovepipes. In this technological age this has resulted in groups of haves and have nots. Somehow, we seem to think of that as the STEMs, and the PHLAs (Philosophy, History, Language and Art). Undoubtedly, each individual human may have more talent or interest in one or another specialty. But specialties are useless if they cannot operate seamlessly in the whole. So what is the whole? The whole is not STEM it is not STEAM it is STEMPHLA.

So how do we solve the lack of STEM trained people and gender inequalities in STEM? I suggest we do it by not treating STEM as something different from PHLA. And now I will engage in a bit of finger pointing. Who has been treating STEM as different from PHLA?  The engineers, scientists, mathematicians or technologists? Maybe, but as I hear too often at college graduation ceremonies: STEMs have the jobs.

Moreover, STEM education has not ignored PHLA, there are strict humanities requirements in STEM education and beyond that, once STEMs realize that there are no successful STEMS without a solid grounding in PHLA, STEMs rush to increase their skills and knowledge in PHLA. But is this occurring with PHLA’s? I have a strong sense that once a person has specialized in PHLA they treat STEM with fear or contempt, and therefore will not be able to engage in the workplace in the most productive way.

So what is the solution? It seems simple to me. Let’s stop talking about STEM and instead focus on STEMPHLA. Only young people that see no difference between these categories will develop into fearless adults who can engage the world with a full toolbox to provide the solutions that we all need.

In writing this column, in the time to come, I hope to be able to discuss engineering from a STEMPHLA point of view.
For each column I write, MREN has agreed to make a small donation to an organization of my choice. For this column I nominate the technology program at MAST, the Marine Academy of Science and Technology, a Monmouth County, NJ Vocational High School that is a national leader in breaking the STEMPHLA stovepipes.    https://www.mcvsd.org/mast.html 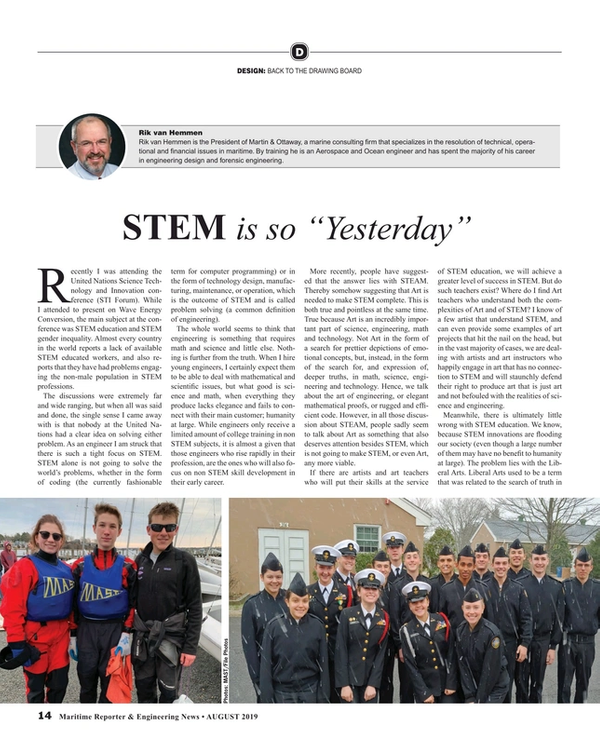 Read STEM is so 'Yesterday’s News' in Pdf, Flash or Html5 edition of August 2019 Maritime Reporter