In addition to fuel, modern ships also run on paper or their electronic equivalent.  Vessels are required to keep written or electronic records of many things – and the list is growing.

There is the traditional Ship’s Log, which records the vessel’s position, course, speed, weather, and unusual events to name a few.  The Oil Record Book (ORB) has been around for a long time and tracks all movement of oil throughout the vessel, including its loading, consumption, and discharge (generally via the oily water separator and overboard discharge piping).

- The Ballast Water Record Book records each operation concerning ballast water, including the date, time, location, and volume of each uptake and discharge, as well as the date and time ballast water is circulated or treated.

- On Board Training and Drills are tracked in another record.

- The Cargo Securing Record Book, in addition to containing the procedures for accepting, maintaining, and repairing or rejecting of cargo securing devices, also includes a record of inspections of such equipment.  The dangerous goods manifest and stowage plan must be kept up to date.

- The Ship Security Plan includes recordkeeping requirements for training, drills, exercises, and audits.  Work and Rest Hours have their own recordkeeping system, including an obligation for each crew member to be provided with a signed copy of their individual records.

Any and all of these records must be made available to the port state control officer upon demand.  In the United States, it is a violation of federal law to present a fraudulent record to such officer.  Specifically, 18 U.S. Code § 1519 provides:

Whoever knowingly alters, destroys, mutilates, conceals, covers up, falsifies, or makes a false entry in any record, document, or tangible object with the intent to impede, obstruct, or influence the investigation or proper administration of any matter within the jurisdiction of any department or agency of the United States . . . or in relation to or contemplation of any such matter or case, shall be fined under this title, imprisoned not more than 20 years, or both.

Unlike in some port states where fraudulent ship’s records are either not detected or ignored, the United States vigorously prosecutes any and all violations suspected to exist.  In addition, if a crew member provides substantial evidence to support the prosecution, that crew member can be handsomely rewarded in many instances.  Thus, multimillion criminal fines against ship owners and operators for violations including fraudulent recordkeeping have become commonplace.

In 1999, Royal Caribbean Cruises Ltd pled guilty in federal court to a variety of offenses including the intentional discharging at sea of waste oil that was not processed through the oily water separator and of lying to the US Coast Guard by presenting to a boarding officer in the Port of Miami the ship’s oil record book which did not contain entries for the illegal discharges.  The company paid an $18 million criminal fine and served five years under a court-supervised environmental compliance program.  While this was the first high visibility such prosecution, it was certainly not the first instance of the federal government pursuing fraudulent recordkeeping offenses in the maritime sector.

Unfortunately, these multimillion dollar fines have not resulted in wholesale changes in the manner in which many ships engage in recordkeeping.

Fudging entries, ignoring unpleasant facts (such as malfunctioning equipment), cutting corners, and outright fraud remain all too common.  Some companies accept this as a fact of life.  Others see it as an acceptable cost-cutting measure, saving money on repairs and downtime, in an era of low profits and cut-throat competition.  In egregious cases, the federal government has banned the vessels of offending companies from operating in US for a period of years.

Million-dollar fines related to fraudulent oil record book entries have become frequent.  Less frequent, though growing, have been fines for fraudulent entries in sewage record books, garbage record books, and ballast water record books.  Any official and some unofficial records maintained by a vessel or its owner/operator could become the focus of a criminal investigation.

Companies that do not make concerted efforts to encourage accurate recordkeeping on their vessels while discouraging and rooting out fraudulent record entries are engaged in high stakes gambling.  Penalties will continue to increase for violations detected in the United States.  Other nations are starting to take action when maritime fraud is discovered.

The days of laisser-faire are drawing to a close. 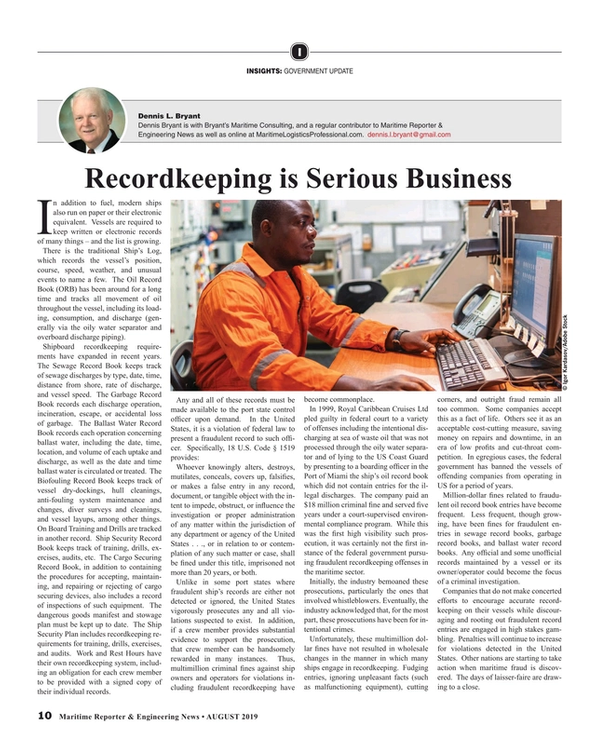