An Open Arctic and its Impact on Oil Drilling

William Cho, Head of MatthewsDaniel Weather, a division of the Bureau Veritas Group, explains why improvements in drilling technologies and weather monitoring systems have made offshore shelf drilling operations in the Arctic Circle increasingly attractive to upstream oil and gas companies and their investors.

Rising crude oil prices motivate not only technological innovators to explore cheaper alternative energy sources, such as solar panels and wind turbines, but also upstream oil and gas companies to explore new oil reserves which had not otherwise been economical. While the exact amount is less certain than highly developed areas, such as the North Sea or the Gulf of Mexico, the United States Geological Survey (USGS) estimated in 2008 that the Arctic contained about 412 billion barrels of undiscovered oil and oil equivalent.
The Arctic Circle area, in particular, has approximately 90 billion barrels of undiscovered but technically recoverable oil, 1,670 trillion cubic feet of technically recoverable natural gas, and 44 billion barrels of technically recoverable natural gas liquids. To put these amounts into context, they account for about 22 percent of the ‘not yet discovered but recoverable’ resources in the world. Drilling down into these figures, lying in the Arctic zone is one third of the world’s undiscovered but potentially recoverable natural gas reserves. With improvements in drilling technologies and weather monitoring systems, offshore shelf drilling operations in the Arctic Circle have become increasingly attractive to upstream oil and gas companies and their investors. USGS estimates that about 84 percent of these resources are offshore.

Melting Ice = Accessible Assets
In addition to technological advancements in identifying oil and gas pockets and new drilling methods, such as multilateral drilling, the declining ice extent in the Arctic Sea has enabled the exploration for minerals. An unprecedented amount of the Arctic ice melted in 2007, surpassing the previous record low ice in 2005 by 24 percent. Another record ice-melt was observed in the summer of 2012, leaving the Northwest Passage navigable. The next record low ice is expected to occur in 2015 or 2016. These findings signify that Mobile Offshore Drilling Units (MODUs) will be able to undertake voyages to areas previously inaccessible, and drilling contractors will also have longer drilling seasons.
MatthewsDaniel Weather monitors melting ice in the Kara Sea and the Chukchi Sea to calculate an estimated beginning and ending date for offshore drilling seasons. The Kara Sea (‘Ка́рское мо́ре’ in Russian) forms part of the Arctic Ocean north of Siberia and has a mean water depth of 110 meters (360 feet). Although the sea is ice-bound for about ten months of the year, a significant amount of untouched petroleum and natural gas reserves lie in the East-Prinovozemelsky field, an extension of the West Siberian Oil Basin. Estimated recoverable resources in East Prinovozemelsky Blocks 1, 2 and 3 are almost 21 billion tons of oil equivalent.
The Chukchi Sea (‘Чуко́тское мо́ре’ in Russian), on the other hand, is a marginal sea of the Arctic Ocean and is bounded on the west by the De Long Strait, off Wrangel Island, and in the east by Point Barrow, Alaska. About 56 percent of its total area has a water depth of less than 50 meters (164 feet), and the sea is open (navigable) about three and a half months of the year on average. The oil and gas reserve in the Chukchi Sea is estimated to be as high as 30 billion barrels of oil and gas. Several oil companies have been bidding for extraction rights, for around US$2.6 billion.

Science Supports Seasonal Drilling
MatthewsDaniel Weather analyzed significant wave data in both the Kara and Chukchi Seas over three time periods: 1979 to 1989, 1990 to 1999, and 2000 to 2012, to determine the lengths of past drilling seasons. Jill Hasling, Chief Consulting Meteorologist at MatthewsDaniel, states, “In addition to the retreat of the ice in the Kara Sea, the Kara Gate needs to be ice-free (less than 15 percent ice in the region) in order to enable mobilization.” Based on this research, Jill and her team were able to identify the historic potential drilling windows for the Kara Sea and the Chukchi Sea. Drilling seasons are determined by the retreat and return of ice in the Marginal Ice Zones (MIZ). MIZ is beyond the extent of the year-round pack ice.
Combining this analysis of past drilling seasons with current daily plots of the sea ice extent and meteorological conditions, MatthewsDaniel Weather developed a methodology for predicting start and end dates of future drilling seasons. In May 2014, it forecast that the 2014 Arctic drilling season would start on July 25 and continue until October 25 for the Kara Sea and from July 18 to October 25 for the Chukchi Sea. The actual ice-free period (less than 15 percent ice in the region) began on August 4 for the Kara Sea and on July 25 for the Chukchi Sea.
James Vavasour, Executive Vice President at MatthewsDaniel, said, “It is still too early to accurately identify the end of the season, but we expect it will be within ten days of the prediction we made in May. We can, with a degree of confidence, estimate next year’s drilling season; for the Kara Sea, beginning on August 4 and ending on October 30, and from July 25 to November 2 for the Chukchi Sea.”

What does this mean for Industry?
Certain risks in the Arctic Sea are obvious, such as potential freezing of fluids and winterizing equipment due to extremely cold temperatures. Other considerations are remoteness in an already isolated region, communication challenges, collision risk with drifting icebergs, and weather delays while retrieving drilling equipment from the ocean at the end of the season. S Douglas Devoy, President of MatthewsDaniel in Houston, adds, “A number of separate and significant issues come into play when having to mobilize a mobile offshore drilling unit and, of course, its support and supply vessels into the Arctic. These include ice and potential heavy weather, which might come into play late in the season.  The more accurately we can predict or model these, the better the industry can prepare to meet these difficult circumstances.”
Further analysis shows that the frequency of Arctic storms has increased due to more atmospheric interactions with the open sea.  Arctic storms expedite the melting process by breaking up the ice cover. NASA’s Arctic storm track maps contrast storm frequency between 1950-1972 and 2000-2006, showing a marked increase.
On a broader view, the ability to predict the drilling window will undoubtedly enable companies to fine-tune their mobilization programs, and benefit from a higher degree of certainty on expenditure planning. However, the weather analysis can have more specific influence on operations. During the planning stage of mobilizing a vessel to the Arctic, MatthewsDaniel Weather would provide SafeTrans voyage route simulations, based on captains’ decision mimics and probabilistic environmental wind and wave condition reports. During the actual voyage, the Weather team would provide the mobilization team with twice-daily forecasts for the following eight days for more inclusive, ‘real-time’ planning and decision-making.
MatthewsDaniel demonstrates its commitment to risk mitigation in the Arctic environment through its contribution to SALTO: Safe Arctic Logistics, Transport & Operation. This Joint Industry Project aims to offer risk-based tools to assist the industry with its preparations for operating in Arctic environmental conditions.
The three factors that would make the exploration of Arctic reserves attractive to investors and upstream oil and gas companies are high commodity prices and technological feasibility, coupled with favorable environmental conditions. The first two criteria are met by the global rise of crude oil prices since 2009 and industry-wide investment and innovation in drilling technology. These technological solutions have made it feasible and more cost-effective to explore remote or difficult reserves and produce with fewer installations. The key that is specific to the Arctic is the lengthening of the drilling season, due to warming waters and increased storm activity.
Considered alongside these commercial factors are potential positive and negative impacts on local economies, environmental risks such as ecosystem disturbance and oil spill and political sensitivities.  The mood and appetite is to accept the challenges that this harsh region represents. And, science and nature can combine forces to minimize risk and promote a safer operating environment. 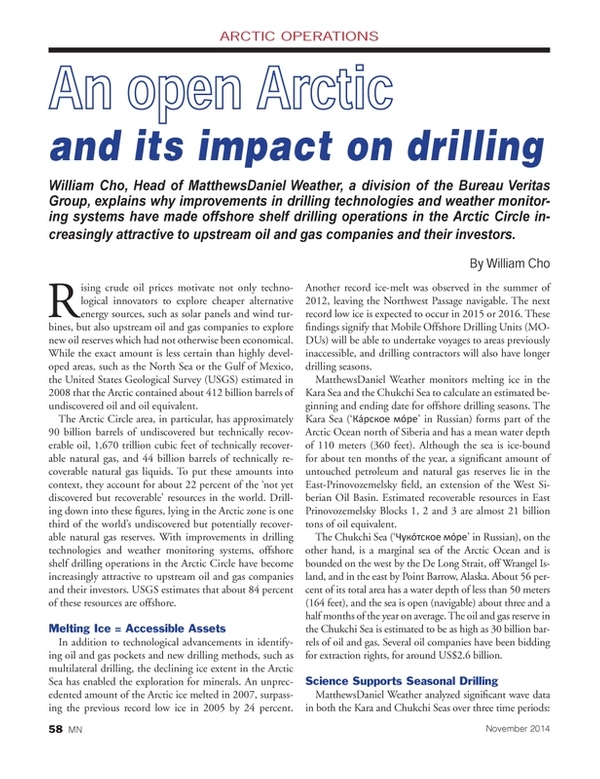 Read An Open Arctic and its Impact on Oil Drilling in Pdf, Flash or Html5 edition of November 2014 Marine News