“While the U.S. Coast Guard regrets any hardship merchant mariners may experience to maintain their credentials, we must maintain the safety of the Marine Transportation System through a comprehensive MMC (Merchant Marine Credential) evaluation process. This allows the U.S. Coast Guard to make well informed decisions while protecting the public safety.”

The U.S. Coast Guard issued these words in response to a query made by a congressional representative on behalf of a prospective mariner regarding incorrect Medical Credential date of expiration after three weeks of no response from the National Mariner Center (NMC) in Martinsburg, WV. In 2006, the International Maritime Organization (IMO) adopted the Maritime Labor Convention (MLC) pending approval from member states. Finally in August 2012, 30 percent of the participating countries ratified the Convention. In August 2013, the MLC became law per international treaty.

The Coast Guard eventually issued a final rule on 17 January 2014, five months after the fact, but took another two months to correct the issuance of the first medical credential for the mariner in question. A good question to ask is why did it take the Coast Guard so long to formulate the final rules for medical credentialing? They had seven years from the date of passing of the Convention and another year after its ratification to finalize the rules. What if my livelihood depended upon timely issuance of that piece of paper?

Real Issues
The issue stems from the date of expiration provided on these credentials. The first Medical Credential was slated to expire four (4) months after issuance. It can take six months to one year to complete the process for the certificate initially, which is why the original query had been made asking about an expiration date – which was good for only four months. The Coast Guard ignored that inquiry, and Congressional representative intervention became necessary to secure a response. How are mariners, whose very livelihood relies upon having the necessary certification to sail, supposed to meet the submission requirements and receive a certificate that allows them to sail if when issued, they are only good for a few months?

Actually, there are three dates printed on a Medical Credential. First Class Pilots, for example, have a two-year maximum expiration date. If the Pilot is actively engaged in Piloting ships, then the certification has to be renewed in one year. If they are not engaged in piloting then the expiration is two years, which is the date printed. The second date is for mariners engaged upon international voyages which requires the Standard of Training, Certification and Watchkeeping (STCW) training certificates. This medical credential expiration date is two (2) years. The third date of expiration is for National credentials or ratings for mariners who do not travel internationally with a five year expiration date.

If the issuing body is truly interested in “protecting the public safety,” how does granting a five year expiration date for operators plying domestic waters meet this lofty goal? Everyone else must undergo the probes and expense of medical examinations every two (2) years or one (1) year as in the case of active Pilots.

Policy in Practice
In 2003, the New York Staten Island Ferry, “Andrew J. Barberi”, allided with a maintenance dock while carrying more than 1,000 passengers and 15 crew, injuring 70 and resulting in the deaths of 11 passengers. Mariners tasked with ferrying millions of American passengers annually and those moving millions of barrels of oil in the same time period along the U.S. Coast get their medical condition checked every five years. Hence, if the intent of the U.S. Coast Guard is “to maintain the safety of the Marine Transportation System through a comprehensive MMC (Merchant Marine Credential) evaluation process,” shouldn’t these mariners whose wellbeing is necessary to the health, safety and security of US citizens and US resources receive the same sort of review?

Upon further investigation of the ferry incident, the operator, an Assistant Captain at the time of allision, was temporarily unresponsive after taking one prescription pain reliever that promotes drowsiness. According to company regulations, there was to be a second person (Assistant Captain or Captain) on the ferry bridge able to take control while underway and just before docking, but in this instance, the Captain was not on the bridge and the two crewmembers in the wheelhouse – a lookout and mate – were not vetted to operate the ferry maneuvering controls. The incident precipitated the 10 page comprehensive medical form (719-K) required to be filled out each time a mariner renews a credential (license, seaman’s document), as  opposed to the less comprehensive four page medical form 719 in use for the previous 20 years, in one form or another.

The National Transportation Safety Board (NTSB) investigation of the event pointed out that “a mariner’s medical status is reviewed only every five years, during which time he or she could experience new medical symptoms, see a health care provider, take new medications, or be hospitalized.” Nevertheless, the accident that happened over 10 years ago has not changed the policy for this class or service of mariner. Why are the people who ferry millions of people and transport millions of tons/barrels of hazardous substances along our coast exempt from taking physicals every two years? Are these Nationally credentialed crewmembers in that good of physical shape?

Real Life – Impossible Criteria
The reasons for the unequal playing field are actually quite simple. If the NMC were to have all credentialed mariners submit physical examination results at two year intervals, our Coast Guard could not perform the necessary 200,000 evaluations in a timely manner. Presently, their annual evaluations number from 50,000 to 70,000 annually. Given present manpower and resources allocated by the DHS, if they did attempt to evaluate over 200,000 exams per year, ships would not sail, oil among other products, would not get moved. The safety of millions of people and clean waterways hangs in the balance.
The Federal Aviation Administration has over 1,000 medical doctors or Aviation Medical Examiners (AME) trained in occupational medicine. Is the aviation industry that much different from the sea going trades? In terms of public visibility, that’s certainly the case. In terms of the amount of cargo and passengers moved by the domestic maritime industry on an annual basis, it certainly is not. And, if it is important enough to hire that many medical professionals to oversee the very important health of the nation’s airline professionals, the same is true for the waterfront.

Another Headache: Off the Water and into the Classroom
Beyond those who hope to continue to go out to sea, despite advancing into the ranks of the so-called “middle-aged” and taking with them the health baggage that goes along with it, another issue lurks for both the Coast Guard itself and the maritime academies and training institutions that are bringing along the next generation of mariners. That’s because another implication of the heightened medical criterion is the recertification of “at-sea” training instructors, as well as those who never intend to sign articles ever again. As professors and instructors become older, it becomes just as difficult for these licensed mariners to maintain their tickets as it does for those who remain at sea. And, most academies require a valid license for those who teach professional subjects.

Projecting further, today’s American deep sea merchant fleet engaged with international commerce consists of perhaps 86 to 120 ships. Hence, the number of mariners actively engaged with this type of operation are likely as selective a group as major league baseball players. When these people decide to retire or leave commercial service, some go on to impart their knowledge at the various maritime academies and training institutions. Many do not. Those who do, find themselves in the same situation as their seagoing counterparts.

Separately, and as the STCW training issue moves forward, the possibility of cramming a four-year college curriculum into a training regimen that can’t possibly be accomplished in five also hits home in terms of who will still be “qualified” to do just that. Not many, if the current regulations continue. Sometimes, knowledge should be the variable that trumps everything else. But, not if a standard stipulates one, two, and then five years of medical credentialing – all at the same time. Could today’s educational professionals – sailing on a training ship that is already required to have a physician on board – continue to do what they already do so well? Of course, they can.

There is a reason that it takes twenty to thirty years of actual sea time to eventually bring along the next generation of mariners. Yes, simulation is doing that much better than the previous practice of standing an otherwise boring sea watch, interrupted by fleeting moments of terror. That said; there is much to be said for – and everything to be lost if we discount – the experience imparted by today’s rapidly graying mariners.

Today’s dilemma for the Coast Guard, the IMO and everyone else, involves trying to cram twenty years of experience into a 20-year-old body. It simply cannot be done. And, with a policy of having one, two and five year medical renewals for different sectors of the maritime industry, we do nothing to promote safety, everything to create havoc, and nothing to impart a culture of parity. It is easy to say that it’s all about money. But, it’s not. We properly police – in a uniform fashion – truckers, airline pilots and railroad professionals. There is no reason to not do the same with America’s mariners, no matter what sector they toil in. Anything less is unacceptable. 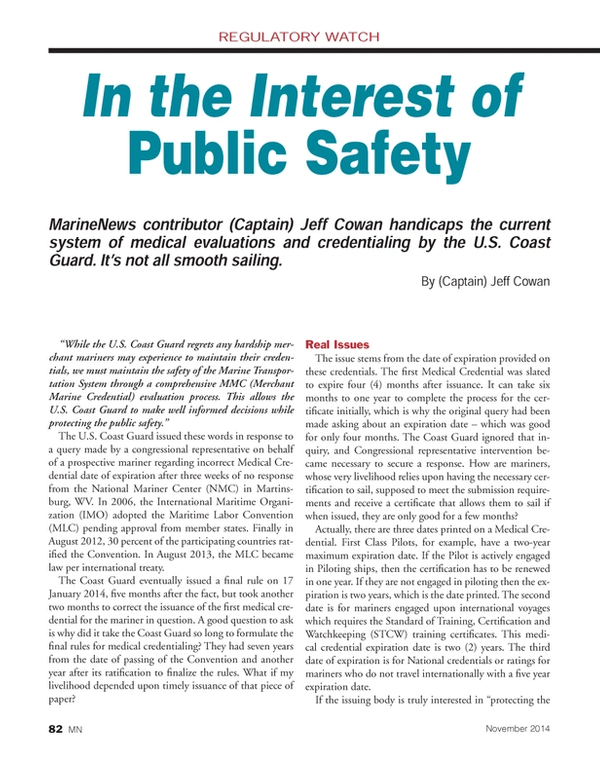