IMTRA: Growth from Within

IMTRA, the New Bedford, Mass.-based manufacturer and importer of solutions and products for the marine, energy and transportation markets, recently underwent a change in ownership. But even under new owners, so much about the company, including its makeup and offering, will remain unchanged. And that’s because the new owners are the company’s existing employees.

Eric Braitmayer, president and CEO, said IMTRA’s leadership—including vice president of recreational sales Chip Farnham, third generation of the family that founded IMTRA some 70 years ago—was planning for the future when it decided a change in ownership structure would be necessary. But they also knew they wanted to maintain as much of the company’s DNA as possible, including its nimbleness and customer-first mentality.

“We felt really strongly that bringing in outside ownership was going to impact our culture—not necessarily in a bad way,” Braitmayer said, noting that with new investors could potentially come new challenges or unwanted changes. “We felt really strongly that we had a special formula here, and we had 70 something people that had invested their careers in this, and we didn’t want things to get derailed quickly.”

So Braitmayer and IMTRA’s management team did their research, weighed their options and determined that selling the company to its employees would be the best move. IMTRA announced in January that 100% ownership rights of the company had been sold to its employees through an  Employee Stock Ownership Plan (ESOP), which allows the leadership team to stay in place while providing a competitive return for the shareholders—without the potential challenges that often come with a change in control of a closely held business.

“It really checked a ton of boxes for us,” Braitmayer said. “There’s a misinterpretation that if you sell to your employees, that somehow you’re going to receive less than you would from another buyer. And I don’t believe that’s actually the case.”

“You get to keep your management team intact, and you get to basically involve all your employees. Personally, I believe that employee ownership is also a great opportunity for us in the states to address wealth inequality. And while that sounds really philanthropic, which I believe in building that out, I don’t feel that came at some sort of discount that the [previous ownership] had to give. We feel super happy with the price that we got and the way that the transaction played out. And I’m really excited about what it’s going to do for our employees as we go forward.”

“We have a core of really great mid-career people,” Braitmayer said. “With this setup, the employees, all of them, they’re going to earn their ownership stake. . . Now we just have to develop great leaders that are going to be able to run the business, maintain the culture, continue to be focused on our customers, finding new products, finding new solutions for the customers that we work with, continue to do what we’ve done for 70 years, and the ownership part will take care of itself.”

Growth plan
While the company has been growing, it has its sights set on even more expansion. “Since May of 2020, we have been on a torrid stretch where we’ve seen our top line numbers grow by about 35%,” Braitmayer said.

He noted that IMTRA is investing to grow its physical footprint to more efficiently handle its increased flow of products, and that it is working closely supplier partners to understand their supply chain challenges and how to best keep products flowing for customers.

“We’re continuing to invest in our people, which is our number one resource,” Braitmayer said. IMTRA has been adding staff and is looking to hire for several more positions, specifically for serving the commercial marine market where the company sees significant opportunities.

According to Braitmayer, IMTRA is well known in the commercial marine space for several key products, such as Sleipner thrusters; Norsap chairs; Exalto, Decca and Roca wipers; plus a large spread of both self-manufactured and sourced lighting solutions.

“We’re continuing to look to expand our commercial portfolio. In the last couple of years, we’ve added a couple of great relationships,” Braitmayer said. The executive cited growth opportunities from working with Norwegian company Libra, which supplies doors and hatches, as well as a recent partnership with KPM Marine, an English manufacturer that does air handling systems and bilge pumps. “And we’re always looking for more.”

Braitmayer explained that IMTRA “very strategically” chose to do much of the ESOP financing through existing ownership to maintain the company’s borrowing power and resources should the right opportunity arise. “If a new product line comes on and we need to invest in inventory, we’re more than able to do that. If the right acquisition opportunity came up, we’d be eager to consider those things as something that we could leverage for the future,” he said. “When we structured the deal on the ESOP, we wanted to make sure that how we did it didn’t hamper us from those kinds of normal business growth trajectory, things that we would’ve been doing, whether we did the ESOP or not.” 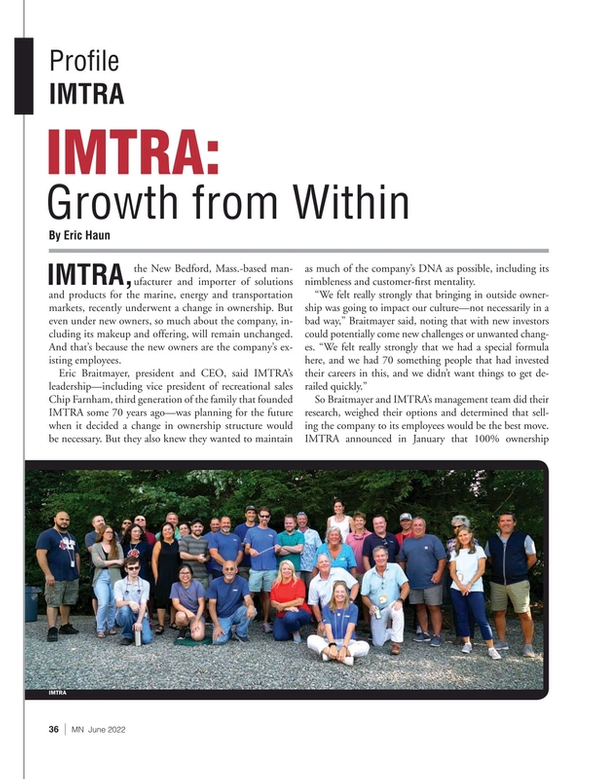 Read IMTRA: Growth from Within in Pdf, Flash or Html5 edition of June 2022 Marine News