In November 2021, GTMaritime published a white paper: “Maritime Communications - A look over the horizon.” The report, available here, is built around three broad Sections – 1. “Basics of marine Communications;” 2. “The connected ship;” and 3. “Special services.”

Then, each Section presents a closer look at various topics. The “Basics” section, for example, covers regulatory issues established by IMO treaties and national agencies. It presents the terms and concepts that define satellite systems and networks, including an explanation of various electromagnetic bands, e.g., L-Band Ka, Ku (important for maritime VSAT), and how they are used by satellite and equipment providers. The “connected ship” section covers cybersecurity and performance monitoring. “Special services” looks at training, telemedicine and future communication planning.

Each topical section closes with an “On the Horizon” summary that anticipates emerging issues and how they are likely to develop in the not-too-distant future, which, in this fast-moving field, closes in rapidly. If maritime communications is one of your assigned duties, this 54-page guide provides a solid workplace foundation.

As in every other field closely linked to technology and digitalization advances in maritime communications present a fascinating array of new and emerging opportunities. These developments are changing just about every aspect of every singular way that communication occurs – from co-worker conversations to safety monitoring to vessel tracking to Internet-of-things capabilities and, eventually, to remote and maybe even autonomous operations. And it’s an optimist’s world: service is better, capabilities are expanding, costs are declining.

Depending on its work zone, not every ship faces the same communications demands and the equipment to meet those demands. The Global Maritime Distress and Safety System (GMDSS) is a starting reference, and, in some ways, a historical one. In general, GMDSS requirements increase the farther a vessel works from a coastline and moves to increasingly distant Sea Areas (1 thru 4), where each Area demands upgraded communication links to, minimally, meet Safety of Life at Sea (SOLAS) requirements.

Digitalization: Unstoppable
In 2022, though, while safety is still a foremost concern, the notion of limited, bare-bones communication, based largely on the need for emergency contact, is, well, so yesterday. Now, VSAT (very small aperture terminal) satellite linked digital systems pretty much give a captain and crew whatever they want regarding communications, whether for people on board or for reports from the vessel itself, whether operations are ten miles from shore or 1,000 miles.

Chris Watson is VP marketing and communications with KVH Industries, Inc. KVH provides hardware and communication services across the marine sector. “We are seeing trends throughout the commercial maritime industry,” Watson said, “for VSAT and IoT connectivity. Cellular service is also important when vessels are in port or working closer to shore, e.g., tugs working in rivers and harbors.”

A big change over the last few years has been increased availability from satellite technologies because of investments in Ka and Ku bandwidth (the abbreviations reference specific sections of the electromagnetic spectrum. Again, see GTMaritime’s white paper.) Older bandwiths, e.g., L-Band, are congested, with high prices. New capacity is important for service and economics.

Ku and Ka costs have dropped. Ka, for example, has lower manufacturing and transport costs. Ku band coverage is more extensive and may be better for a customer’s particular operations. Ku band is used for most VSAT systems.

“The migration from L-band to Ku-band VSAT,” Watson explained, “has been going on for several years, but has really accelerated recently because ship operators know there are cost benefits with digitalization.” These benefits include higher quality Internet service and personal communications for crew members – important for morale. With VSAT, a crew can engage in video conferencing. The vessel can install security cameras. Tech and operations support can be remote. These systems are flexible, too – they can be configured, for example, to automatically switch from VSAT to cellular when a vessel is in port.

When Zodiac ZH outfitted its 1300 OB Hurricane interceptor it chose David Clark’s 9100 system because of its versatility and ease of use, and it provides full intercom and radio functions into each user’s headset. Indeed, the Hurricane’s four 350 HP Mercury outboards make for a very noisy workplace. The 9100 headsets effectively block the noise but still allow communication.

“The Series 9100 is easy to configure and operate,” Daigle commented. A simple user interface, accessible via laptop computer, allows crews to program individual user access, talk and listen, for intercom and each radio on the system, including priority settings. As necessary, say, when boarding another vessel, crews can reconnect a headset to a wireless belt station to maintaining communication.

“The 9100 offers flexibility and redundancy,” Daigle explained further. “For example, a coxswain on a police interdiction boat would want a wired headset station in order to provide remote push-to-talk switches on a throttle control, so as to key a radio without taking one hand off the steering wheel.”

Wireless is reliable up to 100 meters; however, in optimal line-of-sight conditions the range can reach up to 500 meters. 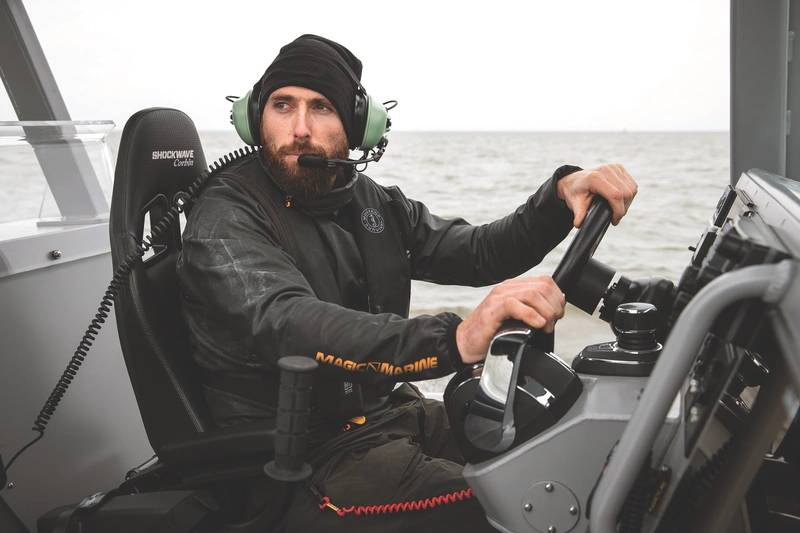 Engineering evolution
Another technology being developed for expanded communications is VHS Data Exchange System (VDES). In its white paper, GTMaritime refers to VDES as an automatic identification system (AIS) “on steroids.” Development was started by the International Association of Lighthouse Authorities’ e-NAV Committee.

VDES will make it possible to send broadband data without a satellite link, making communication more economical. However, service would be limited to near coastal waters, say, within 50km from the nearest land-based equipment. Still, if a vessel works solely in Sea Area 1, and doesn’t need global connectivity, VDES will provide upgraded communication and navigation without increasing costs. GTMaritime writes that “VDES is capable of facilitating numerous applications for safety and security of navigation, protection of marine environment, efficiency of shipping and others.”

Jan Safar, PhD and Alan Grant, PhD are researching VDES with the R&D arm of the General Lighthouse Authorities of U.K. and Ireland. In September 2021 they presented a paper – “VHF Data Exchange System on-air trials: The journey so far” – to the Institute of Navigation conference in St. Louis.

In reply to email questions, Safar and Grant said they expect that with a “high power” setting, VDES coverage should extend to about 22 n-miles, at least from their working reference point (Harwich, UK, on the North Sea coast). Noise levels – from machinery to other radio equipment – remain an issue. Research continues in 2022.

Safar and Grant were asked about interference from wind energy towers. They said that “in brief, we saw an impact due to reflections from the rotating windmill blades but only in close proximity (perhaps within a few hundred meters).” New receiver designs, they said, should offset this and they don’t expect a significant deterioration in performance. “However,” they cautioned, “this remains to be verified.”

In March, Saab and the Danish tech company Sternula ApS announced a VDES partnership in which Saab will provide 32 AIS/VDES ship transponders with “both terrestrial and satellite VDES functionality.” In the announcement, Saab refers to VDES as “the next generation of AIS” and that “VDES will increase maritime safety and contribute to a greener shipping industry.” Sternula writes that “for the rest of this decade, (VDES) technology will enable a shift from today’s manual administrative processes to a highly automated maritime industry.” System installation started in March and continues to January. The pilot will include working customers and will also inform Sternula’s MARIOT project, i.e., the company’s maritime Internet-of-Things research.

The connected ship
Digitalization, of course, has changed the whole concept of communications; considered mostly just a human trait not that long ago. Now, humans don’t even need to be present. This trend is really just starting; it places new demands on software and satellites.

GTMaritime’s report explains that vessel monitoring has been around for almost 20 years, calculating such factors as fuel use, engine power and load and ballast capacity. However, only the ship’s crew could take real time advantage of that information. Data could be archived but a historical review was too late for real time decisions about fuel consumption or operational efficiencies.

Communication advances are now making real time awareness standard, and not just on the vessel itself. Isolation is over. Software now provides real time data to a shore office or a cloud-based reporting system, allowing company personnel anywhere, anytime to be active in the ship’s sailing.

GTMaritime references the Marorka Onboard system to exemplify these advanced software-communication developments which can include numerous metrics such as fuel consumption and electricity production and consumption. By tracking multiple vessels simultaneously, for example, managers can identify, and correct, a vessel that isn’t operating optimally compared to others in the fleet. Looking ahead, IoT applications will move connectivity to the next level.

Outer space
GTMaritime predicts that these new demands will increase the load on communications systems. However, they further predict that this new monitoring and tracking will reduce energy costs to such a degree that the level of fuel savings is likely to cover the extra cost of communications “many times over and at the same time allow capacity for further changes such as assisted maintenance or remote operation.”

Therese Jones is senior director of policy for the Satellite Industry Association, based in Washington, DC. She said that new satellite communications services are continuously coming online. Technology is edging towards a world of 5G and IoT maritime applications, Jones said. “These services,” she added, “may allow for autonomous vessels, and connected IoT sensors may be used for different applications from fuel sensors to monitoring emissions, or real-time performance evaluation of vessels.” 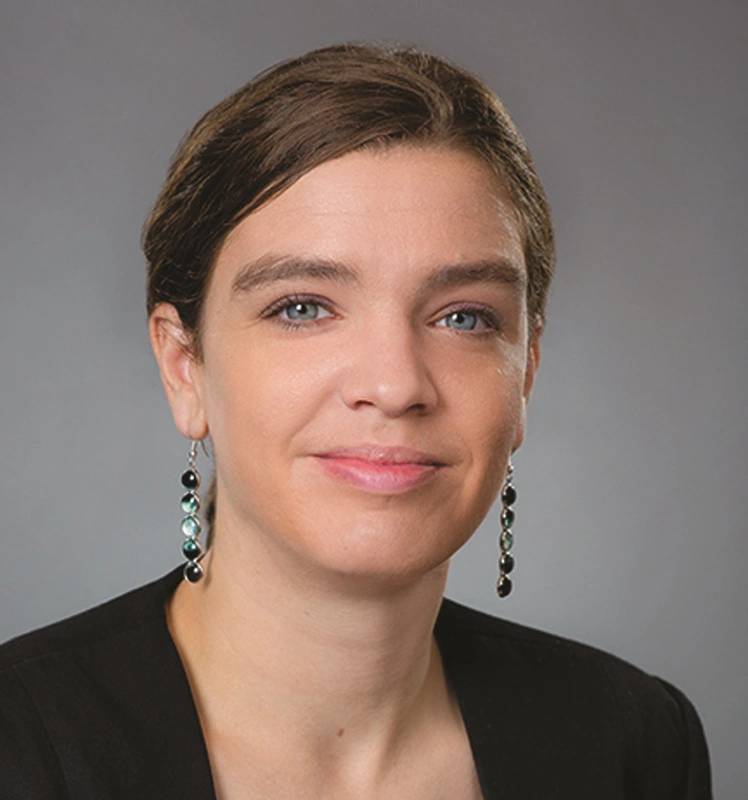 Therese Jones, Senior Director of Policy for the Satellite Industry Association, said new satellite communications services are continuously coming online. Technology is edging towards a world of 5G and IoT maritime applications, Jones said. “These services,” she added, “may allow for autonomous vessels, and connected IoT sensors may be used for different applications from fuel sensors to monitoring emissions, or real-time performance evaluation of vessels.” (Photo: Satellite Industry Association)

Jones referenced planned studies to consider new maritime satellite service allocations “to enable a new VHF Data Exchange System satellite component.” She said that new remote sensing applications are emerging, and she referenced “synthetic aperture radar (which) can be used to detect dark vessels at sea, monitor ice flows in the Arctic/Antarctic, and see through clouds even during hurricanes. Radio Frequency (RF) mapping from space can detect individual RF sources, and thus can even detect handheld radios onboard dark vessels.”

Another developing topic is IMO’s efforts, in May, to finalize changes to the global maritime distress system, modernizing and expanding system capabilities, particularly with reference to satellites. Also upcoming: a June meeting of the Sub-Committee on Safety of Navigation, Communication and Search and Rescue (NCSR).

In commenting about the future, Jones cautioned that cybersecurity issues should be at the forefront of communication planning. She said that system users can get careless while hackers get increasingly sophisticated. “I have heard of users not changing the default passwords of their terminals, for instance,” she added. 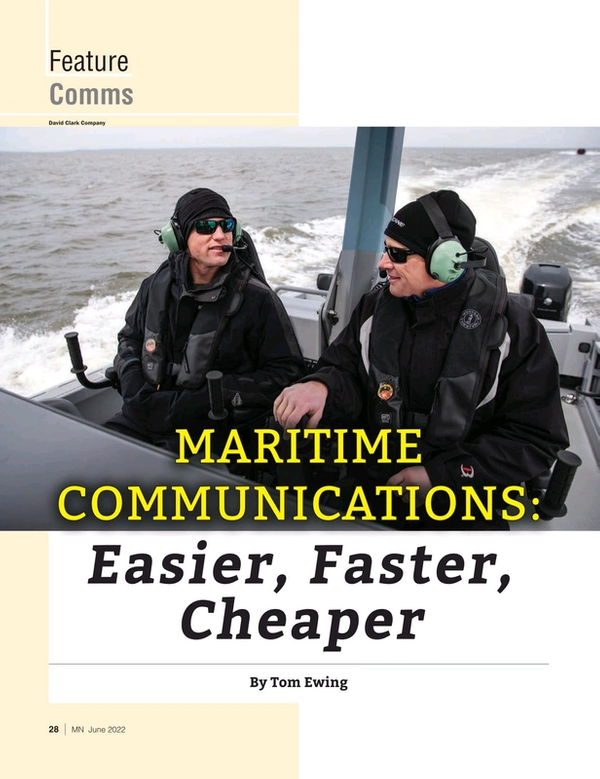