A key West Coast maritime executive who is nationally and internationally known in the tug and barge industry has ibeen elected chairman of the board of the American Institute of Merchant Shipping (AIMS).

He is Thomas B. Crowley, president and board chairman of Crowley Maritime Corporation, San Francisco, Calif., representing the largest tug and barge operation on the Pacific 'Coast.

Crowley has been associated with the diverse Crowley West Coast maritime enterprises, begun by his father in San Francisco before the turn of the century. The various tug and barge companies under the Crowley Maritime Corporation are located in several regions of the Pacific Coast, including Alaska.

His 'famed Red Stack ttjgs handle the docking and undocking of ships in the harbors of Los Angeles, Long Beach, San Francisco, and Eureka, while the firm's barge fleet provides harbor and coastwise transportation for all types of cargo.

Other Crowley affiliated companies include two ship repair yards in Oakland and a passenger transportation business on San Francisco Bay and in Los Angeles Harbor. Mr. Crowley's varied operations also include specialized contract and common carriage transportation on the East and Gulf Coasts, plus a deepsea towing service on a worldwide basis.

Mr. Crowley?s company has for a number of years provided essential shipping services in support of Arctic oil exploration and development, and in 1968 delivered the first commercial cargo to Alaska's North 'Slope. More recently, his seagoing tugs and barges made the biggest Arctic sealift in history when 62 tugs and barges flying the Crowley houseflag delivered 185,- 000 tons of oil field supplies and construction material to Prudhoe Bay. Presently, his company is building 16 new 400-foot oceangoing barges, each with a 12,500-ton cargo-carrying capacity.

In 1970, on recommendation of the Secretary of Defense, Mr.

Crowley received the coveted National Transportation Award for his company's outstanding work in delivering supplies and equipment to the far-flung military bases of Alaska. He 'has 'been a board member of both AIMS and the American Bureau of Shipping, has-served as president of the Western Shipbuilding Association and regional director of the American Waterways Operators, in addition to serving as a member of numerous other shipping and transportation organizations.

As board chairman of AIMS, Mr. Crowley assumes the leadership of an association organized in 1969 through the merger of three steamship trade associations representing all coasts. As the nation's largest American-flag shipowners' association, AIMS is comprised of 33 companies operating 330 drycargo ships, tankers, ore carriers and barges in the foreign, coastal and intercoastal trades. These vessels represent over 60 percent of all active, privately owned ships registered under the U.S. flag and aggregate over 7.5 million deadweight tons.

AIMS officers reelected for the year by the board were James J.

In a review of AIMS's activities, Mr. Reynolds said the organization had recently completed its fifth year of operation. AIMS came into being, he recalled, to unify the industry, resolve or minimize the differences among shipping segments and to speak with one voice on all policy matters affecting the American merchant marine, both on the national and international scene.

"Some of our goals we have achieved," Mr. Reynolds said.

"Others we have not. Disappointingly, there is still devisiveness in this industry; some shipping lines refuse to cooperate to bring about a unified industry. This is the exception, however, rather than the rule. Ninety percent of the industry pulls together. It is our hope that the small amount of devisiveness still poisoning this industry will be overcome, and the American merchant marine will be an increasingly effective and dynamic force to be reckoned with in international trade and the pride of a nation determined to rebuild its seapower." AIMS, Mr. Reynolds added, has been "most active" in 1973 in working with industry and Government to achieve the goals set forth in the 1970 Merchant Marine Act's shipbuilding program. "There is renewed vigor in our industry today," he said, "with new high-capacity ships being added to the roster at an unprecedented peacetime pace. American exporters and importers, in the liner trades, are becoming increasingly U.S.-flag conscious, and a new fleet of large bulk carriers is coming down the ways.

New names and faces are joining the group of traditional U.S. ship operators — another sign of vigor and growth." As to the U.S. fleet's 'future. Mr.

Reynolds said: • U.S. liner vessels will be increasingly competitive on major U.S. foreign trade routes and, in many instances, will transport more than 50 percent of the available liner cargoes on certain routes.

• The U.S.-flag bulk carrier segment, after years of antiquity and oblivion, will reappear with new highly innovative ships in our nation's international commerce, carrying liquid and dry bulk cargoes safely and economically throughout the world.

• U.S. maritime labor and management will continue to work together in a "new era of harmony" that has become apparent in recent years, and • The U.S. merchant marine, after a changeover from a U.S.

Government attitude of neglect to a positive policy of support and encouragement, will finally realize a long-sought goal: to become an indispensable force in U.S. economic, political and defense planning without Which the nation cannot function effectively in peace or war.

Mr. Reynolds cited these problems U.S. ship management faces in 1974: • The current energy crisis, despite shipping's cooperative effort to adopt every feasible conservation measure, is a severe burden to an industry which needs adequate amounts of bunker fuel at a reasonable price for its ships.

• Some U.S. Government departments still treat the industry as a "whipping boy." The Department of Defense continues to pursue a policy designed to drive military cargo rates down to rock bottom in an era of rising costs, and the Department of State still appears to view the welfare of the U.S. merchant marine as a minor expendable piece on the chessboard of international affairs.

• Overtonnaging and predatory rates are a major disruptive influence, and pressures from wellmeaning but overzealous environmentalists threaten to disrupt U.S.

shipbuilders and operators with their advocacy of impractical and unnecessarily restrictive constructive standards and opposition to the efficient use of deep - draft vessels.

However, Mr. Reynolds concluded : "Without minimizing these problems, I envision the next five years as promising ones for the U.S.-flag steamship industry—a period of stability, growth and economic maturity for a new and exciting marine technology." 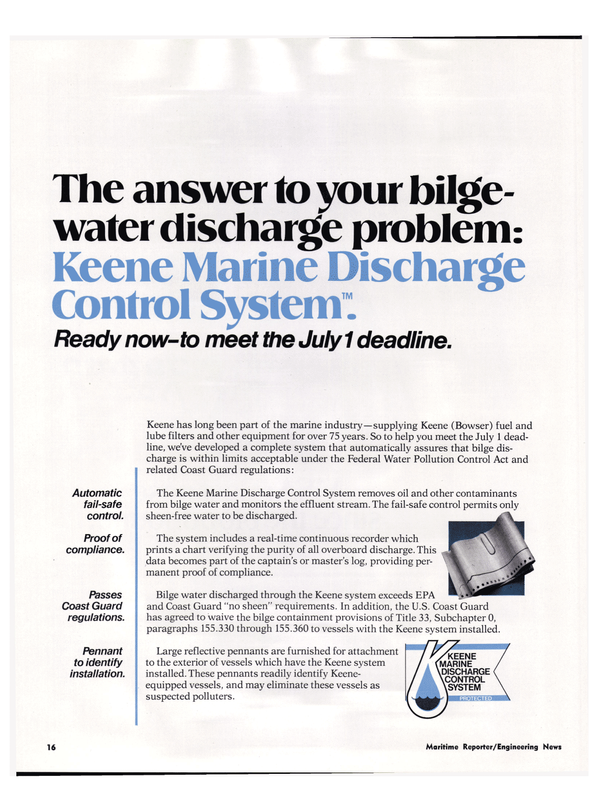