Austal USA in Mobile, Ala., has progressed steadily with its 82-ft. (24.9-m) High Speed Catamaran, which was designed specifically for the U.S. market.

While several companies have expressed an interest in this vessel, no firm contract has been signed. Austal USA, which is currently seeking out a firm offer, encourages interested parties to contact them directly in Mobile, Ala.

The Austal Design team in Australia has experience in designing catamarans and monohulls in the range from 80 to 330 ft. (24.3 to 100.5 m), with speeds from 20 to 50 knots. This design group also, uniquely, benefits from being part of a shipbuilding group where lessons learned from vessels built and in-service are constantly being fed back to make each new vessel a step up in functionality and maintainability.

The Main Deck was designed around a 3-5-3 arrangement with 36-in. aisles as required by the 1990 Americans with Disabilities Act (ADA). Access to meet ADA in fact makes the aisles 6 in. more than USCG require, thus adding one ft.

to the beam of the vessel.

The concept for this vessel was that it would work as either a Subchapter T vessel (149 seats or less) or Subchapter K (150 or more). Thus the Main Deck was designed around the potential of 149 seats (supplied by Beurteaux), which can be achieved by removal of the kiosk/concession midships, replacing with an extra 18 seats.

Speed and economy were important design goals and an appreciation of the types of routes this vessel would operate plus a strong awareness of the need to minimize wake wash, which is a critical issue in the U.S. environment) led to a speed of 25 knots, which also meant that fixed pitch propellers could be used, further keeping costs down.

The vessel's required 2 x 1,100 hp installed power comes from twin Caterpillar 3412E diesel engines, which will drive fixed pitch props through ZF BW 190 CB gearboxes although at this time a potential customer's preference may lead to this being changed to Twin Disc.

Fuel consumption is a low 111 gallons per hour for the main engines at full power. 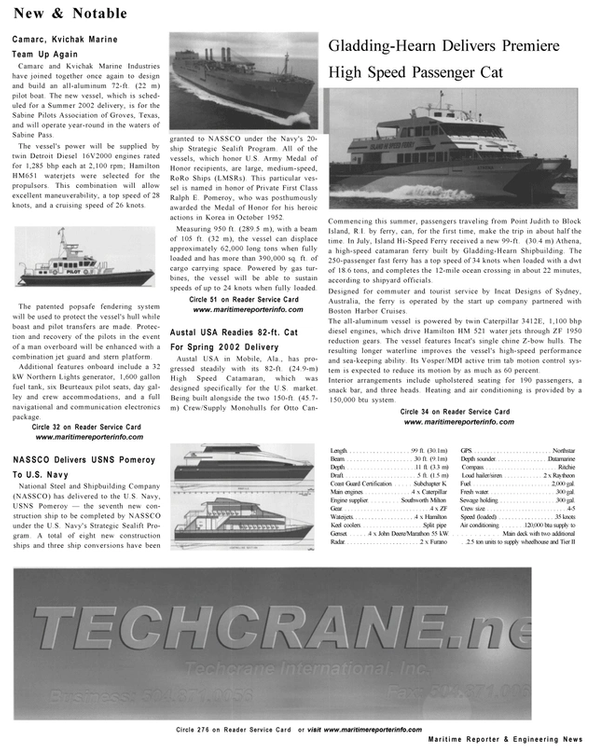