"The Daniel McAllister has been a historical boat in this firm for the reason that I am going to tell you right now. She was built, to my recollection, around 1906. I think she was built in Athens, N.Y., on the Hudson River. She ran for 26 years as a coal burner steam tug, noncondensor, which meant that the steam was going up out into the air and they had to get fresh water every day. It took hours to get the tank filled up. She'd turn it into steam to run the engine, and then she'd push it out through the exhaust into the air, not recondensed and used over like the later boats. By 1927, it was impossible to run her anymore as a coal burner and it wasn't worthwhile to convert her to oil because she was too low powered and too small. But diesels were then beginning to become a possibility for marine propulsion. I bought a 375 hp air injection diesel engine and when I came back and told my father that I had bought it, he fired me, because I had spent $13,000 of money that he didn't think he could afford.

However, I had committed the company to the engine and he took it. Thereafter I induced him to let me tear out the steam engine and put the diesel in the Daniel, with all diesel auxiliaries, replacing the steam auxiliaries. There were practically no people in the port in the engineering field who knew about diesel engineering. So, having written my thesis on graduation from Stephens about the marine diesel engine, I was qualified to do what I hooked up to do. Anyway, by 1927 or eight, I had her completed and operating.

Now before they converted her from coal and steam to diesel engine, the boat used to burn five or six tons of coal a day, at five or six dollars a ton in those days. She had to go for coal every day, or every second day, depending on how many hours she worked. She also had to go to the water dock almost daily to get water. This took up a lot of her operating time. When I put the diesel engine in her, I practically doubled the horsepower in her from 200 to 375. She ran, she burned 10 gallons an hour at $0.04 a gallon, or $0.40 an hour. So if we ran her for 10 hours, it was four dollars a day for fuel instead of 25 or 30.

Not only that, we didn't have to get fuel in her but only once a month. She didn't have to go for water or coal. This gave her much more operating hours. Although my father criticized me terribly for having done it, after she was running awhile, saving all that money, he started bragging to everyone about what his son from Stephen's Tech had accomplished.

But he would never admit it to me. His friends would come and tell me. She ran all the way into the Second World War with that engine." — Excerpts from an interview with Anthony J. McAllister, April 15, 1980 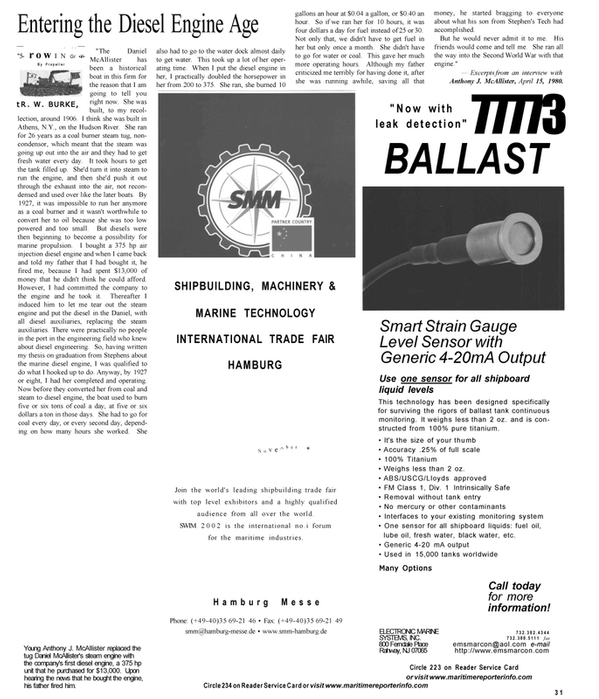