More Muscle for a Distinctive Breed

Open-hatch bulk carrier technology, championed by specialist operators in the North American trade, is to be taken an important stage further through the adoption of deck gantries promising gains of up to 50 percent in cargo handling productivity. Whereas a 40-ton lift capacity is the norm for the traveling cranes fitted on such vessels, which are typically heavily involved in pulp and paper transportation, each of a new series of 48,000-dwt bulkers is to be equipped with a pair of Konecranes- Munckloader gantries plated at 68-tons apiece.

Designed for optimized handling and stowage of a wide range of unitized forestry goods, industrial cargoes, and containers, with the hatchways opening out to the full width of the holds, the latest newbuilds have been ordered from Oshima Shipbuilding. Singapore-based contractual owner Masterbulk will assign the four vessels to Star Shipping, which it jointly owns with Grieg Shipping of Norway.

Engineering and the key components for the deck gantries will be supplied from Konecranes VLC in Finland, although the crane structures will be manufactured and assembled in Korea by Daewoo. The cranes will be barged in fully-erected form to Japan, for installation by Oshima, in readiness for vessel handovers in 2003/2004.

Crane throughputs of up to 1,200-tons per hour are anticipated with the new equipment, signaling an important advance over a rates of around 800-tons per hour attributed to 40-ton units fitted to 39,000-dwt open-hatch bulkers commissioned in 1999/2000. A current series of newbuilds with 40-ton capacity cranes from the same stable is expected to achieve around 900-tons per hour per unit.

The significant growth in lift capacity and corresponding improvements in ship turnaround performance have been secured with only a marginal increase in equipment weight, so that revenue-earning deadweight is scarcely penalized.

Masterbulk is understood to be considering upgrading the cargo handling outfit on its preceding series of 39,000-dwt open-hatch bulkers, which used two 40- ton Konecranes-Munckloader gantries manufactured and fitted in Finland.

The ships came from Stocznia Szczecinska.

Stocznia Gdynia ordered a total of 14 cranes from Konecranes for a series of seven 40,000-dwt vessels due to be delivered to Westwood Shipping Line of the U.S. during 2002-2003. The age profile of the world fleet of open-hatch bulkers, reckoned to number 159 ships, suggests a steady replacement newbuild demand over the next 10 years. 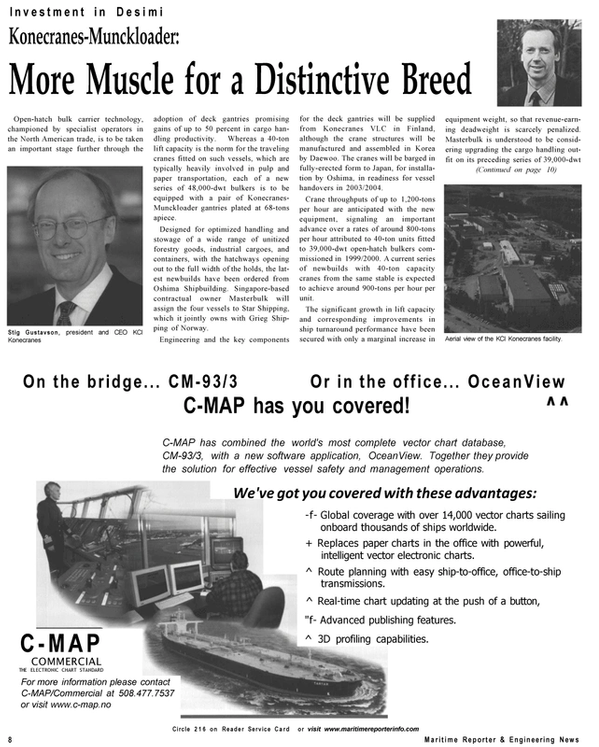