Foss is Upbeat on the Arctic

To support growing Arctic business, Seattle-based Foss Maritime Company is building three ocean-going tugs at its Rainier Shipyard in Oregon on the Columbia River. These 132 feet-long, Ice Class vessels will have strengthened hulls designed to withstand the harsh, Arctic climate conditions into which they will eventually be deployed. Work on the tugs began in July, and the first in the series will be delivered in December 2014. With roughly 1,000 employees, Foss now has 175 people working in Alaska and the Arctic, servicing oil and gas, mining and other sectors. The company has a positive, long-term view of the region’s business climate.
Founded in 1889, Foss maintains one of the largest U.S. West Coast fleets of tugs and barges, and has transportation operations in all major ports there. The company runs two shipyards and offers maritime services and project management to customers in the Pacific Rim, Europe, South America and around the globe.
Last month, MarineNews spoke to Mike Lauer, Foss’s director of marine transportation; and Dan Cole, project manager for Arctic tug construction, about the new vessels and the environment where they’ll work. Lauer said Foss decided to build the three boats as part of its ocean-tug-fleet replacement and modernization program. “We chose this class of tugs based on our view of immediate demand and where they’ll fit in our fleet mix,” he said from Seattle. The Foss world fleet contains over 150 vessels, including twelve vessels in the Arctic. Eight of those are Arctic tugs.

Expanding Shipyard Capabilities
Dan Cole said the company’s Rainier shipyard expanded to build the new tugs. “Through improvements to the yard, we increased our fabrication areas and have hired additional staff,” he said. “We started cutting steel in June of this year and laid all the keels in July. We’re proceeding with construction for deliveries in December 2014, Dec. 2015, and Dec. 2016.” As for customers, “we have oil and gas projects we’ve been awarded, and plan to use these three, new tugboats for those projects,” Lauer said. “Primary, initial areas of deployment will be projects associated with Alaska and the Arctic.” Cole noted that the three tugs under construction are designed to work anywhere around the globe.

State-of-the-Art, Built to Last
The tugs have special environmental capabilities. “They are classed with the American Bureau of Shipping, including Ice Class and Green Passport,” Lauer said. “Ice Class means these tugs can operate in light ice conditions. They can negotiate through light, first-year ice. But they aren’t designed to break ice. They’re able to operate in cold ambient air and sea water temperatures.” The tugs will have Green Passports or inventories of hazardous materials. Those documents are intended to keep workers on board, or when a ship is decommissioned, free from exposure to asbestos, PCBs and other threats.

“The tugs will be certified for SOLAS, the International Convention for the Safety of Life at Sea requirements,” Lauer said. SOLAS requirements include on-board rescue boats and maritime, electrical and fire safety systems and devices. Beyond this, the new tugs will incorporate the latest technology for harsh Arctic conditions. “To reduce the exposure of employees who are working on deck, making or breaking tows or handling anchors, we’ve added shark jaws, tugger winches and tow wire hold-down hooks,” Lauer said. Notably, the three tugs will have Markey double drum TDSD-40 diesel towing winches and have a bollard pull of 100 metric tons.
“These winches integrate safety features, like the slip-brake mechanism that accommodates momentary high loads in the tow wire, along with a back-up, electric come-home feature that allows us to always safely haul in the tow wire,” Lauer said. Cole said the vessels will be certified by the U.S. Coast Guard  in accordance with 46 Code of Federal Regulations, Subchapter C, for uninspected vessels, and will meet the (pending) proposed safety rules of Subchapter “M” for new towing vessels.

Foss: Looking Up and Heading North
Lauer said the Arctic business climate is favorable. “Foss is bullish on opportunities in the immediate and long term with regard to resource extraction of oil and gas, mining and minerals. Precious and industrial metals and rare minerals are mined in the Arctic. These are areas in which we provide marine support.”  He added that the company makes decisions based on the long haul. “If it’s an oil project, we might work on it for 15 years before the specific oil field comes into production. The near-term outlook for oil prices doesn’t necessarily correlate with our current level of activity.”
In recent years, Foss has expanded its project work to Arctic, particularly Alaskan, oilfield services. Last  summer, the company dedicated four tugs and two barges to delivering oilfield modules to a development project near Point Thomson, 60 miles east of Alaska’s Prudhoe Bay. An estimated 8 trillion cubic feet of natural gas reserves exist at Point Thomson, along with lesser quantities of a natural gas liquid called condensate. Pools of oil lie near that field. ExxonMobil is the owner and operator of the largest share in Point Thomson, BP is a significant owner and ConocoPhillips has a smaller stake.
Foss vessels have worked with Spartan Offshore in its search for oil in Cook Inlet, and the company’s Marine Transportation Division assisted Shell Oil in exploratory drilling in the Arctic. Royal Dutch Shell Plc, however, said last February it wouldn’t drill for oil in Alaska’s Arctic seas in 2013, following setbacks in 2012. Shell sent its two Arctic offshore rigs to Asia for repairs and upgrades last year. Arctic oil nonetheless remains appealing, particularly given political unease and safety concerns in many other producing regions.
Separately, and since 1990, Foss has transported tens of millions of tons of concentrated ore for Red Dog Mine, one of world’s largest zinc concentrate producers, located 200 miles north of the Arctic Circle. Foss developed self-loading barges to transfer that ore to bulk carriers from a shallow-draft port. The mine operates under an agreement between the NANA Regional Corp., Inc., a Native company owned by the Inupiat people, and Teck Alaska Inc., a subsidiary of Teck Resources Limited in Canada.
To that end, Foss has a seasoned Arctic workforce. “Our Arctic crews are a mix of Pacific Northwest and Alaskan people,” Lauer said. “The vast majority have many years of experience operating in Alaska. A very large part of our ocean transport projects are Arctic or Alaska related, and a majority of our ocean force can work in that region.”

New Frontiers: New Business, Distinct Challenges
In December, Foss entered a joint venture with ASRC Energy Services Response Operations, LLC. “AES-RO is owned by the Arctic Slope Inupiat and is a leading provider of energy and resource-development services in Alaska,” Lauer said. “We look forward to providing our customers with new offerings combining AES’s strengths in contingency response and onshore services with our offshore and near-shore marine fleets. And we see this venture as a way to provide professional maritime careers to the Inupiat people, who truly understand and respect Arctic challenges.” The Inupiat are native Alaskans, comprised of two groups: the Taġiuġmiut or “people of the sea,” living on or near the north Alaska coast, and the Nunamiut or “people of the land” in interior Alaska. The joint venture, called AES-Foss Marine, LLC, will be headquartered in Anchorage.
Compared with its other business sectors, Foss’s Arctic operations require much greater planning and preparedness. “If something goes wrong, the Arctic’s remoteness makes a big difference,” Lauer said. “If a crew member is injured, it could be days before we can get him to a medical facility. There is no infrastructure and no local vendors to assist. You have to prepare for what might arise and outfit the vessel in case a piece of machinery breaks down. We need to have extra equipment on board. The extreme climate is unforgiving. We must have people who can work in that environment.”
As for climate change, “scientific evidence shows the ice-free season is increasing and the extent of summer sea ice is declining, but we’re still going up at the same time and coming back at the same time,” Lauer said. “In practice, nothing has changed. Our crews cross the Bering Strait in Alaska in early July during the ice breakup, and come back in mid-to-late October when things start to freeze.”
In the regulatory arena, “we’re monitoring new Bureau of Safety and Environmental Enforcement rules related to offshore drilling, along with discussions about implementing the Polar Code, which is in draft format now,” Lauer said. BSEE is part of the U.S. Dept. of Interior. The Polar Code is a proposed, international regime for safely operating ships in frigid waters.
Foss anticipates other participation in the Arctic. “But most of our projects are covered by nondisclosure agreements so we’re not at liberty to talk about much of what we’re planning,” Lauer said. “Our customers release the details first.”
Last July, Foss Marine Holdings merged its operations and resources under the name Foss Maritime Company. According to its mission statement, Foss intends to meet customer needs and expand globally, while providing quality work and pursuing safety with a world-class workforce nurtured by respect. The last part will be especially important in the unforgiving environment of the Arctic, where protecting the environment of the people who call it home is arguably Job ONE. With state-of-the-art equipment, years of deep cold weather operations experience and a seasoned workforce, that shouldn’t be a problem for Foss.
Temporarily quiet in the frozen North, even as the lower 48 energy situation overheats, Foss patiently is laying the groundwork for what they believe will come next. That’s because – and no pun intended – Foss is in for the long haul in Alaska. With their new response and services partnership just getting underway, that’s reason enough for everyone to be upbeat on the Arctic. 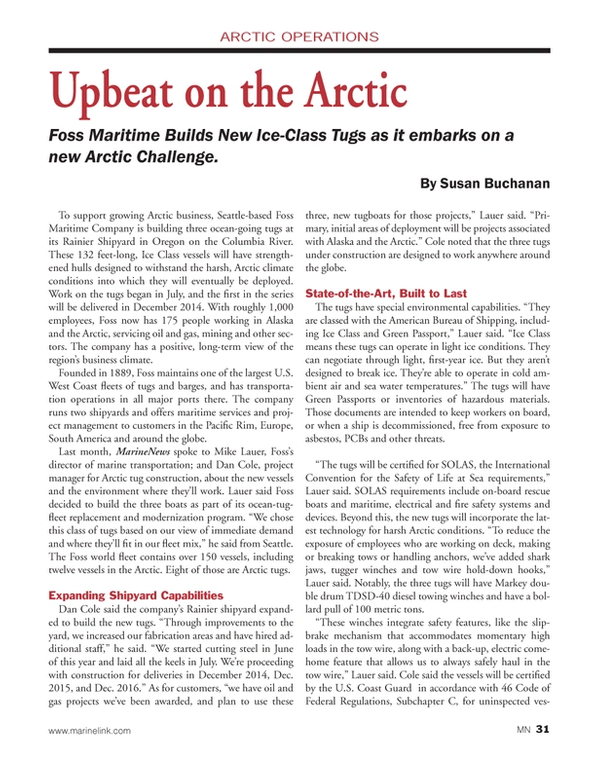 Read Foss is Upbeat on the Arctic in Pdf, Flash or Html5 edition of January 2014 Marine News