The crew of the Jason E. Duttinger took a break from hauling coal between Plaquemines Parish, Louisiana, and Florida on Oct. 30 as Kirby Corp. of Houston christened the articulated tug-and-barge unit in New Orleans at the dock of the Hilton Riverside Hotel. Both units were named in honor of two special individuals.
Jason Duttinger was a senior transportation specialist at North Carolina-based Duke Energy when he died of cancer in 2011. Winna Wilson was the wife of Archie Wilson, president of Dixie Carriers, Inc., which was acquired by Kirby in 1969.
At the ceremony which took place alongside the Mississippi River, Joseph Pyne, Kirby’s president and CEO, told dozens of guests about the company’s longstanding relations with Duke Energy and Dixie Carriers. Employees, friends and family are the fabric of any flourishing business, he said. Duttinger’s wife Cheryl said her husband valued his colleagues, and always had his laptop and cellphone by his side so co-workers could reach him during the couple’s getaways with their two children. A Duke Energy colleague described Duttinger as “a bulldog, an advocate of doing the right thing, not just the easy thing.”
Winna Wilson’s daughters remembered their mother as “a super wife,” and said they were delighted that she now has “a super barge” named after her. Members of the Duttinger and Wilson families said they were pleased to be able to meet for the first time. Cheryl Duttinger smashed a ceremonial bottle of champagne over the side of the tug, and Wilson’s daughters christened the barge.
The Jason E. Duttinger carries coal from Louisiana to power plants in Florida and then returns to Plaquemines Parish, making four round trips a month, Captain Carl Brennecke said from the deck before the ceremony. He clambered up and down stairs as he showed visitors the vessel’s wheelhouse and spacious, well-appointed living quarters. Brennecke pointed to television and internet connections and private baths, and said living conditions on vessels have improved greatly since his career began 38 years ago. The Duttinger has a crew of eight, but can sleep up to ten people. The crew was present for the christening and escorted visitors around the vessel.
The Duttinger, coupled with the Winna Wilson, is more than 600 feet long overall. The ATB was built at Signal International’s Orange, Texas facility. When they were constructed, Signal also built the Captain Donald Lowe Sr., with the barge Margo Dale, for Kirby, Brennecke said.
The Duttinger tug is 125 feet long, with a beam of 42 feet and a maximum draft of 22 feet, and it is powered by twin EMD 12-710G7C-TC 3,000-hp engines. The tug has an EMI hydraulic steering system and triple NautiCan rudders. The deck holds a 12,125-pound-capacity crane. The Winna Wilson barge is 490 feet, with a 90-foot beam and maximum draft of 36 feet. Ocean Tug & Barge Engineering in Massachusetts designed the Duttinger, the Margo Dale and their matched barges.
Jason Duttinger’s mother, Marlene Cavellier, who drove down from upstate New York in October, looked out from the tug’s wheelhouse, and said that her son loved his job at Duke Energy. He was also fond of New Orleans and would have been moved by the event at the port, she said. After the vessel tour and the ceremony, relatives, friends and coworkers shared stories about Duttinger and Archie and Winna Wilson at a buffet dinner at the Hilton as the sun set over the river.
Under the guidance of Joseph Pyne, Kirby has swelled from a medium-sized, inland-tank barge firm in the 1980s to a diversified company, offering inland and offshore transportation services, along with engine systems. The company’s transportation subsidiaries operate inland tank barges, inland towboats, coastal tank barges, coastal tugboats, offshore dry-cargo barges, offshore tugboats and a docking tugboat. Today, Kirby’s inland fleet represents more than a quarter of U.S. inland tank barges, and its coastal vessels comprise over one-fifth of U.S. coastal tank barges. 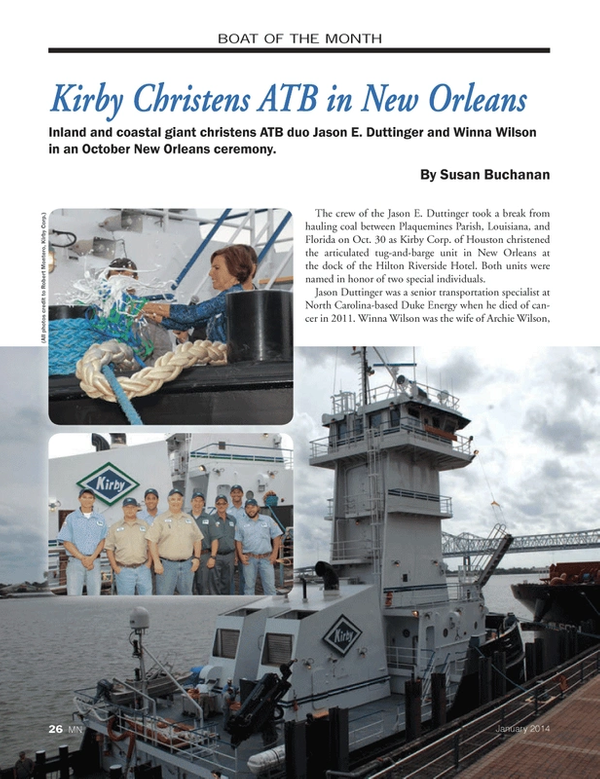