The latest surge in blue water shipbuilding and the seagoing billets that those jobs create is a welcome change for a domestic maritime sector that had seen nothing but decline for the past four decades. Still, and from a training, demand, and recruitment point of view, the brown water sector is arguably the place to be for today’s aspiring mariners. That’s because increasingly sophisticated equipment, expanding fleets and a much tighter regulatory regime are creating the demand for ever more mariners. The nation’s maritime academies are responding with curriculum that reflects what is actually needed, changing to meet the times. One such place is the Massachusetts Maritime Academy.   The industry is desperate for these (brown water) graduates. This year, a fall job fair at the school featured 76 companies looking to fill 550 jobs. A list of 28 recent Marine Transportation (MT) graduates shows 20 going to three companies in particular: Kirby Inland Marine (13), G&H Towing Co. (4) and Crowley (3). These inland companies are also taking the place of the blue water ships that used to provide internships for MAA students.
Incoming students have also taken note: MMA’s freshman and sophomore classes are showing a significant increase in selecting the USCG license programs. The number of MT candidates stands at 94 for the fourth-class cadets, versus 65 for the seniors, while the number of freshman marine engineering majors (161) contrasts sharply with their senior counterparts (78). Reversing a two decade decline in license-track cadets, 64% of the freshman and sophomores are on a Coast Guard licensing track for both deck and engineering officers; up sharply from 44% of MMA upperclassmen. Looking at recent license-track graduates, 10% of the licensed cadets went ashore at graduation (all engineers), while 55% of the entire 2012 graduating class are working ashore (Power plants, Hospitals, civil service, environmental cleanup, defense contractors, armed forces). That demographic could well be changing in the very near future. Whereas previous generations of cadets slowly eschewed the life involving long trips – sometimes extending 4 to 6 months or more – at sea, brown water candidates tend to work in much shorter rotations, sometimes as little as two weeks at a time. Rapidly escalating pay scales, pushed by a shortage of qualified officers, is making the brown water sector an increasingly attractive choice for today’s graduates.
Comparisons of a shifting employment picture: MMA’s gradual change in curriculum to meet industry demand, is telling. The shift from 2012 to 2013, for example shows that while fully 85 percent of 2012 graduates who chose to go to sea did so in a blue water role, that number shrank drastically to just 51 percent for the class of 2013. That number is also reflected in the whopping change in the number of graduates who chose Military Sealift Command billets – primarily blue water service – in 2012 (63%) and 2013 (39%). Finally, another key statistic shows that while almost 15 percent of the Class of 2012’s license-track graduates who went to sea, did so on foreign flag vessels, none of their colleagues from the class of 2013 chose that route. The seismic shift reflects a robust U.S. flag demand for qualified personnel – you guessed it – primarily in the brown water sectors. Not only are the cadets at Mass. Maritime returning to the water and the roots of this storied, oldest continuously operating maritime academy in the nation – they are gravitating to brown water billets. The indicators are obvious:
“Go Brown, Young Man (& Woman), Go Brown.” 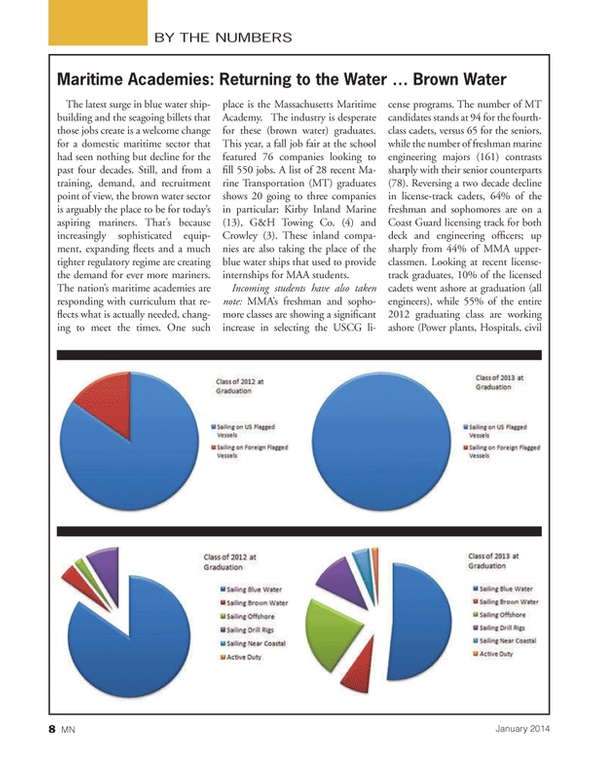