You say you don’t work on an LNG ship? You should care nevertheless.

Just ten years ago, LNG Import terminals were being built and/or contemplated throughout the United States. Then, it was widely expected that Liquefied Natural Gas (LNG) imports would account for a large percent of the energy consumption in the US. Fast forward 10 years and we find that industry has made a complete 180 degree turn around. Instead of the US being one of the world’s greatest importers of LNG, it is more than likely that the United States will one way be one of the major exporters of this frigid liquid. This is due, in part, to the vast quantities of natural gas that can be released in the relatively new process of Hydraulic fracturing, a process of creating fissures in underground formations that allows natural gas to flow.
The LNG industry in the US will experience a slowdown as import facilities go through the approval process and are re-built to become export terminals. Many new export facilities are also planned. Attesting to this situation, a substantial list of export applicants can be viewed online at: http://energy.gov/sites/prod/files/2013/09/f2/LNG%20Export%20Summary_1.pdf.
But what about the title of this article? If you work in the marine industry and are not directly involved in the import or export of LNG, why should you care about this product? Pollution controls and restrictions on the marine industry are mandating a reduction of pollutants and greenhouse gas in the exhaust of marine vessels. This environmental concern along with the relative cost effectiveness of LNG will mean its use in fueling marine vessels will be probably be widespread, within in a few years. Hence, no matter what type of workboat on which you operate, there is a good chance that you may be working with or around LNG.

On the Horizon
LNG is coming on the water on this side of the pond – that much is certain. Harvey Gulf International Marine has ordered the first of at least six liquefied natural gas-diesel dual fuel offshore supply vessels and may order as many as 10. Tote’s recently announced plans to build the first container ships to use LNG as a “primary” fuel source and the Matson contract With Aker Philadelphia Shipyard for Two New “Aloha Class” dual fuel powered Containerships will lead the way for others to dips their toes into the water. But, even if your own vessel is not powered by LNG, you may still be in close proximity to this type of fuel. LNG bunkering facilities and bunkering vessels are also in the works. Away from the marine environment, many trucking companies, railroads, factories, and power plants are also investigating the use of LNG.

Physics & Firefighting
LNG is the cleanest burning fossil fuel and is the liquid form of natural gas. It is reduced in size 600 times as it is cooled to minus 260 degrees Fahrenheit (-1600 c) which makes it cost effective to ship. It is lighter than water and also lighter than air (after warming). A colorless and odorless liquid, it is stored and shipped at atmospheric pressure. Due to its clean burning properties, LNG may extend engine life and engine performance may be increased. For most workboat operators; gasoline or diesel fuel is still the fuel of choice. Blue water sailors may (still) be working with heavier bunker fuels. In all cases, these mariners have been trained to handle fuel fires with foam, CO2, Halon, and water.
LNG requires a change in thinking. Dry Chemical is the extinguishing agent of choice if the fire is to be extinguished. Once LNG reverts back to a gas it is the same natural gas marketed for home use, except that it is virtually odorless because all impurities have been removed prior to liquefaction. If extinguished, the remaining liquid will continue to vaporize into an odorless and colorless natural gas. If it accumulates in a confined space and finds a source of ignition it could explode. LNG will not explode when unconfined. For that reason alone, and when feasible, it may be best to allow the fire to consume the LNG while protecting and cooling exposures.
Those working directly with the LNG transfer during bunker operations you will need to know much more about the product and the bunkering process. LNG is almost pure methane. Prior to any bunkering several steps will need to be taken to ensure that the transfer lines are purged of contaminants and cooled. Remember, LNG is a cryogenic liquid meaning that it is super-cooled to -260 F. At that temperature the liquid would cause severe injury to any exposed flesh that it contacts. It would also cause any common steel to become brittle. For this reason, all piping for LNG transfer and fuel lines within an LNG powered vessel must be made of stainless steel or high nickel content steel. The piping itself will not only be made of these special alloys, it will have to be of a special design in certain areas of the vessel.
The International Maritime Organization (IMO) will be issuing regulations regarding LNG fueled vessels in the near future but for now the “Interim Guidelines” call for specific pipe design in various areas of a vessel. In certain areas, the fuel lines will need to be doubled walled with either an inert gas present in the outer chamber or air circulation through this chamber.
There will be many new fuel handling procedures as well as new types of equipment with which the vessel’s engineer must become familiar. There will be numerous safety and emergency shutdown systems installed which should stop the fuel transfer immediately if any of the redundant precautionary systems detect an emergency or are not operating properly.

Training & Regulations
It is being suggested that several different levels of training be provided for all members of the crew aboard an LNG powered vessel. Just what this training will consist of and how it will be provided will be decided in the very near future. To be sure, at the very least, all crew members will have to know the properties of the fuel which is going to propel their vessel. But, LNG powered vessels are so new that the regulations and design specifications are struggling to keep pace with new innovations and technologies. As the IMO works on “interim guidelines” with hopes of issuing final guidelines next year, so too is the U.S. Coast Guard is being tasked with approving new LNG powered vessel designs. While permanent guidelines are being worked out, each new request for an LNG powered vessel design is being handled on a vessel by vessel approval process.
Still to be hashed out completely be the location of any LNG storage tanks aboard an LNG powered vessel. Some designs are proposing locating these tanks below accommodation spaces whiles others want this area excluded. Separately, LNG powered vessels in Norway, which have been operating LNG powered vessels for several years, have some of the LNG fuel tanks in that location. For those with security concerns, the location of LNG tanks on an exposed, open deck might signal an inviting target for terrorists. LNG transport vessels have, in the past, been able to rely on the safety of their double hulls. Arguably, though, a Rocket Propelled Grenade (RPG) might breach an LNG tank but would not cause an explosion. More likely, it would ignite any leak and just burn at the source of the leak. On smaller LNG powered vessels will this still be the case and will the crew and passengers be at risk as the leak burns.
As the use of clean LNG as a fuel for vessels, locomotives, power plants, trucks, and cars ramps up, this is an exciting time in the history of marine propulsion. From oars to sail, to wood, to coal, to diesel and bunker fuel, and now to LNG, the prospects for a significantly cleaner and more efficient maritime industry are bright. For its part, the new IMO regulations will address safety concerns as the maritime industry embraces this new era in energy use. LNG enjoys an unprecedented safety record on the water. That said; and regardless of where you are on the waterfront – ashore, afloat or training to get there – greater awareness of LNG is needed. 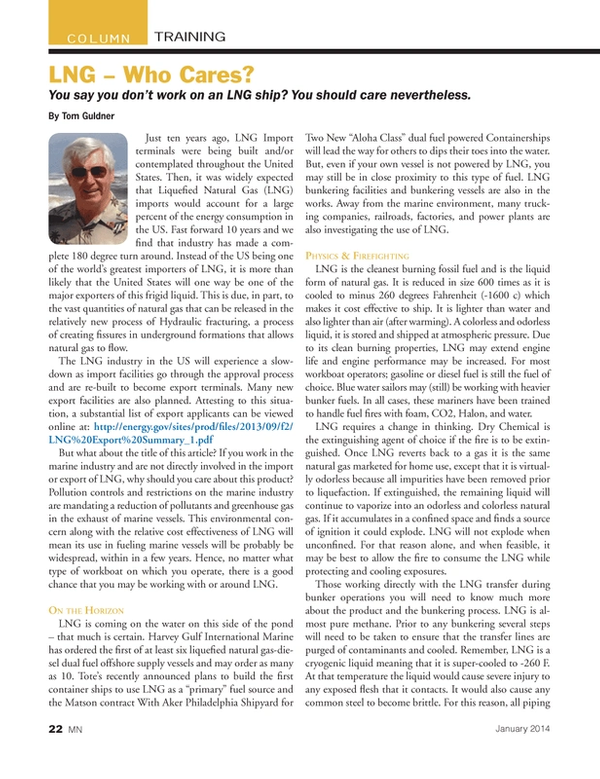