Barging Ahead in Uncharted Waters

A Real-Life Study in Creative Vessel Financing, or What Happens When Plan ‘A’ Is Not Working.

Much has been written on the various structures and approaches that can be used to finance the construction and purchase of vessels. Such articles typically speak in general terms, presenting what might be called the textbook version of the approach under consideration. But what happens when reality rears its ugly head, and forces the deal to leave the well-marked channel and to venture into uncharted waters?

A recent real-life experience shows how creativity and flexibility can salvage a financing transaction that otherwise would not have appeared to be feasible if measured only by the textbook model. There is, of course, a certain risk in presenting a real-world case study: its pedagogical usefulness might be perceived by some as being limited to the particular circumstances of that specific situation, providing only limited guidance when the facts are different. This account of how certain issues arose and were resolved in a particular case is not presented with the expectation that it will become a template for many other transactions. Rather, it is offered in the hope that it will encourage business teams and their counsel to continue to be patient, creative and flexible in getting deals done.

Real Life, Real Plight
Our story begins with BargeCo (the names have been changed, as Sergeant Joe Friday would say, to protect the innocent), a company that wished to purchase a new inland waterways tank barge for its fleet. For various reasons, BargeCo’s balance sheet would not support conventional loan or lease financing from the financial institutions that were the usual sources of financing for this type of vessel.  Word of BargeCo’s plight reached HopperCo, which was a provider of barge freight in the inland waterways dry cargo market. HopperCo had the creditworthiness to obtain the kind of financing that BargeCo needed, and it had the flexibility to assume more risk than would typically be acceptable to a financial institution, but HopperCo did not have a current interest in acquiring tank barges.

HopperCo agreed to use its credit standing to obtain the financing that BargeCo needed, in return for BargeCo’s agreement to pay HopperCo amounts sufficient to cover the periodic financing payments plus a premium to compensate HopperCo for assuming the additional risk. Since HopperCo did not want to own the tank barge, one way to have structured the transaction would have been for HopperCo to obtain the lease financing in the form of a “hell or high water” bareboat charter from a financial institution’s equipment leasing affiliate, and then to enter into a bareboat sub-charter with BargeCo. However, HopperCo did not want to be either a direct owner or a demise owner of the tank barge.

In itself, such an arrangement was hardly novel. The leasing company-bareboat charter-time charter structure has been used for many years for credit-worthy companies to obtain the use of vessels as time charterers with operational control and responsibility for the vessel vested in a bareboat charterer. In this case, however, the credit-worthy time charterer, HopperCo, did not in fact want the use of the vessel. In order to convey its rights as time charterer back to BargeCo, it was agreed that HopperCo would grant a time sub-charter to BargeCo. The time sub-charter, however, did not have the unconditional payment obligations that were required by the leasing company in the time charter, since the leasing company was not looking to the credit of BargeCo to support the financing.

So far, so good. The leasing company had the necessary credit support from HopperCo; BargeCo had operational control and responsibility for the vessel under the bareboat charter and the right to direct the use of the vessel under the time sub-charter; and HopperCo avoided ownership of the vessel and would be compensated for assuming the risk of BargeCo’s lesser credit standing.

This at first appeared to be a major roadblock. In fact, the initial reaction of the leasing company’s counsel was, “the deal is probably dead.” But the underlying agreement between the leasing company and HopperCo remained the same; namely, that HopperCo was to be the credit support for the transaction. Based on this fundamental agreement, counsel for the leasing company and for HopperCo were able to find a solution. They took advantage of a document called the Agreement to Acquire and Charter, which is a standard component of vessel lease financing transactions. This document typically spells out the conditions and other documents that are required for closing, but does not usually have many on-going covenants that have application throughout the overall term of the lease financing.  Such longer term covenants and provisions are primarily found in the other transaction documents.

owever, the Agreement to Acquire and Charter had the advantage of being one to which all parties were already intended to be signatories. As such, it provided a useful setting for including newly drafted provisions designed to convey the commitment of HopperCo directly to the leasing company.

This approach had never been used before, to the knowledge of any of the counsel in the transaction, each of whom had more than 30 years of experience in maritime financing transactions. Therefore, it required that counsel work together to resolve a variety of issues and to craft the necessary language in order for the leasing company to be assured by its counsel that its recourse to the credit of HopperCo was as firm as it would have been had the usual transaction structure been followed. These issues included several provisions of the Bankruptcy Code that would be implicated in the event of a bankruptcy of BargeCo. In the end, the issues were resolved, the necessary language was worked out, and the deal proceeded to close. This might be as close to high drama as it gets in the world of vessel financing.

You might never encounter the exact circumstances and issues described in this article. But many readers will identify with the satisfaction that comes from the mutual efforts by the parties and their counsel to tackle difficult issues and to find solutions, often in unprecedented ways, so that the ultimate business goals of all parties can be achieved. 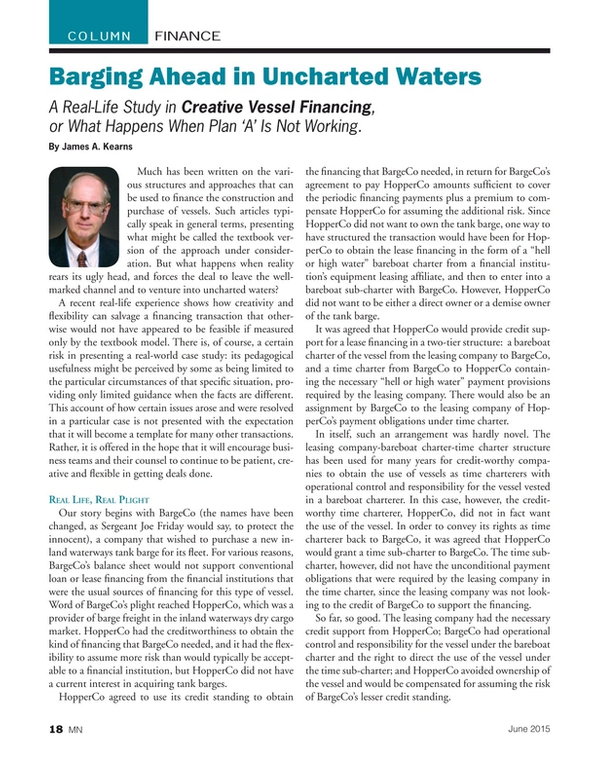 Read Barging Ahead in Uncharted Waters in Pdf, Flash or Html5 edition of June 2015 Marine News