Captain Jeffrey P. Novotny is Commanding Officer of the U.S. Coast Guard’s National Maritime Center in Martinsburg, WV. He is responsible for all activities related to professional credentialing, training and assessments of the nation’s 215,000 merchant mariners. He graduated from the U.S. Coast Guard Academy with a degree in Mathematics and Computer Science. Prior to commanding the NMC, he was the Deputy Commander at the Coast Guard’s Deployable Operations Group. His duties included the oversight and responsibility for all personnel, operational readiness and deployment of the USCG’s Deployable Specialized Forces supporting Operational and Combatant Commanders world-wide. He also served as the Interagency Strategic Planning Chief on the National Incident Commander’s staff for the Deepwater Horizon response. Eventually, he transitioned into the Marine Safety field and was assigned to Marine Safety Office New Orleans, LA. There he held numerous positions including Chief of the Marine Environmental Response, Chief of Facility and Container Inspection, Supervisor of the Operations Command Center and later, Assistant Chief of Port Operations. Following that, he was assigned as Chief, Port Operations of Marine Safety Office Wilmington, NC. Later, at Coast Guard Headquarters in the Office of Personnel, Workforce Forecasting and Analysis, he supervised the Enlisted Workforce Team, which tracked and monitored the 32,000+ personnel within the Coast Guard’s enlisted workforce. From 2006 to 2009, Captain Novotny completed duties first as Chief of the Prevention Department and then Deputy Sector Commander of USCG Sector Hampton Roads in Portsmouth, VA. Novotny holds a high profile position, one that the nation’s professional mariners depend upon, every day. Listen in this month as he sets the record straight on the current and future conditions at the National Maritime Center.

The new medical rules (known first through NVIC 04-08) had some bumps as they were implemented. Describe the status of that program today.
NVIC 04-08 was issued in an effort to bring standardization to the handling of various medical conditions reported by mariners on their 719K physical examination forms and in response to several major marine casualties tied to mariner medical conditions. The regulations published in December 2013 made no major changes to those standards but did introduce the Mariner Medical Certificate. Since January 2014, the NMC has been issuing medical certificates to each qualified mariner when processing an application that requires a medical evaluation. The NMC has issued approximately 26,839 medical certificates as of January 2015 along with 22 medical certification denials. Conditions that are determined to pose an inordinate risk for sudden incapacitation or debilitating complication may lead to denial of medical certification.

The frequency of medical exams has ramped up for some credential holders from 5 to 2 year intervals. Last year, NMC processed as many as 125,000 certificates. What’s the average time for this process and can you keep up with future demand?
Currently, the overall and net processing times for medical certificates are approximately 16 and 8 days respectively. This overall processing time (OPT) includes our internal NMC net processing time and periods which we are awaiting additional information from the mariner or their medical provider.  Since last May (2014), the OPT has remained less than 30 days. While the processing times have declined since the onset of issuing medical certificates, it has somewhat normalized to approximately 15-20 days over the last six months. At this point, we believe we’ll be able to keep up with the demand.

How many U.S. mariners are on some sort of “medical waiver” or another? What is the definition of a medical waiver?
Current Active MMCs with a medical waiver: 17,728.  A waiver is granted when, after review of all relevant supporting medical documents and consultation with the examining physician (if needed), even though an applicant does not possess the vision, hearing, or general physical condition necessary, extenuating circumstances warrant special consideration. In general, medical waivers are approved when an applicant does not meet the applicable medical standards, but objective evidence indicates that the condition is sufficiently controlled and the effects of any potential medication pose no significant risk to maritime and public safety. Medical waivers may be granted with specific conditions to which the applicant must adhere, such as more frequent monitoring of the medical conditions, submission of medical exams and/or tests at varying intervals, or operational limitations.

Since the inception of the medical NVIC, have medical waivers increased significantly?
As of April 2009 every mariner applying for an original, renewal or raise in grade has undergone the centralized medical evaluation process. Since 2012, the number of waivers issued has increased from 4,860 to the current number of 17,728. The number of applications processed through the medical division has also increased. The increase in waivers correlates with the standardization of the medical evaluation process, mariners supplying requested documentation and an increase in medical personnel, allowing for a greater number of applications evaluated.

You transitioned into Marine Safety in 1994, meaning you have a solid base of skills within this sector of the Coast Guard. How many others in your command can say the same thing? Has this career become a more mainstream path within the Coast Guard?
The NMC has a very limited number of active duty personnel (see below) assigned but we are very fortunate to have a number of very experienced civilians who have been part of the mariner credentialing program for many years. Within the active duty Coast Guard workforce, the Operations Ashore – Prevention career path (previously known as Marine Safety) very much exists today. Of the active duty personnel assigned to the NMC, we have a diverse group of officers with operational ashore, afloat and medical experience. Having active duty positions at the NMC allows for an exceptional blend of military and civilian leadership, management and expertise in key positions within the command.

What percentage of your WV Command is civilian and what percent is active duty Coast Guard. What’s the rationale, if any behind that split?
The NMC is authorized a total of 268 personnel billets, of which 10 are active duty military. The structure of the NMC is purposefully designed to maximize the expertise gained over many years of training invested in our civilian workforce, and leverage the afloat experience and leadership of our Active Duty members. For example, it takes several years to train a civilian Legal Instruments Examiner to review our most complex mariner credential applications. Losing that expertise in large numbers every couple of years would be debilitating. Being able to retain that civilian expertise, and cultivate it over a long-period of time (hopefully an entire career) greatly benefits the NMC and ultimately the mariner. Having a small contingent of active duty at the NMC allows the USCG officer corps to be exposed to credentialing and those officers rotate out every 3-4 years and spread their knowledge from their time at the NMC out to the field. Additionally, the officers bring with them recent operational, afloat and medical experience which greatly assists in the mission at the NMC.

Domestic mariner advocates like to make noise about the lack of performance in terms of credential throughput at NMC, especially in the wake of the consolidation of the 17 REC’s. But, what’s the real record in West Virginia?
Prior to consolidation of the NMC in 2008/2009, an application processing rate of 6-8 months was unfortunately not uncommon. A lack of process controls, non-standardization between Regional Exam Centers, lack of senior oversight, and no dedicated medical division all contributed to inconsistent, unpredictable and often extensive processing timelines. While some mariners may have experienced same day service, the majority of mariners realized substantial delays. Clearly today’s agreed upon industry standard net processing time of 30 days (right now we average about 16 days) is a quantum leap forward in customer service. In past five years (2010-2015), the average monthly net processing time has only exceeded 30 days during one 7-month stretch (January – August 2014) as a result of the governmental lapse in appropriations and the 25% increase in Spring applications during 2014.  At its height, the highest net processing time was 40.5 days in May 2014.

Last year, you processed about 81,000 credentials for a mariner population of about 221,000. Is that (processing) number going to increase, decrease or remain static? Can you handle the workload going forward?
2014 is what NMC could term a “high-high” for credentialing applications. Each spring we experience a seasonal increase in applications, but 2014 coincided with the 5 year anniversary of NMC consolidation and initial issuance of the MMC completed in the 2008/2009 timeframe. This was further exacerbated by the January 1, 2014 implementation date of the STCW security endorsements. So the 81,000 credentials we processed in 2014 was an abnormal amount (25% increase from the annual average) given consolidation and a springtime surge. Over time, our expectation is that the 5 year surge number will normalize as that consolidation anniversary date gets further and further away.

The domestic mariner population has grown from about 193,000 in 2001 to today’s collection of 221,000 seafarers; up 12 percent in less than 14 years. Has your headcount in the credentialing division kept pace with demand?
The NMC constantly forecasts and responds to process needs at every stage. Right now, the NMC has the unique ability to ‘surge’ some personnel when demand calls for it. NMC is consistently looking at every billet to ensure the position is maximized for the mariner’s benefit. Obviously, we exist in a resource constrained environment and budget dollars are scarce for new personnel, but even so I believe the NMC is properly billeted and our processing times of approximately 16 days for an MMC and 8 days for a Medical Certificate support that assertion.

Give us a sense of your credentialing performance today. Last summer, it was an unsatisfactory 40 days, now that metric has shrunk to 16.5 days. What’s the ultimate, optimal goal and where do you stand today?
At present, our average Net Processing Time (NPT) for Merchant Mariner Credentials (MMCs) and Medical Certificates are 16 days and 8 days respectively. Our current goal for MMCs remains at 30 days NPT or less, while recently we have lowered the goal for Medical Certificates from 30 days NPT to 20 days NPT. Leveraging Information Technology (IT), the mariner credentialing program hopes to one day measure the processing of credentials and certificates in hours rather than days. We are continually researching ways we can incorporate affordable IT solutions and process improvements to enhance our program effectiveness and efficiency.

What’s the biggest issue on your plate today at NMC?
Leading the NMC down the path of continuous improvement – identifying opportunities where we can refine our processes, lean forward through the use of new and innovative technologies, and truly become more effective and efficient. While being mindful of the USCG’s challenging budget environment, find ways to improve our services to the maritime public and stakeholders, challenge my staff be remain innovative, and no matter how small, continue to make improvements when and wherever possible.

What accomplishment during your command / tenure at WV are you most proud of?
I am extremely proud of the unit’s accomplishments while faced with numerous unforeseen challenges of 2014. The NMC embodied my command philosophies of leadership, teamwork, commitment and professionalism to overcome a record number of applications, the implementation of a new regulation, the creation of the new medical certificate, amongst several other credentialing challenges. I’m also very proud of our efforts to assist military members throughout the credentialing process. Through the Military to Mariner efforts, I’m proud to say that we are actively assisting more military personnel (active, reserve & retired) earn and/or qualify for merchant mariner licenses than ever before. 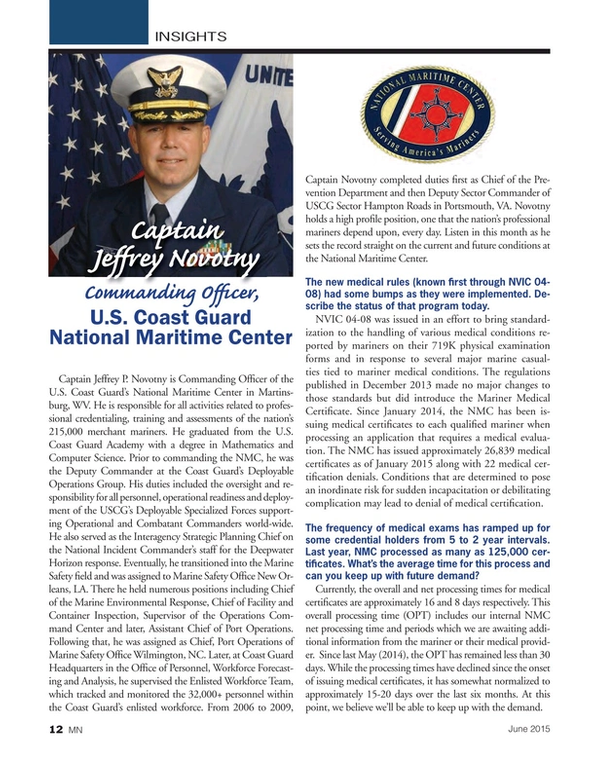