Selection of gear oil for marine thrusters or a stern tube lubricant for use with propeller shaft bearings is often based on analyzing price/performance characteristics of the lubricant and its availability. Now with the implementation of the 2013 Vessel General Permit, this analysis must be expanded to include environmentally acceptable lubricants (EALs) that meet the new EPA standards. To meet environmental requirements, EALs are blended from base oils other than mineral oil. They still meet the same lubricant objective – providing long-term equipment protection. That said, it is also worthwhile to focus on how the new EALs meet one particular criterion for analysis; namely, their ability to resist shearing under load.

Applications Requiring EALs
The 2013 Vessel General Permit requires that lubricants used in applications with an oil-to-sea interface meet specific requirements for biodegradability, toxicity and bioaccumulation. The permit allows for a phased transition to EALs based on product availability, dry-dock schedules, and approval of the lubricant from the original equipment manufacturer (OEM) of the application. OEMs are now in the process of testing and approving EALs for use in their equipment. All of the major stern tube system manufacturers have approved at least one EAL. Many of the thruster manufacturers have also approved EALs for new installations as well as equipment retrofitted with compatible seals.
In general, a complete performance analysis of an EAL gear oil or stern tube lubricant should include an assessment of thermal, oxidative, and hydrolytic stability to estimate the projected life of the oil under operating conditions. These results can be compared to the initial purchase price of the lubricant for a total cost of ownership value. Other measures include its ability to protect the equipment from wear, scuffing, pitting, and corrosion. A high performance lubricant will extend equipment service life and reduce unplanned downtime, therefore contributing to your bottom line profits.
Evaluation of lubricant viscosity is imperative to protect all the components in a system. The kinematic viscosity of oil is affected by a number of factors. One inherent physical property of a lubricant is its tendency to thicken in cooler temperatures and thin at higher temperatures. This change in viscosity as a function of temperature is called Viscosity Index, or VI. As a general rule, the higher the VI, the less the oil is affected by temperature change.
When formulating a lubricant, viscosity improvers (which are often polymer based) can be used to increase the VI. Viscosity modifiers are used in some EALs to push the viscosity of low viscosity biodegradable oil to a higher viscosity value. Using viscosity modifiers with a low viscosity base oil to manufacture a lubricant can be more cost effective than to use a high viscosity base stock. However, a lubricant containing viscosity improvers may not be as effective in high shear, high pressure, and extreme temperatures. In these conditions, the oil can exhibit a temporary loss of viscosity. When shearing continues or if the forces are high enough, the polymers can break down, eventually causing a permanent loss of viscosity.

Shear Stability Factors
One measure of a lubricant’s protective value is its ability to withstand shearing under pressure. Shear stability describes a lubricant’s ability to resist a decrease in viscosity due to exposure to mechanical loads. Maintaining the appropriate and OEM recommended viscosity is critically important to both protect the equipment and to extend the time between oil change intervals.
Lubricant thinning under stress is the result of the breakdown of viscosity modifiers. Under stress, viscosity modifiers can either align at the molecular level causing a temporary loss of viscosity – or they can break apart causing a permanent loss in viscosity. Either scenario reduces their effectiveness in service. Increasing viscosity through the use of high viscosity base stocks, without the use or only moderate use of viscosity modifiers, tend to have better shear stability.

Lubricant Effects on Stern Tube Bearings/Shaft & Thrusters
Stern tube systems and thrusters stress the lubricant due to high loads, speed of rotation, and heat. In a stern tube system, the weight of the propeller shaft and high thrust forces, combined with the speed of rotation and surface area create significant shear stress on the lubricant. As the lubricant protects the components and improves efficiency by reducing friction and generation, it also relies upon two main properties: viscosity and additives.
Determining proper viscosity is necessary to ensure a proper elastohydrodynamic (EHD) lubrication film. This film is a wedge of oil that builds up between two moving surfaces and provides separation. It is this separation that helps protect the surfaces from wear, pitting, and scuffing. EHD film thickness is a function of speed, pressure, surface condition, temperature, and viscosity.
A reduction in viscosity, either temporarily or permanently will reduce the lubricant’s ability to create a fluid film to separate the shaft from the bearing. Thrusters operate under extreme loads as they transfer power generated by the vessels engines, through the bevel gears of the z-drive and on to the propeller. When the correct viscosity is not maintained, an increase in micro-pitting and gear wear may occur. The lubricant selected to protect shafts, bearings, and gears must be able to withstand high shearing forces.
In practice, a good sampling program can be used to monitor the condition of the oil. Tracking the viscosity over time will detect loss of viscosity due to shearing. That’s why monitoring trending data is part of a successful oil analysis program. The condition of oil should always be checked against a representative baseline. A baseline can be established by directly sampling the sump soon after filling with fresh oil and after a short duration of operation. The frequency of sampling is typically established by the OEM or depending on the application and operating conditions. An adequate interval is typically based on the number of service hours or at set intervals to check for viscosity stability. If one of the tested parameters ever falls out of the OEM recommended range for the equipment, it should be replaced and a new baseline should be established.
While an oil analysis program will help accurately measure how the current oil is performing, there are numerous tests that a manufacturer can perform in the lab to characterize the oil performance to help the OEM or end user make an informed purchasing decision prior to filling the system/gearbox.
A preferred method is the standard test method CEC L-45-A-99, also known as the KRL Tapered Roller Bearing test. Used by OEMs and lubricant manufacturers, this test simulates lubricant performance under shear stress in actual gear and bearing applications. It is considered the most severe of the available shear stability tests and offers the best correlation to actual field performance. The CEC L-45-A-99 test simulates a high shear condition to accelerate the breakdown of oil viscosity. To accomplish this, tapered roller bearings are used because the large surface area of the roller exposes the oil to a high percentage of shear. The test bearings are run at 1,450 rpms for 20 or 100 hours under a load equal to 5,000 N, at 60° C. The results are calculated by measuring the percentage of viscosity change between the oil viscosity pretest and the oil viscosity post test. A small value indicates a high shear stability, while a high value indicates poor shear stability.

Results of Testing Shear Stability
Internal testing of various EALs using the test method CEC L-45-A-99 has produced a wide range of results among the sample lubricants. Synthetic ester based products that did not use viscosity modifiers produced the best results. Even after a short test duration of 100 hours, two of the samples with viscosity modifiers showed a minimum of 50% loss in viscosity. However the two oils that were formulated without viscosity improvers maintained a consistent viscosity.
Even a small drop in viscosity can drop the ISO viscosity grade down into the next VI category permanently. Running too light of an oil viscosity can reduce the lubricant’s ability to provide a sufficient oil film. If this occurs, lubricant protection is compromised, leading to higher probability of premature wear, scuffing, and pitting.

Conclusion
EALs are formulated to protect the environment. But there is no need to select an EAL that compromises the protection of thrusters or shaft bearings. Careful selection of EALs is necessary to prevent failures of bearings and gears. Protecting against shearing stresses is achieved by selecting EALs with a high VI. But lubricants that employ viscosity modifiers to raise VI can compromise shear stability. Selecting an EAL using a base oil with an inherently high VI – assisted by a logical sampling program – will ensure the high level of shear protection that meets today’s environmental and equipment requirements. 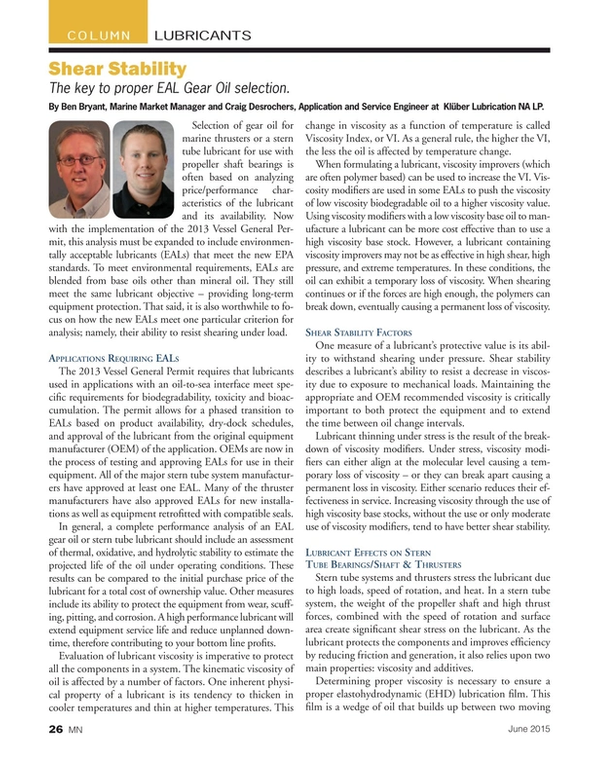