The month of June brings many things; among them sunshine, the beginning of summer and ultimately, a clearer picture of where industry is headed next. The June edition of MarineNews is also our Combat & Patrol Craft Annual, as well as being chock full of inland news. That means something for everyone, which jolts me to remind all of our readers that the second annual MN100 – our look at the top 100 market leaders for our workboat sector – is just around the corner in our August edition. Is your firm MN100 worthy? To be considered, and it costs nothing to apply, you must click on: http://mn100.maritimemagazine.com/ and populate the appropriate columns. I look forward to your entry.
Circling back to this edition, I can report that this year has so far been a mixed bag of sorts for the workboat sector. During a time of considerable turmoil in the oil markets, it is also true that the greater economy, especially on this side of the pond, has been generally steaming right along. One aspect of the marine sector that seems to be mirroring the latter trend is the building of combat and patrol craft. International security concerns have pushed overseas demand, either through foreign military sales (FMS) programs or other vehicles, and U.S. builders have benefited greatly from the trend. On this side of the pond, local municipalities and the federal government alike have developed a sizable appetite for well-built and multi-missioned platforms that can transcend many duty cycles. That story begins on page 36.
On the very same domestic waterways that require the protection afforded by patrol assets from North American builders, inland commerce has seen a robust year, with active building programs ongoing, hope for the final rule on the so-called subchapter M towboat rules, and a concerted (and somewhat successful) push to properly fund the infrastructure necessary to keep the commerce moving; full and down, at full speed. Quietly, under the Radar, inland newbuild tonnage continues to represent more than 90 percent of all domestic shipyard output, accounting for more than 1,000 vessels annually for the past five years. That’s a fact.
On the inland waterways, there is much to report. New technologies, new (pending) regulations, evolving emissions standards, and fresh business models have all come together at once in a confluence of pressure that promises to change the course of inland traffic forever. Whether that involves ‘geo-fencing,’ the tweaking of current laws, propping up America’s shortsea shipping program or discovering creative financing options for inland tonnage, we’ve got you covered in this edition.
More than halfway through the calendar year, workboat operators and the vast support network that keeps them afloat face unique challenges; inside the Beltway, locally on the rivers, and in the boardroom. And, the business decisions made today – see our exclusive look at the latest intermodal plans of Ingram, starting on page 42 – will shape what the river looks like tomorrow. Count on MarineNews, as always, to be there. 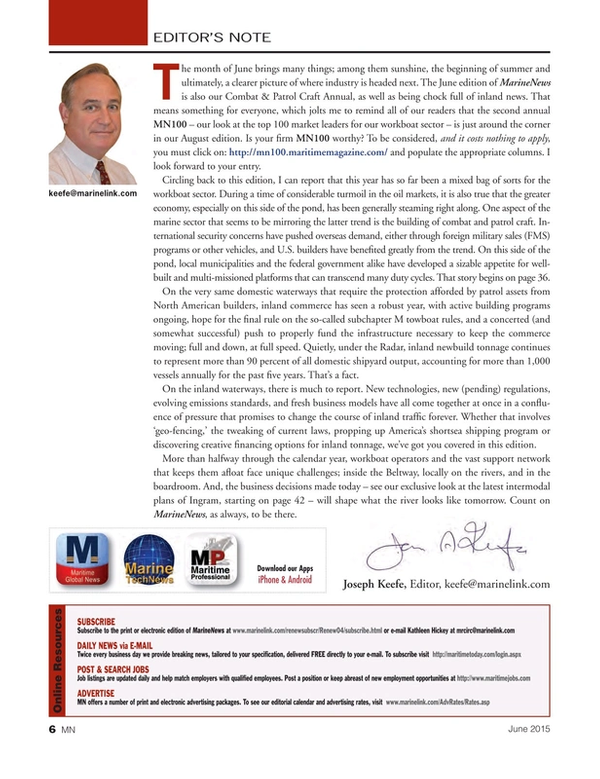