The ‘Greening’ of America’s Marine Highways

Ingram Barge Company sees two kinds of green in their newest venture on the inland rivers.

In late March, the Paducah-McCracken County Riverport Authority and Ingram Barge Company announced plans to assess the viability of Intermodal River Transportation, utilizing the largest flat-top crane in North America and Ingram’s towboats and barges. On March 27th, that plan came to life as the Paducah Riverport Authority’s 200-ton crane lifted 54 empty containers and stacked them neatly on an Ingram-owned barge.  An Ingram towboat then transported the container laden barge to the port of St. Louis and then back to Paducah for unloading. The highly successful trial run tested the logistics of moving the intermodal containers via barge in the nation’s heartland.

Ingram Barge Company, better known as a transporter of bulk products and commodities on the inland rivers, owns and operates 140 towboats and nearly 5,000 barges. The intermodal container move via barge now opens up a world of other opportunities and options – not only for Ingram, but also for shippers, environmental reform proponents and everyday users of the roadways that will see less traffic, if and when the fledgling enterprise takes flight.

rom the start, commencing the first voyage from Paducah made a lot of sense. Located at the confluence of the Tennessee and Ohio Rivers, the inland hub also boasts the right equipment to be a major container port serving this new market. With the U.S. Maritime Administration predicting that the nation will need to move an additional 14 billion tons of cargo by 2050 in order to accommodate population growth, it is clear that the future intermodal picture will need to include inland rivers as a key component. Ingram’s bold test run, which ended in April, certainly demonstrated the viability of the concept.

C-Suite Support
Chuck Arnold, Ingram’s Vice President of Business and Strategic Development, says the new business concept has firm support starting at the very top of the Ingram corporate structure. “Credit goes to our owner, Orrin Ingram. His son had done a lot of work conceptualizing the idea. And then it came to us, the business development guys. They said they would support us and we decided to run with it,” he said, continuing, “The genesis of this comes from looking at our highway systems and our rail system and our need to address growth going forward. We see ourselves becoming part of the intermodal network. And we’ve looked at the reports from the various DOT’s and we say that we can be a part of the solution.”

The test run distance, just 220 miles, was deliberately conducted at a measured pace. Ingram Business Analyst Andrew Luttrell explains, “We purposely took a slow trip, letting a lot of captains be on the barges, at the helm, and so forth. We wanted feedback from our fleeting areas. We didn’t take our best barge – we wanted to see how the equipment we have on hand handled the containers.” As it turned out, the equipment performed just fine.

At Paducah, the first container lift took some time. With a prevailing 20-25 mile per hour wind, the first swing took about 14-15 minutes, but by the time the operator got into a groove, that metric improved to just 5 or 6 minutes per lift (container). Looking ahead, loading one barge with 54 units might take less than 12 hours. As an added bonus, the bulk barges need no special reconfiguration or additional equipment to accommodate the containers.

Arnold explained further, “All we needed was a little bit of dunnage at the bottom of the barge. It was just amazing how well they fit. We went two high and two layers of nine by three – for a total of 54 units on one barge. It’s just a beauty to see that we can take what we have now and we’ll now have a lot more flexibility. We could take iron ore on one trip and containers on the next trip with the exact same equipment.”

Ingram didn’t set off down the river in a vacuum. Every aspect of the voyage was looked at and dissected. Draft – under the hull and/or above it (air draft) – wasn’t an issue. Admittedly, the containers moved during the test run were empty, but 54 fully laden containers only displace about 1,600 tons and since the height of loaded containers was well below the wheelhouse, air draft wasn’t an issue, either. “We had a lot of discussion about going three high, and if you look further into the future, there is economics for us in that stow, but safety really comes first. We talked to a couple captains who said they’d be a little bit concerned about visibility and if there was substantial wind, that could impact handling,” said Arnold, adding, “We’re just going to do our act ‘with a net’ at first, maybe we can get three high but safety is paramount and we want to make sure everyone is comfortable with two before we ever try three. And, if we ever get to three and decide that this involves safety risks, then we just won’t do it.”

Collaboration
Arnold insists, “We’re ready to go. We’re kind of a silent industry for transport, but this will give shippers an opportunity and for us, an opportunity to grow. As an industry, we think we could grow by as much as 50 percent without any impact on the environment or the recreational users.” Moreover, Arnold sees a shift in how to market the new service in a manner that appeals to everyone.

“We’ve heard forever, transport by barge. We’re trying to change that to ‘collaborating with other modes – intermodal transportation. So, when people talk intermodal, we want them to think rail, think truck and, yes, think truck. And we want folks to ask, ‘How are we going to put all of these assets together to put together the best intermodal plan?’ So often, when we say ‘Container on Barge,’ a lot of the old timers tend to look at their shoes. So, inwardly and outwardly, we refer to this as intermodal river transportation. The enthusiasm here is rampant. Now is the time to get more shippers interested and comfortable with it,” he said.

Selling the concept to new customers will involve education. Some potential shippers, says Luttrell, think that the (inland) system would freeze up for months out of the year, where that ’s really isolated to the upper Mississippi, north of St. Louis. He adds, “People hear that we ‘have constant floods and constant droughts.’ These things do happen, but we continue to move – even in the most severe drought of 2012 – we still moved product, just in lighter loads and we pulled it off.”

In theory, containers will move from point A to point B much faster via truck and/or rail. But, the disparity is actually much closer than that. The longer the distance involved, the better the economics and logistics will work. Chuck Arnold insists, “Certainly, we are the most cost efficient and environmentally friendly mode of transportation in this area. Short haul stuff? That’s still going to go on a truck. More than 200 miles, this is very, very viable. And, with a pilot and captain on board, we can run 24/7 so that makes up for a lot of time differential. And, at certain times – look at the example of crude oil on the rails, for example – there are peak times when you do a little bit better taking the demand off the system.” And, with the average speed of railcars in Chicago’s congested yards now averaging around 9 MPH, he just might be right.

Ingram’s ‘container on barge’ team says that it’s all about understanding the needs of the customer and asking, “What can we do to make the service more efficient?” Starting out, Ingram sees the service as a pure container service, but also something that could evolve into a mixed, flexible route that sees containers in one direction and bulk in the other. Luttrell told MarineNews, “Even if we only have 15 to 20 containers to start – a loss leader of sorts – we’re simply looking for a fair margin on our efforts. Without a doubt, this could be a ‘win-win-win’ for everyone: the environment, the barge operator and the shippers, too.” Ingram is already talking to several potential customers now that the test run has been completed.

Looking Ahead
Following their successful and routine beta run, Ingram finds itself looking out to the horizon for a good business fit. Luttrell told MarineNews in May, “For starters, Chicago is where a lot of empty containers are generated. That’s very viable – Chicago – Memphis, St. Louis. And, perhaps, a little bit further up on the Ohio River towards Cincinnati. And, obviously, New Orleans.”

Separately, on March 23, American Electric Power (AEP) announced that it was exploring strategic alternatives for its barge transportation subsidiary, AEP River Operations. AEP is one of the largest U.S. inland marine transportation companies providing transportation services for bulk commodities, coal and liquids. While it gave no details as to what might transpire next, it is also true that they have taken delivery of as many as 40 new tank barges in the recent past. As AEP transitions to a more diversified fleet that moves away from waning coal volumes, it also looks for new ways to make money on the river.

Ingram’s Arnold addressed coal in a similar fashion, saying, “It’s a component – a small part of the equation, sure. And, when we look at our order book, the best way to express our goal is that we want to have a diversified order book. Everything changes so fast – from grain to steel to coal to new commodities. We don’t want to be beholden to any one cargo. Natural gas liquids can be moved in containers. You have to take what they can give you and we looked at this and said, ‘Containers certainly need to be part of the pie here.’” Andrew Luttrell agrees. “We see a time where we can work together with all the systems in the intermodal picture, accommodating growth in the best way possible for the shipper.”

Ingram sees the future and the future includes dry cargo barges that just happen to fit containers nicely in good numbers. Sure, it makes for a ‘green footprint’ but Ingram also sees a different kind of green. There are success stories. The I-64 Express, for example, that runs between the inland port of Richmond, Virginia and Hampton Roads, has over time removed tens of thousands of trucks from the crowded I-64 corridor, while at the same time reviving the ‘container on barge’ concept. Championed by former U.S. Maritime Administrator and VA Transportation Secretary Sean Connaughton, that service is exactly what Ingram hopes to duplicate – and more. Separately and further to the north of Richmond, a ferry system running between Long Island, NY and Connecticut has for many years done the exact same thing.

It’s not about pitting one transport mode against another. There will always be a need for a truck to take that box to its final destination. In a perfect world, the truck driver is actually going to be able to go home at night and sleep in his own bed. And for an industry (trucking) which boasts among the highest turnover rates in their over-the-road employees of any business sector in the country, you would think that this sort of arrangement might hold some promise. Ingram Barge Company certainly isn’t the first to try this service on America’s inland waterways. But, sometimes, it isn’t about being first – it’s about collaboratively providing the right service, for the right reasons, in the right fashion, at the right time. And, when it is all said and done, that just might leave some competitors ‘green’ with envy. 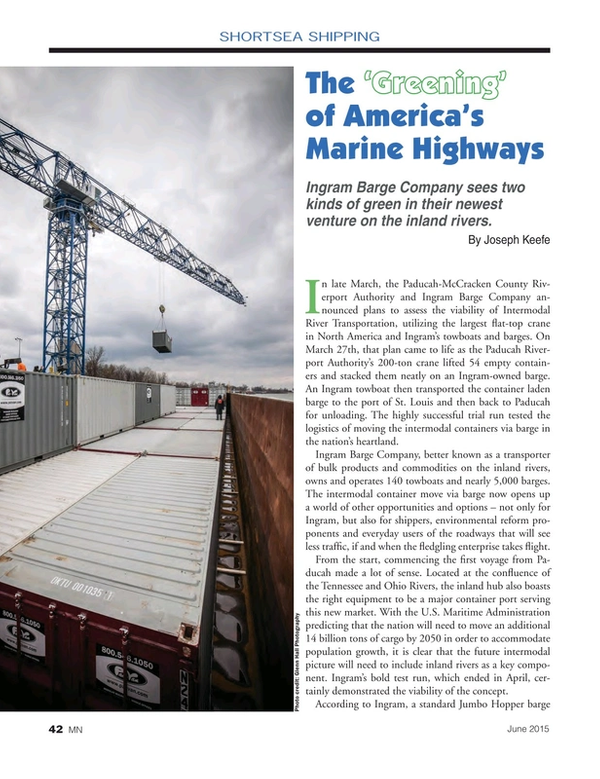