Can Employers Ask About Prescription Drug Use?

On the waterfront, it all depends.

It is well established that workplace safety and productivity can be compromised, not just by the use of illicit substances and alcohol, but also by the use of prescription drugs. Federal law, however, imposes limits on employer inquiries in this area both with respect to the affected job classifications and the scope of the inquiry.

Generally, an employer may not ask all employees what prescription medications they are taking because such an inquiry is not job-related and consistent with business necessity, according to Enforcement Guidance from the U.S. Equal Employment Opportunities Commission (EEOC). Nor may employers ask applicants about their lawful drug use if doing so is likely to reveal information about a disability. By contrast, however, after an offer has been extended but before employment has begun, “the employer may require a medical examination and make an offer of employment conditional on the results of such examination so long as (1) all employees are subject to such inquiry; (2) information obtained is maintained on separate forms and in separate files and treated as confidential; (3) the results of the examination are ‘only used in accordance with this subchapter.’ [42 U.S.C.] § 12112(d)(3).” Connolly v. First Personal Bank, 623 F. Supp. 2d 928, 931 (N.D. III 2008).
The Americans with Disabilities Act of 1990 (ADA) protects employees against being asked whether they are taking prescription drugs or medications, or about illnesses, mental conditions, or other current or past impairments. All current employees, not just those with disabilities, are shielded to some extent by the ADA’s requirement that employers’ limit disability-related inquiries and medical examinations to those that are “job-related and consistent with business necessity.” A disability-related inquiry is one that is likely to disclose information about a disability, including current or past prescription drug use or monitoring that use.
An inquiry is considered “job-related and consistent with business necessity” if the employer reasonably believes, based on objective evidence, that a medical condition will impair an employee’s ability to perform essential job functions or cause an employee to pose a direct threat. In limited circumstances, however, it is job-related and consistent with business necessity to require employees in positions affecting public safety to report when they are taking medication that may affect their ability to perform essential functions. Moreover, the ADA specifically provides that entities operating under the U.S. Department of Transportation may test employees in safety-sensitive positions for illegal use of drugs and remove from duty those who test positive. (§ 12101 et seq.) Such testing frequently discloses the unauthorized use of prescription drugs.
Thus, a maritime employer could require safety-sensitive personnel to report when they are taking medications that may affect their ability to perform essential job functions. Other medications, however, should be considered outside the scope of such an inquiry. Also, according to EEOC guidance, it would be unlawful to require administrative employees to report their medication use because any impaired ability or inability to perform essential job functions on their part would be unlikely to pose a direct threat.
Similarly, specific restrictions apply to the questions that employers may ask of prospective employees as well as those who have been offered a job. For instance, an employer may not deny employment to an individual based on the results of a lawful medical examination or inquiry unless it reveals an impairment that would preclude him or her from performing the essential functions of that job. Holiday v. City of Chattanooga., 206 F.3d 637 (6th Cir. 2000). Also, a drug test prior to a job offer may not be administered for the stated purpose of detecting illicit drug use when, in fact, employment decisions are impacted by the employer’s discovery of legitimate prescription drug use. Connolly, 623 F. Supp. 2d at 930.
Even without a disability, an individual subjected to an unlawful inquiry or medical examination can succeed with a claim under the ADA. Pennsylvania State Troopers Association v. Miller, 621 F. Supp. 2d 246, 252 (M.D. Pa. 2008). Similarly, the court in Griffin v. Steeltek, Inc., 160 F.3d 593-94 (10th Cir. 1998), found that a rejected applicant may seek damages under § 12112(d)(2)(A) if that rejection was based on information from an illegal pre-offer inquiry or medical examination, regardless of whether it reveals a disability.
Narrowly focused inquiries regarding employee prescription drug use may play a significant role in enhancing workplace safety. Nevertheless, maritime employers should give careful consideration to the nature of an employee’s position and the scope of substances to be addressed before proceeding with these inquiries.
The Author
Mark Meeker serves as Assistant General Counsel for American Maritime Safety, Inc., where he provides legal guidance to over 400 member companies regarding compliance with federal regulations impacting the maritime industry. He also conducts nationwide, on-site training classes for drug and alcohol testing as well as sexual harassment. Mark received his Juris Doctor from Pace Law School where he graduated cum laude and now serves as the President of the Pace Law School Alumni Association.
(As published in the September 2017 edition of Marine News) 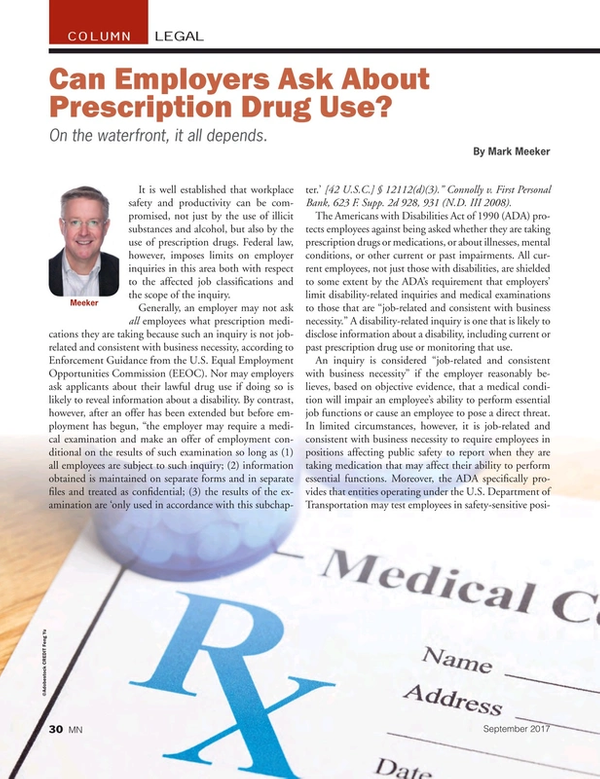 Read Can Employers Ask About Prescription Drug Use? in Pdf, Flash or Html5 edition of September 2017 Marine News