Will a rising tide in the offshore oil markets float all the boats? In the U.S. Gulf of Mexico, that remains to be seen.

Offshore services, exploration and production are on a roll. In early October, yet another business combination of big drillers was announced. In a sign of optimism, Ensco announced its plan for an all-stock acquisition of Rowan Offshore, worth around $2.4 billion. The new company will be domiciled in the United Kingdom, but will have a large presence in Houston. That  deal follows on Transocean’s plans to acquire of Cayman Islands based OceanRig for approximately $2.7 billion (in cash and shares) as announced in early September.

As the outlook for the drillers has brightened in the investors’ minds, the prospects for offshore service vessel providers have also improved. Early in the Summer, two U.S. companies (which had both come out of pre-packaged bankruptcies where previous debts can be restructured and converted into equity), announced that they would be tying the knot, with Tidewater International announcing its intention to acquire Gulfmark Offshore in an all-shares deal worth roughly $340 million (depending on share prices at the time of closing).

Consolidation: Buoyed by Offshore Optimism
As these deals evolve, companies have stressed their worldwide geographic span, leveraging high end, state-of-the-art equipment. And, ‘consolidation,’ as these companies merge, looms large. Benefits are both operational (more scope, cost synergies) and financial (bigger companies are more attractive to investors). Mr. Turner Holm, Managing Director of Equity and Credit Research at Clarksons Platou, wrote in a memo to investment clients highly supportive of the acquisition, “An ancillary benefit of this deal for both Tidewater and Gulfmark shareholders will be a larger and presumably more liquid equity currency. Combined, the companies will have a market cap of $1.25bn, by far the industry’s largest. The improved size and liquidity all else equal should contribute to better valuation in our view as a broader set of investors will be able to play an OSV recovery.”

More deals could be in the wind. Holm’s memo continued, “… this equity currency may eventually allow the new Tidewater to engage in further consolidation at cyclical-low values and opportunities for additional cost savings.”

Against the longer term backdrop of moving away from fossil fuels, in the medium term, measured in years, crude oil and natural gas demand are riding the cyclical demand curve upward. Prices have moved up sharply, bringing the optimism that underpins corporate acquisitions using shares. Economic growth and worries about possible supply dislocations and outages, linked to sanctions (against Iran), internal disruptions (Venezuela) and uncertainties about OPEC’s ability to pull back the production throttle, have brought crude oil prices up to levels in the $80/barrel region (basis Brent). Analysts from reputable mainstream institutions have suggested that $100/ barrel crude oil is not out of the question, if the disruption stars align.

This oil services optimism, fueling the international deals, can also be seen closer to home. Earlier this year, the U.S. Department of Energy’s Energy Information Administration (EIA) wrote, in its Energy Daily that: “U.S. crude oil production in the Federal Gulf of Mexico (GOM) increased slightly in 2017, reaching 1.65 million b/d, the highest annual level on record,” adding, “oil production in GOM is expected to continue increasing in 2018 and 2019, based on forecasts in the EIA’s latest Short-Term Energy Outlook (STEO). EIA expects the GOM to account for 16% of total U.S. crude oil production in each year.”

When the dust clears on TDW-GLF, which might be later in the year (the proxy process is ongoing) GLF holders would end up with 27% of the combined company, to be branded as Tidewater. The entity would own 245 vessels (making it the world’s largest), 173 of which were active in June. Of these, 38 were working in the Americas (including US GOM) in early Summer.

A look into the offshore future, taken from the joint TDW- GLF prospectus, filed in mid-October, projections made by Tidewater and Gulfmark, respectively, regarding their future operating prospects, tells a certain story:

In mid October, Tidewater and Gulfmark filed a joint definitive proxy statement and prospectus recommending the deal. A press release, issued by the two companies, said: “Both companies’ Boards of Directors continue to unanimously recommend that stockholders vote “FOR” the associated proposals to effect the business combination as presented in the joint definitive proxy statement and prospectus.” The companies will now begin sending proxies to shareholders, and they are anticipating a deal closing by mid November.

Financial Considerations
Lazard, the financial advisor to Tidewater, performed an analysis of 12 “comparables”, other listed OSV operators in various markets around the world, looking closely at various estimated financial ratios for 2019 and 2020, based on closing stock prices in early July. As revealed in the joint prospectus, they found the following for the group of comparable companies:

The paradox of exiting from Chapter 11 (especially the pre-packaged variety, where the details of converting old debts into new shares agreed in advance) is that company balance sheets are now un-levered, freeing up the capacity for new investments. Harvey Gulf International Marine (HGIM), the privately held U.S. offshore service provider (which had also been restructured in a bankruptcy proceeding- emerging in early June), offered an alternative suggestion to Gulfmark holders. In a non-binding unsolicited proposal, HGIM expressed a willingness to negotiate with GLF, and, if its offer was determined to be superior to that of TDW, take control through a “reverse merger” (where a private entity acquirer buys into an already listed entity). This proposal was turned down by Gulfmark’s Board.

Another listed company in the sector, Hornbeck Offshore Services (HOS) has stayed out of the M&A fray, at least so far. While it did not enter bankruptcy, it accomplished an important refinancing in June 2017, and its shares have steadily risen throughout 2018. In its mid July earnings call reporting Q2 results, the company’s Chief Financial Officer pointed to a better than anticipated Q2 result, informing call listeners that clouds had cleared temporarily “We were simply able to capitalize on a temporary swing in the supply demand equilibrium due to U.S. flag vessels leaving the Gulf of Mexico for other opportunities in this hemisphere, coupled with a typical seasonal uplift. This allowed us to briefly pushback rates for our HOSMAX vessels in the Gulf of Mexico during the second quarter.”

However, in the same call, Chairman, President and CEO Mr. Hornbeck took a very cautious tone about the market outlook in the Gulf of Mexico, telling investors, “Short-term fixtures for drilling units will continue to rule the day and should produce modest demand for vessel services – but the market will remain very much in a transitional stage for drillers, many of which would prefer to preserve their optionality by not committing their assets to long-term contracts before rig prices improve. That dynamic effects our short term acutely.”

A Rising Tide: will it float all the boats?
During the summer, optimism was returning, with rig utilization fueling demand for OSVs. Offshore brokers Seabreeze, quoting data from IHS-Petrodata, advised their clients that September 2018 rig utilization in the U.S. Gulf of Mexico (USGOM) stood at 47.2%, up from 35.1% a year earlier. Data provider Platts, measuring utilization slightly differently, pegged early October 2018 utilization of rigs in the USGOM at 50.8%.

Such figures do not tell the entire story. Like other maritime markets, offshore oil values high spec equipment, and sophisticated boats (such as Harvey’s LNG powered boats and heavy lifters, and Hornbeck’s DP2 and DP3 multi-purpose supply vessels ) earn premiums. On the HOS conference call, CEO Todd Hornbeck said: “In May, we closed acquisition of four high spec OSVs from Aries Marine Corporation and are satisfied with the manner – in the manner in which we have been able to quickly integrate these assets in former Aries Marine into our fleet … All four vessels are now operating in the spot market in the Gulf of Mexico and our other core markets. Overall, we are very pleased with the vessels and believe that they will be added to our high spec fleet of DP2 Jones Act vessels going forward.”

At the same time, an ongoing issue concerns the applicability of the Jones Act (which requires U.S. build/ crewing/ ownership) for boats operating in the U.S. Gulf of Mexico, with Todd Hornbeck telling investors on his call, “We believe foreign operators are unlikely to commit the MPSVs to this region given the legal challenges currently underway involving vessel activities, and their compliance under the Jones Act.” Hornbeck also offered, “Litigation on that front is continuing in the D.C. circuit court and we could see some common rulings issued late this year.”

In October 2017, a suit brought by two trade groups and a mariner, “RADTKE et al v. U.S. BUREAU OF CUSTOMS & BORDER PROTECTION et al” began working its way through the court system. In this case, the plaintiffs (including Shipbuilders Council of America and Offshore Marine Service Association) have asked the Court to overturn various Customs Border Protection rulings interpreting the Jones Act in a way that’s favored foreign vessel owners. For Jones Act OSV owners, favorable rulings could provide a lid on overall supply, pushing their utilization numbers up.

In the Long Run
Alternative energy sources are in the news, but fossil fuels will be around for a long time. Over the longer term, measured in decades, the Class Society DNV GL, in its 2018 Energy Transition Outlook, says that: “Oil demand will peak in the 2020s and natural gas will take over as the biggest energy source in 2026.” They added, “Existing fields will deplete at a faster rate than the decrease in oil demand. New oil fields will be required through to 2040.” With the improved price outlook throughout 2018, prospects have brightened for businesses that serve oil drillers and producers, including in the offshore segment of the marketplace.

A glimpse into the U.S. Gulf, through the Hornbeck Offshore Services lens, shows gradual improvement as 2018 rolls into the third quarter.

In U.S. markets, particularly the Gulf of Mexico, concerns remain that the sheer volume of laid up tonnage will continue to keep day rates low, especially when the prevailing mood of owners is to resist the calls to scrap the oldest of these support vessels, even though some analysts (VesselsValue and Alix Partners among them – see our BY THE NUMBERS analysis for this edition) say that many of these stacked vessels are out of class and the costs to bring them out will be prohibitive. Add to this the surprising ability of U.S.-based shale producers to dramatically reduce their costs to achieve profits even in a market where crude oil pricing dipped to $40 per barrel, and it can be seen that real challenges remain ahead for the offshore support sector.

Barry Parker, bdp1 Consulting Ltd provides strategic and tactical support, including analytics and communications, to businesses across the maritime spectrum. The company can be found online at www.conconnect.com 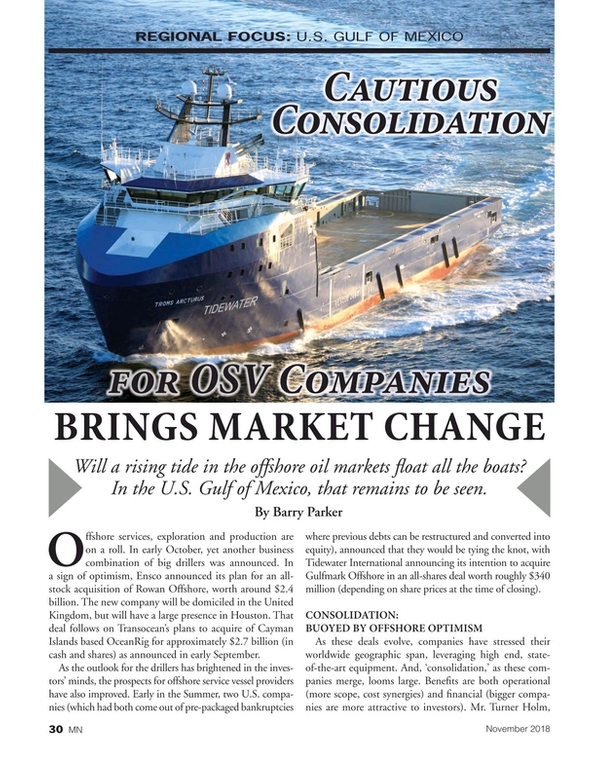