Humphree: Steady as She Goes

If you haven’t yet heard of Humphree – the Sweden-based supplier of vessel stabilization systems – then, more than likely, that’s about to change. The firm’s penetration into the North American commercial and leisure marine market has seen its equipment on several vessels, including high-profile deployments like the new Seastreak high-speed commuting ferry.

Founded in 2002 by a team of hydrodynamic and marine engineers, Humphree offers a range of interceptors and fin stabilizers for a wide range of vessels, from 30 to 350 feet. Volvo Penta acquired a controlling interest in the company in 2016, but Humphree operates as a separate company outside the Volvo Penta organization. Humphree’s headquarters and manufacturing plant are in Gothenburg, Sweden, but firm opened a facility in Virginia Beach, Virginia in 2012 to better serve its growing business in North America.

Fast and Steady Start
Sean Berrie, CEO of Humphree USA, told Marine News that the company’s recent projects in North America include the new Seastreak commuter ferry, a Gladding Hearn pilot launch for the Virginia Pilots and a catamaran excursion boat for Bar Harbor Whale Watching. Beyond this, Humphree interceptors are on the first US support vessel built by Blount Boats for the Block Island wind farm project and are specified on the US Navy PBX program with Metal Shark. The company has also made a significant number of retrofits on the New England commercial lobster boat fleet.
In the leisure boating segment, Berrie said that Humphree has won a loyal customer base among custom and semi-custom builders of large sportfishing yachts, such as Jarrett Bay, Spencer Yachts and others.

Interceptors and Active Ride Control
“Our core technology is our patented interceptors, which attach to the transom and use retractable vertical blades that create lift forces to counteract vessel motions,” said Berrie. “The interceptor blades respond very fast and with high precision, resulting in higher speeds through the water, improved acceleration and better visibility at the helm station. The blades produce little drag and produce a tremendous amount of lift force.”
Berrie noted that the Humphree interceptors are made of composite materials for optimum performance, corrosion resistance and light weight.

They are operated by a 24 VDC brushless electric motor and totally free of hydraulics. Humphree’s product line includes a wide variety of shapes and sizes, and the interceptors can also be custom shaped to fit exactly to the hull design. This year, the company is launching its new HLS Series for vessels over 170 feet.

Berrie explained that Humphree’s Active Ride Control provides full automatic damping of roll and pitch motions while also optimizing trim, list and heel angles. The system’s ride control unit uses an advanced digital controller with adaptive control algorithms and sensors, which include GPS, gyro and accelerometers to measure 3D rate of turn and accelerations. The coordinated turn control function automatically adjusts the heeling angle of the boat during turns to reduce the side forces, producing higher turning speeds and a tighter turning radius while giving the helm operator better visibility through the side windows. The automatic trim control function also improves fuel efficiency significantly, according to Berrie.

Commuting Ferry
Seastreak Commodore, placed into service this summer, is the biggest and fastest passenger vessel in the Seastreak fleet. The 150-foot catamaran caries up to 600 passengers on daily commuter runs between Sandy Hook, New Jersey, and the East 36th Street terminal in New York City with transit times of about 45 minutes. On weekends, it makes offshore trips to Martha’s Vineyard and Nantucket. The boat was designed by Incat Crowther and built at the Gulf Craft shipyard in Franklin, Louisiana.  Powered by four MTU Tier 3 diesels with waterjet drives, Seastreak Commodore has a top speed of 39 knots and normally cruises at 30+ knots. The catamaran is equipped with eight HA750 interceptors, four on each hull, with Active Ride Control.
“Speed, safety and stability were key design criteria for SeaStreak Commodore, which was built for long commuting routes across exposed waters as well as open-ocean transits,” said Brian Achille, director of engineering at Seastreak. “We have had good experience with the Humphree interceptors over the last five years on Seastreak Wall Street, and we are in the process of retrofitting them on other boats in our fleet, so we naturally turned to Humphree when specifying the stabilization platform for the new boat.”

“Our captains are very pleased with the performance of the Humphree interceptors, especially in rough seas, minimizing roll and pitch and reducing passenger seasickness.”

Separately, the four new 350-passenger vessels being built by Metal Shark for New York Ferries are also fitted with Humphree interceptors and Active Ride Control, according to Berrie.

“We are installing Humphree interceptors as standard fit on most of our new Chesapeake-class pilot boats in response to demand from customers,” said Peter Duclos, president of Gladding-Hearn. “They are far superior to traditional trim tabs, and the electric-powered interceptors do not require high-maintenance hydraulics.”

The Virginian Pilot boats operate every day around the clock, often in extreme weather and sea conditions, completing more than 7,000 ship boardings per year. The Humphree interceptors provide a smooth stable ride for passengers and crew even in the roughest seas and reduce fuel consumption, according to the pilot association. Berrie noted that Gladding-Hearn is also building new pilot boats for Alaska Pilots and Lake Charles Pilots, both with Humphree interceptors and Active Ride Control.

Whale Watching in Comfort
Acadia Explorer, a 98-foot catamaran commissioned by Bar Harbor Whale Watching this summer, is also using Humphree interceptors to give their passengers a smooth ride. Also designed by Incat Crowther and built by Gulf Craft, the boat is used as a passenger tender for visiting cruise ships and also for lighthouse and nature tours. The catamaran is equipped with two Humphree 800 and two H1250 interceptors with Active Ride Control.

“Passenger comfort is a number one priority for our new tour boat, which operates on the Maine coast where strong winds and currents are often encountered,” said Matt Ketchen, vessel operations manager. “The Humphree interceptor system reduces seasickness and discomfort regardless of sea and wind conditions. The automatic tilt, list and turn control functions also improve performance and reduce fuel consumption.”

Fin Stabilizers for All Speeds
In addition to interceptors, Humphree builds and sells a range of fin stabilizers that also use fast-acting brushless electric servo units running on 24VDC with no hydraulics. The fins provide stabilization at anchor as well as underway without running a genset. Humphree’s unique design allows the fins to rotate 180 degrees, preventing “anchor walk” and keeping the bow pointing into the wind and reducing the impact waves on the beam.

The fins’ carbon fiber construction make for less weight, and their flange mounts minimize hull damage in the case of grounding. Vessels up to 110 feet typically use dual fins, while larger vessels are fitted with quad fins.

Berrie noted that some vessels are being fitted with both interceptors and fins.  “This is an ideal combination, providing optimum stabilization across the entire speed spectrum from zero to 40+ knots,” he said. Steady as she goes – at any speed – for any size workboat. That’s Humphree’s mission, no matter what the application, sea state or type of hull. 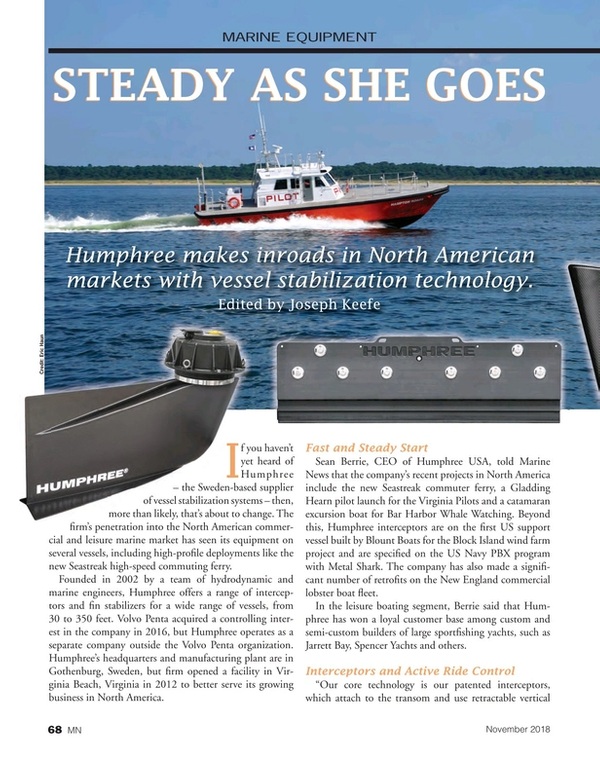 Read Humphree: Steady as She Goes in Pdf, Flash or Html5 edition of November 2018 Marine News