Among the most important considerations in outfitting any fast attack craft is the critical nature of crew-to-crew communications. With David Clark, MetalCraft has long had that box ‘checked.’

There are many obstacles facing boat manufacturers involved in the design and outfitting of patrol interceptor type vessels. This workboat segment is characterized by incessant demands for advanced design and new technology to accommodate the requirements of high performance and increasingly complex mission protocols. MetalCraft Marine is one such manufacturer that is meeting these challenges head on, evidenced by the company’s recent expansion of its successful 7-12 meter Interceptor line with the addition of the 10-meter, Fast-Attack Interceptor.

Chris Toller, Project Manager, Patrol and Military Crafts for MetalCraft Marine US, oversaw the metal construction and outfitting of the new 10M Interceptor, as well as the inshore and offshore trials. “MetalCraft set out to build the most mission-capable boat that is configurable to meet the needs of a vast array of end users, yet is cost-effective to build and has leading performance characteristics,” said Toller. “The 10M Fast-Attack Interceptor has met these objectives with a modular, actively configurable design.”

Virtually every feature of the boat’s design and equipment complement the over-arching objective of modular flexibility and fast response. The 10M Interceptor is capable of speeds up to 60 knots and features a state-of-the-art, SeaCross High Speed Navigation System. A deck-mounted rail system provides flexibility for Shockwave seating, benches, and chart tables. It’s equipped with a high-speed inflation/deflation wing collar system for rapid deployment from trailer to underway in minutes.

When it came to finding the ideal communications OEM, MetalCraft ultimately chose the David Clark Series 9100 Digital System, and for very good reason. For the firm’s Long Range Interceptor program, whose craft are subjected to some of the worst environmental conditions while underway or stored on the back of the National Security Cutter fleet, the most important benchmark turn out to be the intallation of an effective wireless communication system that could enable effective crew-to-crew comms. The focus of the boat is accessibility and freedom of movement – therefore it was paramount that crews were not limited by cables. Added benefits, said Toller, were the configuration customizations – a wealth of options to limit or enhance user experience.

Critical Crew Comms
Among the most important considerations in outfitting the 10M Interceptor craft is the critical nature of crew-to-crew communications. In keeping with MetalCraft’s objective of maximizing the versatility and flexibility of its Interceptor line, the company selected the Series 9100 Digital Communication System from David Clark Company. The Series 9100 is a mission-critical, ‘marinized’ digital communication system that offers unmatched ease of use, programmability, scalability and versatility, with a proven track record in the demanding patrol boat/interceptor market.

“Crew communication is paramount for effective missions and crew safety,” stated Toller. “This is a high speed boat, specifically designed to go faster and turn harder than the rest. The operator needs to know the crew is okay and secure, able to receive navigational and situational awareness input, and provide feedback with confidence the messages are being received.”

MetalCraft’s decision to incorporate the David Clark Digital Communication System on its Fast-Attack Interceptor was largely based on the system’s overall reliability, in particular as operated as a wireless solution. MetalCraft opted for a 6-position, all-wireless configuration on board its new 10M Interceptor, allowing crew members to stay online while moving untethered about the craft, or while on board another craft during interdiction. “Most important was an effective wireless communication system…the focus of the boat is accessibility and freedom of movement ─ therefore it was important that crews were not limited by cables,” said Toller.

While the 10M Fast-Attack Interceptor features an all wireless configuration for crew comms, MetalCraft was quick to realize the potential benefits of the system’s versatility and ease of scalability in providing such “future-proof” communication solutions for its customers, including the capability of accommodating both wired and wireless crew communication – all while wearing the same headset. “The [Digital Communication] system is very easy to expand, customize and add functionality – all centered on a common master control station. This makes it easy for even the end user to upgrade, or adapt to changing communication technology or upgraded mission profiles,” adds Toller.

David Clark Digital Communication headsets are available in a variety of models, including over-the-head and behind-the-head styles for use with military ballistic helmets. Headsets provide maximum comfort and durability while ensuring clear, crisp communication in the harshest conditions. All headsets feature Quick-Release connectors for switching from wired to wireless communication modes in seconds. Headsets also a feature a PTT button (redundant to the headset station PTT) that is conveniently located at the microphone bracket, making it easy to find in the most stressful situations while affording simultaneous boom/mic adjustment and transmit capability.

Repeat Customer, Critical Component
MetalCraft Marine has specialized in world-class, high-speed fire and crew boats for over 30 years. Well acquainted with David Clark Company’s more than 15-year track record in providing marine communication system solutions, and having used them on select fire and patrol boats it has manufactured in the past, the continuation of that relationship in this case was a ‘no-brainer.’

For its part, the Interceptor line has allowed MetalCraft to greatly expand its product range into the tactical and enforcement communities.  The USCG Long Range Interceptor, an 11 boat contract for high-speed interdiction, enforcement, and SAR missions, started the transition into this new market.  Since the LRI development, and the successful delivery of nineteen 9M Interceptors to two elite military groups, the line has grown rapidly in popularity and success. For much of that journey, David Clark Communications Systems have been on board as a valued and integral partner.

Chris Toller sums it up nicely when he says, “My experience with David Clark has been extremely positive. The [digital communication] system was easy to install, tech support was available as needed, and it has enhanced the demonstrations of our 10M Interceptor. MetalCraft would certainly consider installing David Clark systems on future boats.” 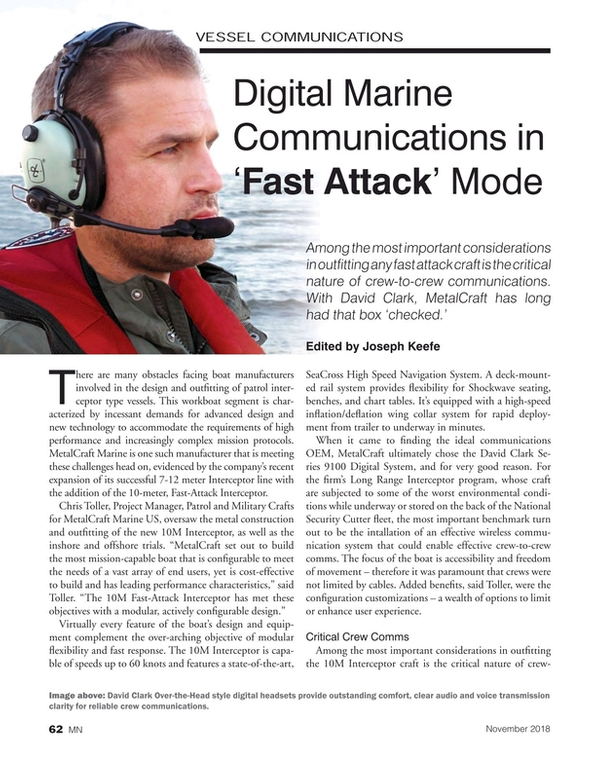