Designing for the Winds of Change

The advent of U.S. offshore wind also brings the need for the quality and quantity of built-for-purpose vessels needed to sustain its momentum.

As the long-awaited advent of offshore wind finally arrives on this side of the big pond, one question which continues to dominate the conversation is where (and when) the fit-for-purpose tonnage necessary for this great leap forward will come from. Just as important, stakeholders need to have confidence in the availability of proven vessel concepts, as they continue to explore opportunities and justify investment decisions in the growing sector.

First Out of the Gate
Rhode Island-based shipyard Blount Boats, in June, announced that it had signed a sublicense agreement with Marine Applied Physics Corp. (MAPC) of Baltimore, Md., for the building of crew transfer vessels (CTV) designed by UK builder South Boats. South Boats has designed and built approximately 30 percent of the wind farm crew transfer vessels operating on European windfarms, and Blount Boats has held the U.S. license for the firm’s designs since 2011.

In the years to come, as new offshore wind farms begin to sprout up in U.S. waters, a fleet of Jones Act crew transfer vessels will be required for servicing these projects. But Blount and South Boats aren’t alone anymore in this venue. In October, Chartwell Marine launched the Chartwell 24, a new CTV design that responds to the specific demands of offshore wind manufacturers, developers and operators. According to Chartwell Marine Managing Director Andy Page, the need to create confidence with familiar designs still leaves room for innovation, and substantial opportunities exist for those who can optimize vessels for US market conditions. In particular, he says, meeting EPA Tier 4 air quality requirements with bespoke propulsion options, hull and deck designs that stand up to larger Atlantic swells, and the ability to respond to unique development approaches with enhanced logistical support capacity, will be crucial advantages.

Page brings an impressive CV to the offshore wind party. With a BEng degree in Yacht and Power Craft Design, a Diploma in Ship Surveying and over 10 years’ experience in marine architecture, Page’s fledgling firm, a Naval Architectural consultancy business, started operations in January of this year. Previously, Page worked for a large high-speed vessel boat builder and repairer as a naval architect and general manager. Andy headed up the design team, which at its peak had 11 naval architects working on site. Page explains, “I was fortunate to be the designer of the Atlantic Pioneer which is the first offshore wind farm boat, missioned by Atlantic Wind Transfers. And so – with my previous company – we designed that boat. I was head designer at South Boats.”

The Chartwell 24
The Chartwell 24 design was developed following extensive collaboration and interface with industry stakeholders. Ideally proportioned for operation in offshore wind, the displacement versus installed power provides excellent transit performance, together with high bollard push and frictional holding force. The Chartwell 24 has an equal foredeck space to that of the largest available CTV on the market, and can operate at 29 knots while being EPA Tier 4/IMO Tier 3 compliant, either by direct diesel drive or by incorporating hybrid technology.

Beyond this, the vessel was designed with ergonomics and safety at the forefront of the design process. With the exception of mandatory class/flag sill heights the boat has no steps or trip hazards. Designated walkways, handrails and safety sliding rails are positioned specifically for the purpose of safe, repeatable, effective crew transfer. The interior is arranged to maximize comfort with class leading IMO HSC Code Annex 10 compliant reclining seating, local electrical power points and tablet connectivity with ultimate onboard WIFI. Built for purpose, Page says that the Chartwell 24 is a pioneer in its field and today is ready to support windfarm operations, here in U.S. waters, and around the globe.

The Chartwell 24 at a glance …

According to Page, the Atlantic Pioneer was fortunate that it didn’t have to sustain the new EPA/IMO tier constraints. But, he says, “If you were to build a repeat boat, it would no longer be compliant. So immediately that’s a design driver which we’ve had to consider. And one option within the 3 or 4 requirements is that any engine above 800 horsepower requires after treatment. So in order to increase safety and reliability, Chartwell, for the American market, has opted to propose four engines as opposed to two – smaller individual power units giving a total combined power similar to that of two larger engines but without requiring aftertreatment. And the tangible benefit is that you can actually operate at slower speeds using only one or two engines. It’s a far more efficient way of running, and as a result, you’re equally reducing your emissions output because you’re running at a smaller power unit which burns less fuel.”

Page’s design is engine OEM agnostic because many clients already have their own propulsion favorites. He adds, “The idea of the four engines is that you’re resulting in more redundancy, which from a wind farm owner’s point of view means that they’ve got high reliability because in the event of losing one engine you’ve still got three. The next tangible benefit is safety. You can power share and potentially operate more house loads with those power units. And from a sustainability point of view, the engines are more cost effective from a price point of view, individually.” Beyond this, he adds, the Chartwell 24 is ready for a hybrid configuration, should the client so desire.

Page points out other subtle changes and improvements. In a nutshell, this involves increased stability and improved safety. “Obviously, we have a different hull form, and we’ve learned a lot about the sea state off the East Coast. This involves different wave patterns than what we have in the North Sea; a longer wavelength, and generally, slightly larger swells. So, increased freeboard is something that I have added to our new design. This means that your wet deck is much higher, so therefore the chance of ‘wet deck slamming’ is much reduced.”

For the wind farm industry, a big challenge has been getting people from shore to where they’re going and getting them there fit enough to work once on site. Hence, the ride for the vessel is of critical importance. Page agrees, saying, “We’ve looked carefully at the seating arrangement, how we position the seats, the space between seats, the ability to recline seats and have been careful to ensure clear vision overboard. If they feel like they’ve enjoyed the experience, then they’re more likely to do a good day’s work. We’ve thought a lot about that and obviously I’m fortunate to have spent a lot of time designing these boats.” Offshore, trying to mitigate the chance of failure when workers transfer to the turbine is also quite important. Page refers to it as making the procedure “a repeatable, predictable experience.”

Blowin’ in the Wind
If Andy Page has his way, it might not be too long before Chartwell’s first hull is in the water. With a contract (in principle) from a UK-based operator, Page is looking to release a request for information to UK shipyard this month. On this side of the pond, he’s equally enthusiastic about getting started. He explained, “Certainly with respect to quality, U.S. yards are phenomenal. My experience was absolutely fantastic and I also worked with a couple of others; one in Florida and one in Maryland. The quality is undeniable.”

As Chartwell looks to compete in the wind farm business in the years ahead, the U.S. markets could well be one his best opportunities for growth. His previous success on this side on the pond should provide a measure of confidence as that situation develops. That’s because, while, for new entrants to U.S. offshore wind it may well be their ‘first rodeo,’ that won’t be case when it comes to Andy Page. 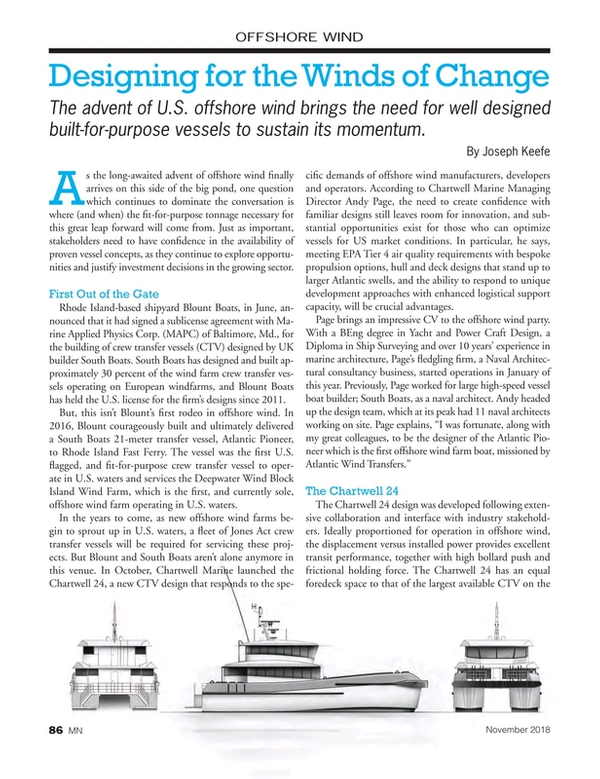 Read Designing for the Winds of Change in Pdf, Flash or Html5 edition of November 2018 Marine News