A primer on the quickly evolving topic of on board battery technology.

Energy storage itself is actually old news. Since the sails were taken down for good, merchant vessels have crossed the oceans using some kind of energy safely stored on board. Be it Coal, Diesel, Gasoline or Natural Gas, and regardless of energy type, safe storage onboard has been vital for safety and completion of the planned trip. On the other hand, active use of batteries in propulsion systems is relatively new. It started with smaller vessels, but expanded within a few years into medium and large vessels.

Improved Performance and Safety
One of the keys to this growth in both capacity and vessel types has been the new design that exceeds required thermal protection caused by a cell failure, typically called thermal runaway. Corvus, for example, has demonstrated in multiple tests that an injected failure on one battery cell does not spread to the adjacent healthy cells. Corvus has also introduced a contained battery solution that leads any potential gases out of the battery room, and into a safe area. These achievements, combined with active battery management systems have increased the confidence in battery technology significantly. The technology is now accepted as a viable and safe method to transfer energy onboard ships.

What's unique about batteries?
Batteries are the only major energy storage system that can instantly change from providing energy to absorbing excessive energy. The best way to describe this is to compare it to a coiled spring. You can compress it further, hence making it stronger, or you can release it to allow it to do a job for you. Simply explained, that's exactly what batteries can do for you. This feature is unique, and should be credited to power semiconductor technology developed by electrical companies. ABB was a pioneer in the marine industry, by launching the Onboard DC Grid in 2011.
Many other companies followed up with matching solutions quickly, and there are multiple integrators today actively using batteries in their solutions.

Taking Full Advantage of Batteries: count the ways
The ultimate goal for any new technology is to be able to perform the same job more efficient, less polluting, with reduced costs and improved safety. So how can we achieve this? Listed below are some of the features that today’s owner/operators appreciate when employing this technology:

In short, batteries represents multiple ways to reduce running hours dramatically for virtual any vessel type, ultimately minimizing expensive service intervals, saving fuel and myriad other jobs on engines. The concept has legs, and is in use right here in the United States. This year, All American Marine and Red and White Fleet of San Francisco announced the launch of the Enhydra, the newest member of the R&W passenger excursion vessel fleet. The 128-foot LOA aluminum monohull vessel with a 30-foot beam is the largest lithium-ion battery electric hybrid powered vessel in North America built under “USCG Subchapter K” certification.

The propulsion integrator or the 600-passenger vessel is BAE Systems, who supplied their HybriDrive propulsion system that includes a generator, propulsion power converter, house load power supply and control system. No doubt more of these kinds of vessels are on the way. It might even be a good fit for your operations.

Sveinung Odegard is sales manager for Corvus Energy in North America. He has participated in hybrid and all electric projects in Norway, and combines his work in Europe with living in Seattle, WA. Odegard also owns and operates a small business focusing on green marine technology for the North American market. 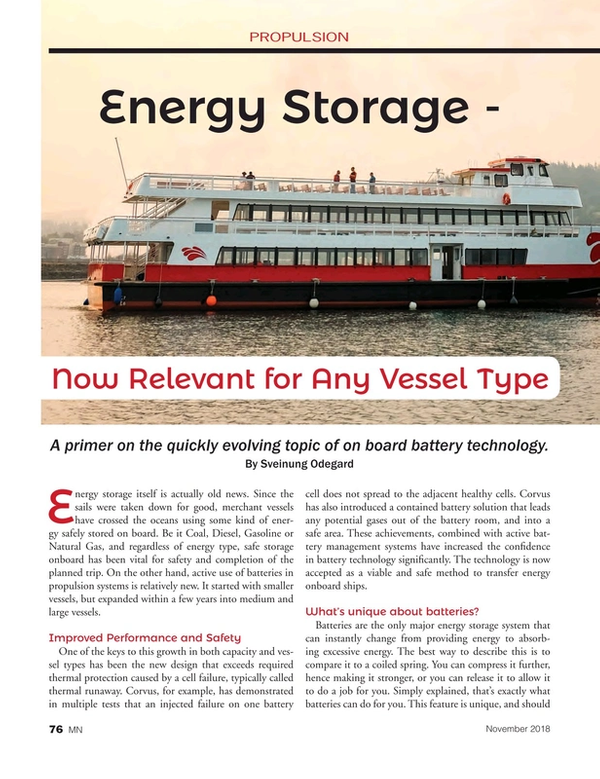