Regulatory reform is one of President Trump’s priority agenda items. Upon taking office, the President issued a number of Executive Orders focusing attention and demanding action on the myriad of regulations impacting American businesses.

Last May, the reform spotlight fell on maritime regulations when the White House Office of Management and Budget (OMB), published a Request for Information (RFI) on how the government should “prudently manage regulatory costs imposed on the maritime sector.” OMB, via its Office of Information and Regulatory Affairs (OIRA), is interested in change, in how existing regulations could be modified or even repealed to increase efficiency, reduce or eliminate unnecessary or unjustified regulatory burdens or simplify compliance “while continuing to meet statutory missions”

The effort also seeks to maintain the public benefits which were the reasons behind the regulations in the first place. Importantly, this was a ‘big picture’ effort. OMB’s May RFI noted that “although some agencies that regulate the maritime sector have previously sought regulatory reform ideas, this RFI seeks broader input on regulations across all agencies regulating the maritime sector.”

Originally, OMB set a July 16 deadline for comments. That was extended to August 30.  By that date 118 organizations and individuals responded. Within the RFI, OMB wrote that while all comments were welcome, OIRA staff was particularly interested in regulations in four core areas:

OMB received a lot of input. Importantly, though, some of those well-intentioned ideas may not advance if they don’t align with OMB’s core areas of interest. The following narrative presents just a small sample of what maritime stakeholders had to say, but these references exemplify the wide range of issues impacting maritime businesses, they are issues within OMB’s focus areas and, importantly, are chief concerns cited by many maritime companies and trade groups.

Passenger Vessel Spotlight
Hornblower Group is a passenger vessel operator headquartered in San Francisco. For Hornblower, manning requirements are top issues. Hornblower writes that passenger vessel manning requirements are “so complex that even more time (than OMB’s comment deadline) is needed for a comprehensive analysis to identify specifically which laws/regulations/policies need to be changed.”

As an example, Hornblower points out that the minimum crew required to operate vessels larger than 100 gross tons is double the minimum crew required for vessels less than 100 gross tons. Hornblower contends that tonnage is a singular measure, not fully, nor accurately, presenting the reality of operational issues; tonnage does not accurately reflect a vessel’s operational profile.

Separately, San Francisco-based Red and White Fleet focuses on vessel construction, suggesting that changes to MARAD’s 46 CFR Capital Construction Program rules, which R&W calls “outdated,” would yield big benefits. R&W’s maintains that existing MARAD rules inhibit new vessel construction, impacting maritime employment, American steel markets and the broader economy. “When the 46 CFR rules are updated,” R&W predicts, “there would be an increase in employment from coast to coast for all maritime operators and the many related suppliers and industries.”

Broad Based Concerns from Myriad Stakeholders
Crowley is a maritime transportation and logistics company based in Florida. Crowley lists five broad concerns, including:

The Great Lakes St. Lawrence Governors & Premiers (GLSLGP) is a US-Canadian regional maritime organization, obviously familiar with shared bodies of water, another OMB focus. Their comments focus on Great Lakes pilotage rates. GLSLGP writes that pilotage services are dominated by three private companies operating “without sufficient oversight and accountability” and that these costs are “a major impediment to current competitiveness and future growth.”

GLSLGP wants the US to undertake a “comprehensive review of the US Great Lakes pilotage system. The overall goal must be maintaining safety and reliability while improving transparency, accountability, and cost competitiveness.”  GLSLGP describes a “toxic environment between the Coast Guard, system users, and the pilotage associations.” Their concerns, not unlike those now playing out in places like Galveston and Houston, Texas, reflect similar struggles on all four of the nation’s maritime coastlines.

GLSLGP compares the current pilotage rate situation to a regulated monopoly, but absent the offsetting benefit of public utility commission oversight.  It suggests that the US review and analyze “the costs and benefits of eliminating the regulated monopoly system; deregulating the system; and introducing market forces and competition in service delivery.” GLSLGP notes that Canada has conducted a “comprehensive review of pilotage services.”  It notes that deregulation in air service and railroads has resulted in cost savings and economic benefits.

Comments from the A.P.Moller-Maersk Group offer insight into crisscrossing, overlapping agency demands, from Clean Air Act issues all the way to a suggestion to forgive student loans for U.S. Merchant Marine graduates who stay on the job for 10 years after graduating. “This will help with recruitment and retention,” M-M writes. Some other major M-M concerns include:

Regulatory Clarity? Anything but …
One important inter-agency regulatory move that will not advance as planned is the set of issues linked to EPA’s Vessel General Permit, or VGP3; the third iteration of the water pollution discharge permit for marine vessels. VGP is surely a priority for executive level directives about regulatory efficiency, undue regulatory burdens and simplifying compliance.

The current five-year vessel general permit expires December 18. EPA was supposed to present a new draft permit early in 2018 – didn’t happen, and it won’t happen because on October 11 EPA announced that it was kicking this can down the road when it announced that the Vessel General Permit “will not be reissued prior to its December 18, 2018 expiration date but will be administratively continued and remain in effect until a new permit is issued.” EPA writes that vessel owners/operators need to continue to comply with the terms and conditions of the “administratively continued” permit.  However, after December 18 even an “administratively continued” permit will be unavailable, but, of course, still required. But the Agency does say that it “stands ready to assist those applying for VGP,” which you have to have by December 18. How’s that for regulatory clarity? In the meantime, EPA’s new timetable for VGP3 is Spring 2019.

Over the Horizon
Since the close of the comment period at the end of August, OMB is likely reviewing all comments.  Unfortunately, OMB staff would not respond to questions about how long their review might take or, more importantly, their schedule to actually follow up with actionable proposals. Just as important is who will be in charge of this interagency regulatory house-cleaning; obviously, the higher the rank the more likely the chances for far-reaching reforms paying the biggest dividends.

OMB’s May 2018 request for comments stated that it “intends to communicate regulatory reform suggestions suggested by the public to the RRTFs (regulatory reform task forces) at the appropriate federal agencies for their consideration and to aid the agencies in the coordination of interagency streamlining of regulatory requirements.”  Hopefully that communication – and focused oversight – gets started sooner, not later. Stay tuned. 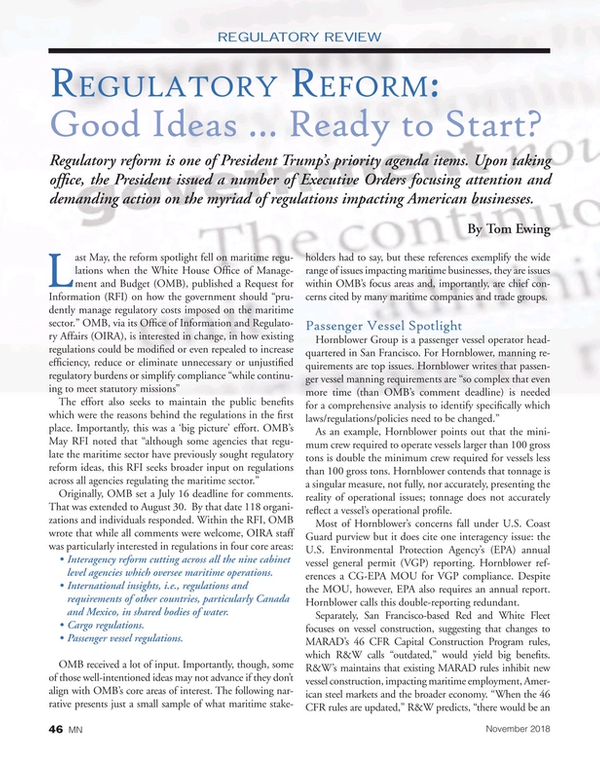