Global consulting firm AlixPartners, in a new paper entitled, “Too many ships, too few rigs: why recovery is still a distant dream for the OSV sector,” warns that companies counting on a quick return to stability in the OSV sector are in for a rude awakening.

The September report goes on to say that OSV companies continue to face pressure due to a radically changed oil industry and must take quick and decisive action in order to survive in what should be considered the ‘new normal.’

Separately, VesselsValue.com’s Head of Offshore, Charlie Hockless told MarineNews, “I would agree that there are murmurs of a potential market recovery brewing, however, there remains a considerable number of vessels that could theoretically be reactivated when rates recover, making these vessels a danger for the future market by elongating the downturn.”

Warning lights continue to flash bright for offshore supply vessel (OSV) operators, writes AlixPartners. Oil prices have rebounded to $70 to $75 per barrel, but the sector remains in serious trouble. Worldwide utilization is weak – with North America among the worst-performing regions. Charter rates are still running at or close to operating cost levels. A continued glut of vessels, caused by over-ordering during the boom in oil prices and easy credit, is hampering the industry. AlixPartners further warns that existing financial resources are likely not enough to sustain operators through the current environment, adding that 34 of 38 companies had Altman-Z scores of less than 1.8, indicating a high likelihood of bankruptcy in the next 12 months.

The two factors that drive revenue for OSV companies remain offshore rig utilization and day rates. The number of active offshore rigs is 33% lower than 2014 levels, declining to 474 in July 2018 from 706 in 2014. OSV day rates are 40% lower than in 2014. Moreover, geopolitical factors and U.S. oil infrastructure issues aside, abundant shale oil supplies in the near term and the impact of energy transition on oil demand in the medium-to-long term will likely serve as constraints on drilling a substantial number of new offshore wells.

Given these structural shifts in the oil industry, the AlixPartners report says that the global OSV market is currently oversupplied by about 1,150 vessels. About 900 vessels are 15 years or older which will have difficulty finding work and could be retired. But there are real factors preventing a reduction in the overall supply of vessels. The sector is fragmented, with the largest operators controlling 30% of the fleet and the remaining 70% controlled by 400 smaller operators with fleets of six or fewer vessels. Small operators have little incentive to retire any of their own fleets and are loathe to take action that would benefit the larger companies or the sector overall.

VV’s Hockless also weighs in, adding, “The nature of these laid up ships also blurs the real fleet size. A high proportion of these vessels are out of class and genuinely, worth less than what it would cost to get them back to operating condition. So why aren’t owners sending them to the scrap yard? This is often to do with age.”

AlixPartners advises that companies need to be more ambitious about their cost-cutting plans, by streamlining both operating and selling, general and administrative expenses – some of which could be driven by employing state-of-the-art technology. Consolidation will also likely play a role to address some of the supply overhang while realizing cost synergies and improving the sector’s value proposition. On the other hand, debt restructurings seem still off-limits for some creditors. Nevertheless, with a debt/EBITDA ratio of 23.9x, the sector is overleveraged, and most of that debt is unlikely to be repaid.

The difficult actions now required to become more cost-competitive and restructure balance sheets could create stronger world-class companies that can not only survive this crisis, but even thrive if the sector recovers. Today, the oversupply of vessels is the single biggest drag on the OSV sector. The market consensus for future offshore rig levels is currently running at about 550. Assuming a 4.5x OSV-to-rig ratio, this implies an overcapacity of about 1,150 vessels after factoring in current order book levels and demolition run rates. It would make sense to retire the roughly 900 vessels that are 15 years old or older, 500 of which are older than 25 years. But there are impediments preventing the OSV fleet from adjusting to sustainable levels. The most prominent impediment is the highly fragmented nature of the OSV sector.

The 10 largest operators in the sector control roughly 30% of the total fleet, while the remaining 70% or about 2,500 vessels, are in the hands of some 400 smaller operators, whose fleets tend to number six or fewer vessels. These smaller operators have little incentive to retire any of their own fleets and even less incentive to take collective action for the benefit of the collective sector. A general bias among operators against retiring vessels altogether sees most operators stacking the redundant elements of their fleets in the hopes that demand will rebound and most can be recalled to service.

At the same time, the scrapping option is not as economically attractive for offshore supply vessels as it would be for tankers or bulk carriers. The low steel content of offshore supply vessels leaves them with a scrap value of less than 1 to $2 million, with transport costs also weighing on that difficult decision. On the other hand, says VV’s Charlie Hock less, “Unfortunately for vessel owners, based on recent efficiencies made within the industry, they will have no choice but to scrap vessels on a large scale. Unsurprisingly OSV demand is lower than it was five years ago. What is surprising is that if we currently had the same level of drilling activity as we did five years ago today, the number of OSVs required for drilling support would be lower (than 5 years ago).”

Finally, says Hockless, “These leaner times have forced drillers to reduce costs, and they have done so with great success. So much so that in some areas, a USD 40/bbl oil price environment has been made profitable. If vessel owners accept scrapping losses now, the rewards/recovery will come sooner.” 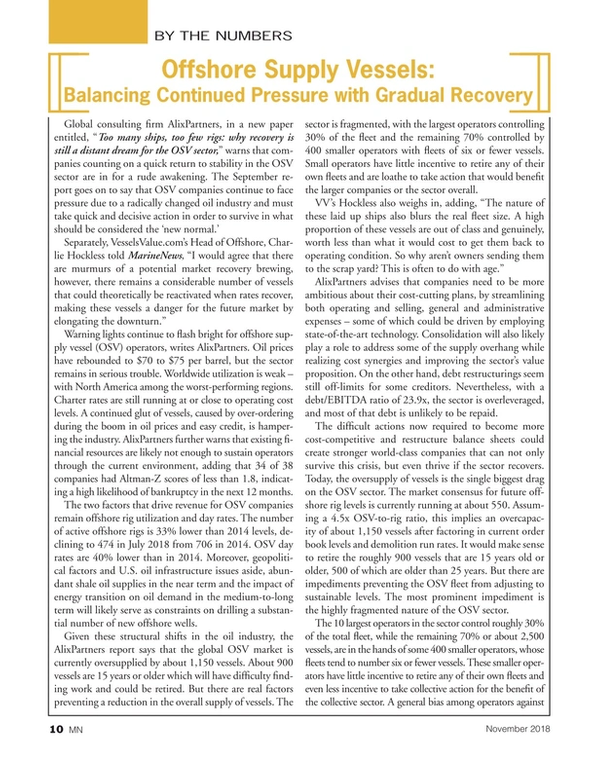