All Aboard with Fire Safety

The latest technology can detect the risk of an on board electrical fire – before it ignites. It’s not too late to incorporate this feature into your next workboat design.

Fire on board always poses a risk to life, although certain vessels such as passenger ships present a particular danger because they carry a large number of people, and tens of millions around the world use them as a method of transport annually. However, a fire on any type of vessel, including the vast number and array of workboats, is always serious and can have far reaching consequences.

Historically, it has been difficult to prevent ship fires and minimize their impact because of the specific nature of marine vessels. For example, constant vibration and movement, especially on workboats, tends to chafe and loosen electrical wires, while confined spaces and limited evacuation routes all exacerbate the difficulty in identifying and then tackling an on board blaze. A risk assessment report on ship fires produced by the Finnish Border Guard and Finnish Transport Safety Agency and for use in the Baltic Sea Maritime Incident Response Group (Baltic Sea MIRG) project concluded that it is very difficult to prevent ship fires and minimizing their consequences has always posed great challenges.

Despite strict regulations in place to ensure vessels comply with fire safety requirements such as those in The International Convention for the Safety of Life at Sea (SOLAS) Chapter II, the FSS Code, and Section A of the STCW Code – International regulations that aim to both prevent ship fires and minimize their consequences (proactive measures) – there are still a worrying number of fires on board each year.

Given the size and scale of the problem, a growing number of maritime operators are looking for ways of prevention using latest technological advancements in fire safety systems.

Causes of fire on board
One of the most common causes of fire on-board are those resulting from electrical faults due to loose connections, faulty appliances or overloaded sockets and distribution-boards. They all have one thing in common – the generation of excessive heat, resulting in the ignition of adjacent combustible materials and, ultimately, fire. This abnormal heating of connections and components can develop long before a fire even starts, and is the root cause of so many avoidable and potentially life threatening electrical fires on-board vessels.

If there was a way of detecting this build-up of heat before the point of ignition then many electrical fires could be avoided. This was the thinking behind the development of our WES Hotspot, a new technology that monitors electrical installations and equipment, alerting nominated personnel on-board to the risk of an electrical fire long before it starts. The technology has the ability to turn what would be an emergency situation into a simple maintenance task. The units can be easily fitted to new or existing vessels, where they are incorporated within sockets, consumer units and distribution-boards – the key risk areas in a typical electrical installation, especially those on-board where constant vibration and movement can chafe wiring and loosen connections. In these situations, the technology provides permanent monitoring of heat and activates as soon as abnormal temperatures (80ºC ± 5°C) are detected.  Once activated, the Single and Multi-Point Sensors generate a signal which can be connected to virtually any alarm system to provide those on board with instant notification.

A maintenance team can then be dispatched to the source of the alarm and carry out the necessary remedial work – long before it develops into a fire or trips out power supply. Prior to this kind of technology becoming available, the likelihood would be that the resistive heat would continue increasing well above 80°C until it resulted in combustion of nearby materials, or eventual tripping of the system after the fire had started. Once a fire begins, depending on its source, it has the potential to cut off both main and emergency electrical power supply, leaving the vessel adrift.

A step change from RCD’s
A report by DTI (Department of Trade & Industry) in the UK estimates that only 20% of all electrical fires can be prevented by the presence of a residual current device (RCD), which would still allow the vast majority (80%) of electrical fires on board workboats to occur. The source of ignition in electrical fires within low voltage installations is resistive heat. Circuit Breakers, RCD's and RCBO’s (residual-current circuit breaker with overcurrent protection or, in the United States, a GFCI breaker) are unable to detect heat generated at points of connection and therefore fail to respond to this major cause of fire until ignition has occurred.

RCDs are designed principally to avoid a person from being electrocuted and cannot detect the elevated temperatures generated by resistive heating. In order for an RCD to operate and isolate the supply (via a current imbalance) ignition would have already occurred.

Resistive heating of connections can generate heat in excess of 1000°C, well above the ignition point of many adjacent combustibles such as PVC cable insulation and switchgear components.

Summary
There is no doubt that there is a need for a pre-ignition safety device on-board that stops electrical fires before they start. Advances such as this provide an effective, easy to fit solution that actively prevents electrical fires – making it highly valued by workboat owners and operators. Being able to detect a fire before it starts means that it is more intuitive than existing protective devices such as MCBs and RCDs because it responds to the excessive heat caused by wiring faults and overloads.

Miniaturization of the technology, and an extended life from battery-powered devices, allow these devices to be fitted in a vast range of on-board consumer units, distribution-boards, sockets and electrical equipment, protecting the vessel and people from some of the hundreds of electrical fires that occur each year.

All of that said; it is clear that although RCDs and over-current devices do have an important role to play in mitigating the risk of an electrical fire, they are not able to address the majority (80%) of fault scenarios that may subsequently initiate fire ignition. Until now, there had not been a practical or straightforward way of detecting overheating of connections, yet these are a major cause of electrical fires. Latest smart technology is now capable of addressing the anomaly of electrical fires, meaning that routine installation of these relatively inexpensive devices could lead to a step change in on board fire safety.

This article first appeared in the JULY 2019 print edition of MarineNews Magazine. 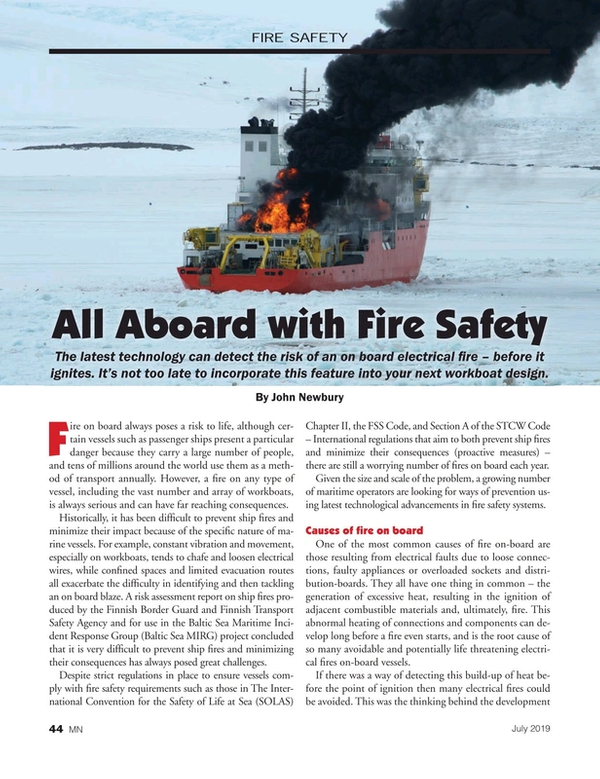 Read All Aboard with Fire Safety in Pdf, Flash or Html5 edition of July 2019 Marine News