Unappreciated, but heavily used by operators and closely regulated by the authorities, lubricants can also be a welcome part of your environmental and sustainability program. That’s right: lubricants.

When it comes to the ideal operating scenario on any marine platform, the challenge of balancing sustainability with maximum operational performance and arriving at a healthy bottom line has never been more difficult. That said; the arguably perfect solution involves using on board consumable product(s) that contribute to sustainability, operational, and energy efficiency goals. Does such a product even exist?

The answer may surprise you: it is lubricants. First, however, and to pursue these benefits; vessel operators, equipment manufacturers, naval architects, and classification societies will all need to shift how they assess the role of lubricating the mechanical elements used in the marine industry.

Traditionally, the role of lubricants has been viewed as a necessary component of mechanical systems while at the same time assuming the performance of the lubricant is similar across types and brands.

On the other hand, modern lubrication products and practices are driven by the science of tribology; a study of moving surfaces relative to one another and the friction, wear and (sometimes) ultimately, the damage that these machinations create. Utilizing elements of engineering, chemistry, and biology; the science of tribology leads to gains in sustainability through improvements in equipment design, longer equipment life span, increased energy efficiency, reductions in consumable material and direct and indirect improvements to the environment.

Sea Change: sustainability
When the EPA implemented the 2013 Vessel General Permit (VGP), the shipping industry necessarily increased its awareness of the impact on water quality from lubricants lost through routine operational discharges. Lubricants used in oil to sea interfaces and on equipment subject to emersion must now be non-toxic, biodegradable, and non-bioaccumulating to meet the EPA’s standard to qualify as an environmentally acceptable lubricant (EAL). In the six years since the permit requirement went into effect, at least 16 lubricant manufacturers have launched EAL portfolios of product and every major equipment manufacturer (OEM) of vessel propulsion systems has developed an EAL response. The EPA VGP reporting database for 2018 lists over 200,000 vessels with 95,000 EAL applications. Hence, EALs are now an important part of any vessel sustainability program.

To look beyond direct environmental benefits of lubricant choice brings the owner/operator into the realm of lubricant performance. Worldwide, consumers of energy utilize approximately 103 exajoules (1 EG = 1 quintillion joules) annually to simply overcome friction. Another 16 EJ is used to remanufacture worn parts. Combined, energy used to overcome tribological contact accounts for approximately 23% of total world energy production (Holmberg, K. & Erdemir, A. Friction [2017] 5: 263. https://doi.org/10.1007/s40544-017-0183-5). It is easy to see that the proper use of specialty lubricants combined with advances in industrial design will in the future play a major role in reducing energy consumption in the maritime industry.

Land-based mechanical systems with constant loads and operated in stable environments allow for accurate measuring of energy inputs and outputs. Consider the oil now used in high performance car engines and how it extends the life of the engine and improves performance. In manufacturing, Klüber Lubrication is working with customers to reduce energy consumption through detailed analysis of industrial gearbox arrays where in some cases a 15% reduction in energy consumption can be realized simply by choosing the correct lubricant.

Efficiency improvements on vessels are available, but they may be harder to document. Propulsion and cargo systems are influenced by changing environments, variable operating requirements, and operator preferences. Capturing actual energy savings from incremental change is difficult but theoretically available. For example, container ships carry hundreds of individual refrigerated containers each with its own compressor unit. The operational gain from replacing one compressor with an energy efficient unit running on synthetic compressor oil may be small, but if all the compressors used PAO based compressor oils, the savings in energy consumption and waste reduction would be sizable.

Klüber’s Role
An example from Klüber’s contribution to the marine industry is seen in an improved gear oil used in POD propulsion that extends the life of the oil, reduces damage to the components and reduces downtime of the vessel. Theoretically, customers are also reducing energy usage by up to 2%, but this is not easily measured due to the variability of the operations.

A second example from the Klüber portfolio is an improved ATB coupling grease. This is a ‘lost in use’ grease application with high utilization rates. Bench testing of the Klüber Lubrication product on tribological test rigs indicates a reduction in friction, increased life of the product and reduced damage to the components. In the field, consumption rates have been reduced by 20% to 50%. An additional benefit is the significant reduction in the noise generated by the bearings, leading to increased crew comfort.

A common term used to describe the impact on the environment from an individual or operation is the ecological footprint. By adding up the materials used, the waste generated, the energy consumed, the impact on air and water quality, and the impact on health and safety of humans, an assessment of the total environmental footprint can be estimated.

To take this concept one step further is to assess the environmental footprint that the person or operation contributes to the sustainability goals and actions of other individuals and organizations. At Klüber Lubrication, the following chart is used to conceptualize the firm’s role in the footprint/handprint of sustainability contributions. That footprint includes all the impacts from procurement of materials, production processes, and delivery to the consumer. Our “handprint” can be measured by the impact we have on helping customers achieve their sustainability goals.

A partial list of sustainability improvements affected from the choice and proper application of lubricants is shown below:

As marine professionals, you can advance sustainability goals through the application of tribology and lubricants. Vessel designers and architects can promote the role that lubricants play in achieving sustainability goals by incorporating energy saving and equipment design into their vessel concepts. Equipment manufacturers can test lubricants during the product development phase and provide guidance to end users on lubricant specifications. Operators can investigate lubricant options based on total costs of operation and reducing the “footprint” of the vessel.

Ultimately, marine organizations must recognize the value of lubricants in the overarching search for achieving operational efficiency, environmental and sustainability goals. Whatever the sustainability goals are for your organization, consider the impact lubrication has on total energy consumption and the life of your equipment. By designing modern lubrication practices and products into the operation you will contribute to an improved bottom line and a better world. 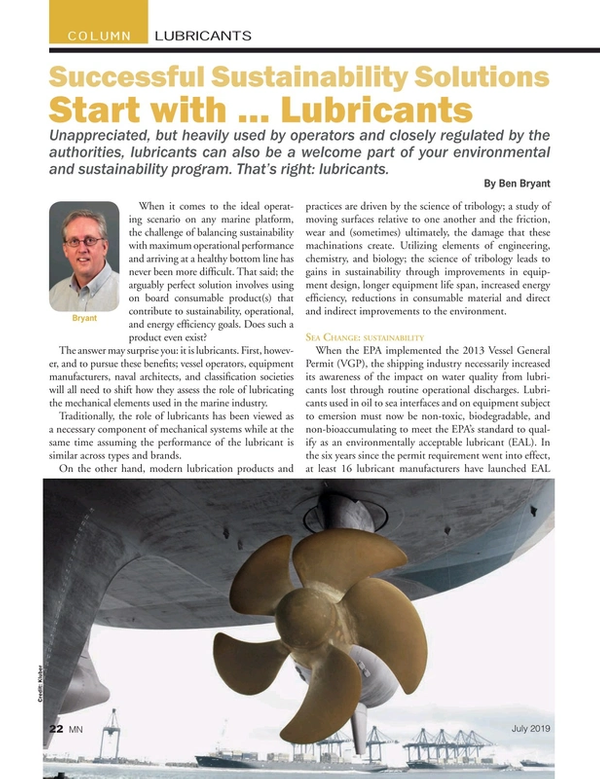