By Timothy Charters and Aaron Smith

In 1941, geologist Orval Lester Brace stated “it may be tentatively assumed that the Gulf of Mexico is a potential source of salt-dome oil. Whether or not it will be economically feasible to explore these waters for the domes that must exist is a question for the future to answer.”

The future hypothesized by Mr. Brace was not nearly as far off as it seemed. Less than six years after his proclamation, Kerr-McGee Oil Industries, along with Phillips Petroleum, Stanolind Oil and Gas Co, and Brown and Root, had constructed the first truly offshore drilling and production platform 10 miles off the coast of Morgan City, Louisiana. By 1949, 44 wells had been drilled into the Gulf of Mexico.

The founding of this industry was anything but simple. The routine supply chain issues associated with land-based drilling became logistical challenges for the offshore explorations of the 1940s and 1950s. Pilings, derricks, pipes, and drilling components had to be loaded on surplus World War II vessels, wooden shrimp boats, and other small craft. As did every ounce of drilling mud, water, and cement used during drilling operations, not to mention the men that worked on these platforms.

To meet these challenges, Alden “Doc” Laborde in 1955 constructed the first vessel purposely built to address these needs. This vessel, the Ebb Tide, was constructed by Laborde and his partners for $225,000. This vessel was larger and more powerful than the vessels that had been previously utilized. It was also better designed for the tasks with a large open deck which could carry oversized equipment. Because of these assets, three sister vessels were almost immediately built, as was the company Tidewater, one of the largest vessel operators on the planet.
The offshore drilling and vessel expertise that was developed in the Gulf of Mexico in the 1940s and 1950s was quickly exported around the planet. When the North Sea opened for offshore energy production in 1966, the first work was conducted by many of the men, machines, and companies that had cut their teeth in the Gulf of Mexico.

This innovative and pioneering spirit continues in the U.S. offshore oil and gas industry today. Many of the vessel-based, drilling, production, and servicing innovations made in our global industry come from the Gulf of Mexico. This success has caused our industry to remain primarily focused on oil and gas development, instead of applying our innovative nature to other offshore industries.

As a result, most of the advances made in offshore wind technology have been made abroad in Europe.

However, the U.S. is catching up. In 2016, the first U.S. offshore wind farm was constructed providing 30 megawatts (MW) of power to the U.S., enough to power 22,500 homes. Unlike Mr. Brace wondering what tomorrow will bring for offshore energy, our organizations know these 30 MW of wind power will be paltry by tomorrow’s standards.

The University of Delaware’s Special Initiative on Offshore Wind (SIOW) recently released a white paper estimating that the anticipated development of 18,600 MW of offshore wind power in seven Eastern states by 2030. Supplying this power to our nation will be 1,700 turbines, towers, and bases; 60 substations; almost 5,000 miles of cables; and more than $5 billion in maritime support, insurance, and project management. All told between now and 2030, the U.S. offshore wind industry will invest $70 billion in capital expenditures.

This emerging market has gotten the attention and interest of the U.S. offshore energy industries and many Gulf of Mexico companies are now committing resources and exploring offshore wind investments.

While our industries have an innovative history and nature, understanding a completely new industry is not always the easiest of tasks. The offshore wind market, development timelines, and regulatory seascape are all different.

This is where our organizations come in.

The National Ocean Industries Association (NOIA) was founded in 1972 and represents all facets of the domestic offshore energy and related industries. NOIA’s mission is to secure reliable access and a fair regulatory and economic environment for the companies that develop the nation’s valuable offshore energy resources in an environmentally responsible manner.

Similarly, the Offshore Marine Service Association (OMSA) is charged with proactively fostering, and promoting ideas that advance the common good and the interests of the U.S. offshore service vessel market and associated maritime industries.

Considering these complementary missions, it simply makes sense for NOIA and OMSA to come together to assist our members and our broader industry in understanding the emerging U.S. offshore wind market and the possibilities held within this market.

That is exactly what we are doing. On September 19, our organizations will host the NOIA-OMSA Offshore Wind Summit in New Orleans, Louisiana. This half-day event will feature three panels of industry experts.

In the first panel, Dr. Stephanie McClellan, the Co-Director of the SIOW will provide details on how the U.S. offshore wind market will be structured. Dr. McClellan wrote the above-referenced report which found that $70 billion in capital expenditures will be seen in this market between now and 2030 and she will use her presentation at the Offshore Wind Summit to discuss this report in greater detail; summarizing the supply chain required for offshore wind development.

Subsequently, the Summit will host a panel of offshore wind developers. These entities will provide even greater detail about the development timeline of an offshore wind project, detailing the usual timing and needs of these projects. Following this panel will be a panel of vessel operators who will discuss the challenges they have faced as they broadened their scope of work to include offshore wind operations.
Finally, the event – as any good event in New Orleans should – will conclude with a cocktail reception where participants will be able to further their knowledge about these industries and further explore the topics discussed during the presentations.

The NOIA-OMSA Offshore Wind Summit will be open to all who want to attend; those wishing to attend should check www.NOIA.org or www.offshoremarine.org in the coming weeks for registration information.

In 1941, Mr. Brace was correct in his assessment that markets are hard to predict. That still rings true today. That is why it makes sense that NOIA and OMSA, organizations with long histories of helping advance the offshore energy industry, are helping their members apply their expertise to the emerging U.S. offshore wind market. 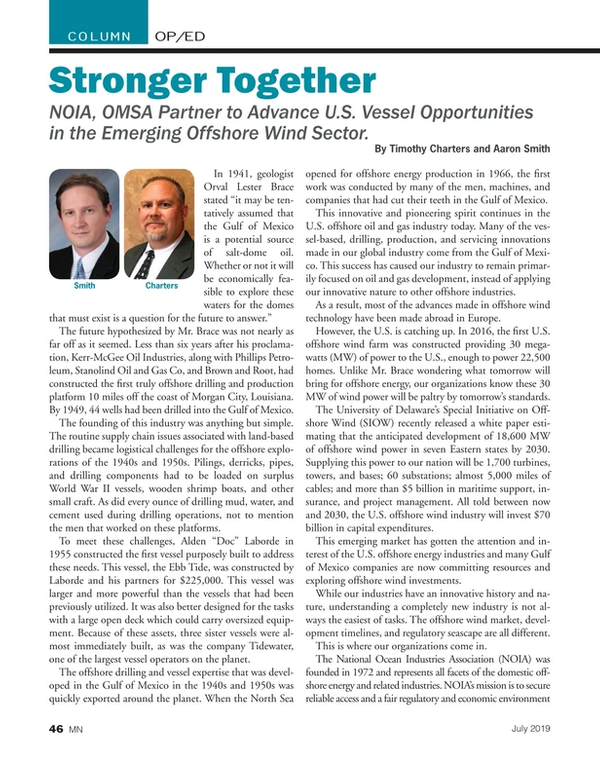