Maritime Simulation & Training: a partnership that pays off

It is truly no accident that Delgado Maritime & Industrial Training Center and Florida Marine Transport collaborate so closely.

Zero incidents, zero injuries and eliminating critical barge and equipment failures doesn’t just happen by osmosis. It’s a result of continual safety training that breeds operational awareness and confidence to anticipate a difficult situation on an inland waterway before it actually occurs.
With a high school education, Capt. Shelden Detrafford started out making $25/day in the 1960s. His training was provided by an experienced captain who took him under his wing and showed him the ropes, literally. Today, Detrafford is paying it forward – this time, on land via simulator training.

“Many pilots now make $1,000/day,” said Detrafford, who adds quickly, “For a young man starting out, if you can pass the qualifications, you can make a very good living.”

Solid Foundations with High Tech Support
With three interactive suites and another instructor in a fourth room demonstrating the law of superior tonnage on a rogue ship with the right of way, the simulator is a virtually complete, land-based training experience for every career level on a towboat. A captain can climb the hawsepipe with the confidence and expertise required to operate and navigate safely after simulator training, handling a bigger tow for bigger pay.

“Students think about all safety points, how to keep your cool in critical situation,” said Rick Schwab, senior director of maritime and industrial training for Delgado’s $7 million state-of-the-art center. “You’d rather crash in here than crash out there. The simulator shows how fast things can escalate in a domino effect.”

Students learn hands-on training in the simulator driving an inland towboat with an identical bridge setup, including all electronics and chart plotting systems. The control panels are interchangeable with an exact replica of wheelhouse, radio, radar, and engine room monitoring with two sets of rudder controls. Three bridge simulators interact with three students at a time. Bottom line?: critical emergency scenarios can be realistically simulated – without breaking the towboat.

FMT brings everyone to simulator training annually, all pilots, captains and mates, excluding deckhands. An ambitious deckhand could move through the ranks to the wheelhouse in less than 10 years. “You enter the simulator in the steerman program,” said Bobbie Sikes, FMT’s training center manager. “It all depends on how fast the individual wants to advance. You need four or five years on deck before entering the steerman program. It depends on how hard you hustle.”

“The simulator is more a refresher tool to use rules of the road while underway,” said Duncan, who normally pushes two chemical barges. “It gives you a chance without learning the hard way if you’re not ready for it. I can’t rave enough about Capt. Shelden and Capt. Jerry. Just racking their brains was beneficial. They make it enjoyable to go to class on your time off.”

Lessons Learned: Experience Conveyed
Training and experience taught Duncan to be in position in the right place at the right time with a big, heavy tow. “That is half the battle – knowing ahead of time if you’re in a bad spot,” said Duncan. “You might not want to be there next time. If you try to work against Mother Nature, you are fighting a losing battle, working against the wind and the current.”

Duncan trained in critical areas on the simulator, near Morgan City, LA, for instance, that are tricky when the water is running hard.

“The locks near Corpus Christi and Dauphin Island bridge near Mobile, we trained on those areas,” said Duncan. “It became progressively more difficult. There’s nothing like the real thing, but the simulator is close. You have to use your brain, think on your feet. I can run nearly anywhere except the upper Ohio River or Illinois River because I never got the experience yet. However, I’ve run the Mississippi River up to St. Louis, Tenn Tom and the Achafalaya.”

Duncan started with FMT as a green deckhand, moving through the ranks to tankerman to steerman and everything in-between with education on the simulator. He feels FMT instills safety in their wheelmen, providing awards if there are no recordable incidents.

“People tend to get on board a vessel with enough knowledge to get by, we freshen them up to prepare for situations they couldn’t get out of,” said Detrafford. “I don’t care how old you are, you learn something new every day. It is not a pass/fail deal; it is more ‘show me what you can do.’”

The simulator actually gives the sense of a vessel moving on the water and how it feels, rocking in open water, and even running aground if there’s insufficient water beneath your vessel. While simulating emergency procedures like loss of power, steering or a break away tow, nothing breeds confidence and experience like the simulator, where one is allowed to sharpen their skills.

“This is the most impressive simulator around with a premiere system for inland waterways,” said Detrafford, who marvels at the realistic graphics. “People don’t realize what goes into crossing rivers and canals, we are a stepchild in towboats.”

Delgado: cutting edge equipment equals inland excellence
With a dynamic positioning simulator planned for summer, Delgado’s simulators adapt for both conventional and Z-drive propulsion. Situations can be tailored for unique circumstances; from running a light boat in the IntraCoastal Canal to pushing 30 loaded barges southbound in the Mississippi River with a 6000HP towboat. Inland and offshore wheelhouse simulation is also offered at Delgado.

“We now video the simulation to pull and review as we make our full report,” said Detrafford. “We customize the program. Delgado operates the simulator and FMT does all classroom instruction.”

Detrafford said ships are easy, but a towboat is different dealing with current. It’s as large as a ship, but not the same propulsion and handling of a ship, especially in bad weather.

“Once in steerman program, we roll them through the simulator to see how advanced they are,” said Detrafford. “We provide a full report with evaluation on everyone in the simulator training to decide if this guy is someone we want to promote – or should we leave him where he is for now?”

The simulator provides students with the opportunity to learn how to flank bridges, letting the current bring a large tow around the bend.
“You don’t steer, you let the current do that for a 35-40 barge tow. You have to flank it, especially with low water. You can steer a small tow anytime, but with a large tow, you can’t.” For that reason, and others, Detrafford doesn’t recommend putting anyone in the wheelhouse right away.

“We have a true partnership with FMT,” said Schwab, who added, “We (Delgado) used an FMT facility after Katrina to continue to train FMT and other maritime companies while rebuilding our site that was destroyed. We customize training for FMT with Subchapter M. We work with the USCG to make sure they meet or exceed safety required for training. Everything we do now has an assessment. It is not about dulling the sword, but about sharpening the sword and building new levels of confidence to strengthen the student’s abilities.”

While three students interact in separate simulation suites, three other students drill in the classroom, testing on rules of the road and policies and procedures. During his career, Detrafford rode with captains and pilots who could not read or write, but his mentors were shallow draft professionals with tremendous responsibility, operationally aware at every moment.

“What’s going on around me?” said Detrafford. “Why is that guy doing that? We will not put you in a situation you can’t get out of with the right moves. A captain has a $6 million vessel and makes 50 decisions simultaneously, by himself. Barges are worth about $1 million each and with 50 barrels of gas; that has a value, too. The old saying, speed kills, is true. How many Wall Street bankers make 50 decisions instantly without consulting anyone else on $6 million? Probably none. But a towboat captain has to do that, instantly, on his own.”

For Captain Duncan, training keeps his skills sharp and emphasizes the best ways to avoid hazardous situations on the water. “It is a blessing to be part of FMT and I wouldn’t have it any other way,” said Duncan. Similarly, FMT and Delgado probably wouldn’t change a thing, either. Collaborating today to prevent tomorrow’s accidents: a worthy goal, yielding measurable improvements. 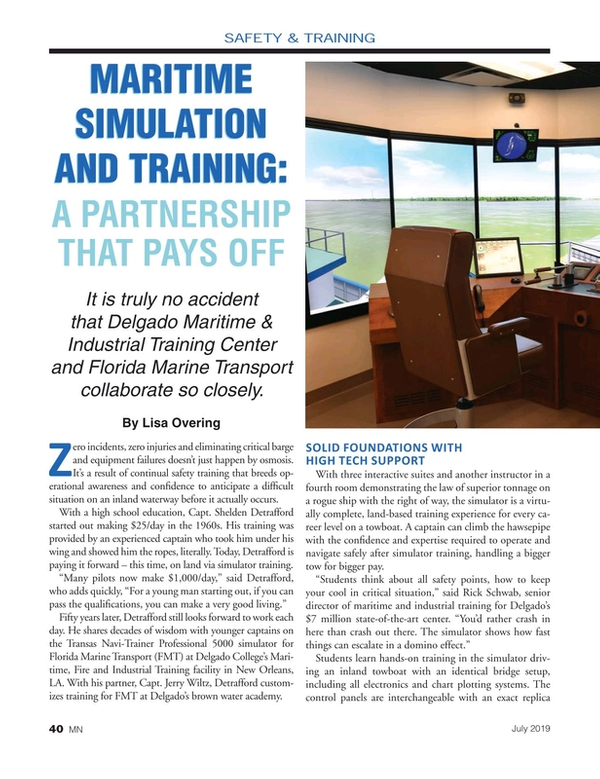 Read Maritime Simulation & Training: a partnership that pays off in Pdf, Flash or Html5 edition of July 2019 Marine News