MHI to Build for PGS

Mitsubishi Heavy Industries, Ltd. (MHI) received an order for two vessels capable of three-dimensional (3D) seismic data acquisition for sea bottom resource exploration from Petroleum Geo-Services ASA (PGS). The order for the two vessels, which was signed on April 25 in Tokyo, was placed upon exercise by PGS of the option right that was provided when two same type vessels were ordered to MHI in April 2011. The two newly ordered vessels are scheduled for delivery in the first and second half, respectively, of 2015. With this latest order, MHI will build a total of four vessels to support PGS’s highly efficient deep water natural prospecting services.
The vessels ordered are the “Ramform Titan-class,” the newest generation in the Ramform series featuring advanced 3D seismic data acquisition/analysis capability. The 104m vessel has a wide 70m breadth. For quiet operation, the vessel adopts diesel electric for the main propulsion system. The vessel is capable for receiving supply at sea to enable a long-term exploration over an expansive area. The Ramform vessel tows multiple streamer cables from the vessel’s stern, and in fact the Ramform Titan-class vessels ordered by PGS have a wider stern compared with existing vessels; this feature permits deployment of a greater number of streamer cables—up to 24 lines—enabling exploration of a wider area at one time. MHI is currently building two previously ordered Ramform vessels at its Nagasaki Shipyard & Machinery Works. 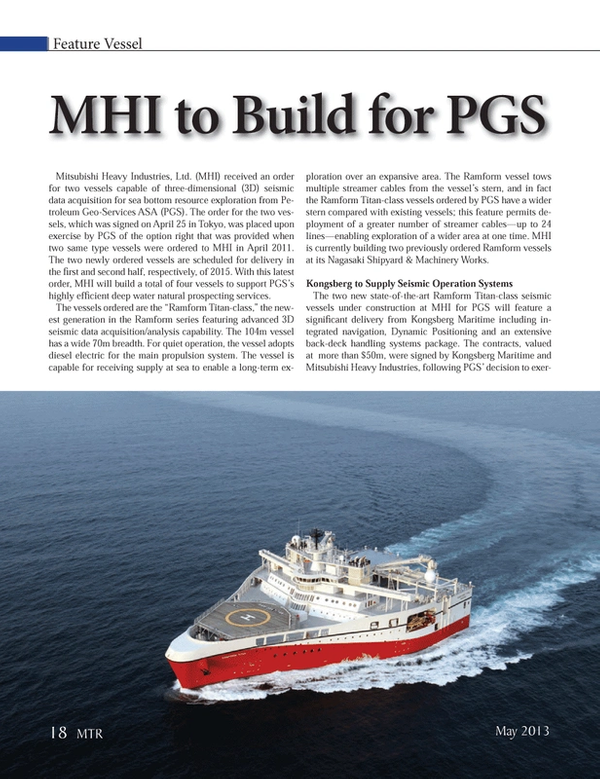 Read MHI to Build for PGS in Pdf, Flash or Html5 edition of May 2013 Marine Technology