Locked and Loaded for Hydrographic Missions

In recent years, the proliferation of unmanned surface vessels deployed for hydrographic missions has mushroomed as the collaborative effects of propulsion, software and sensor technologies has cumulatively made these vessels, large and small, more capable for a multitude of missions. In this edition, and on the heels of the Ocean Business exhibition last month in Southampton, Marine Technology Reporter examines recent developments.

The Hybrid
Liquid Robotics Debuts Wave Glider SV3
Known well in the industry for it’s innovative approach to gathering and disseminating information from the world’s waterways, Liquid Robotics  has further advanced its cause with the introduction last month of the Wave Glider SV3, what is touted by the developer as  the world’s first hybrid wave and solar propelled unmanned ocean robot.
According to Liquid Robotics, Wave Glider SV3 incorporates the latest advancements in energy harvesting technology, providing the ability to use both wave and solar energy for forward propulsion, innovations that will enable users to explore portions of the world’s oceans 24/7, in conditions that previously were too challenging or costly.
The ocean data solution proposed by Liquid Robotics’ new integrated platform is designed to provide ocean data collection and processing at the point of collection with real time delivery of information to shore.
Essentially, Wave Glider SV3 is envisioned by its developer to provide more information, more efficiently and cost-effectively.
“SV3 is a tremendous step forward in terms of what we can accomplish in the ocean and gives customers a competitive advantage to capture data in the most challenging ocean conditions,” said Bill Vass, CEO, Liquid Robotics. “By providing the ability to deploy Wave Gliders across most of the planet and deliver ocean data in a new and cost-effective way, we are enabling broad access to affordable ocean exploration.” The Wave Glider SV3 leverages the basic design principle of the Wave Glider SV2 platform, which was introduced in 2009, and has since traveled more than 300,000 nautical miles globally. 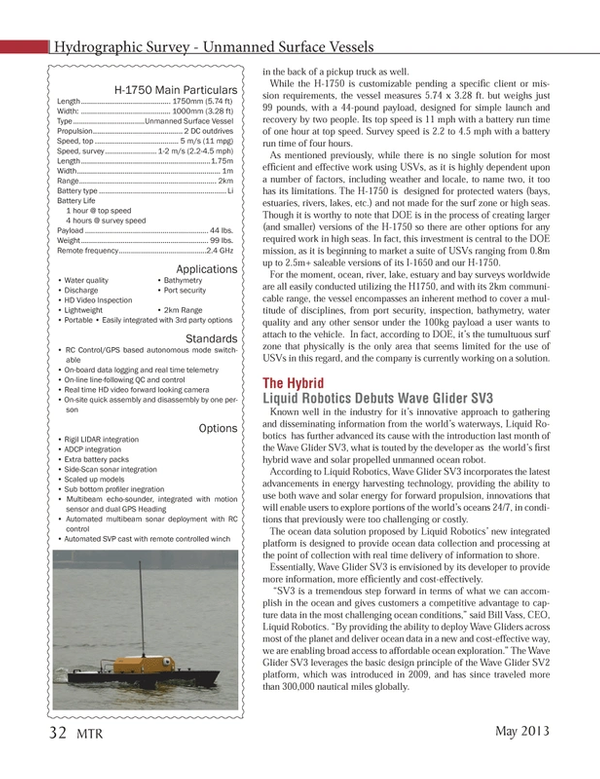