Teledyne TSS launched a new gyrocompass changeover system that protects navigation equipment against the danger of a sudden loss of heading input. The new system can be connected to up to four gyrocompasses and has been designed to automatically switch its throughput to that of another gyro should the principal one fail. The system can also be used to enable the manual changeover of gyro throughput if required, and the manufacturer claims it is currently the only system on the market that is capable of covering every failure situation.  The system consists of a rugged, bulkhead-mounted enclosure for the retransmission circuits and up to two separate display units that employ touch screen panels to provide the user interface. The availability of two displays enables rapid operator intervention at key locations on the vessel. The LED TFT panels show the condition and performance of all gyros in use and provide all of the operational controls in a clear format to permit immediate interpretation of the alarm and equipment status. The status and alarm interface is designed to comply with DNV rules for nautical safety which specify that no single failure shall result in a loss of heading information to receiving devices.  With 16 IEC 61162 serial data outputs, the new changeover system is particularly suitable for use with Teledyne TSS Meridian gyro compasses. It can also be used to undertake the changeover of any other makes of gyrocompass that use the same data output formats should they fail. It also has the option of enabling one channel to be reformatted if necessary.
www.teledyne-tss.com 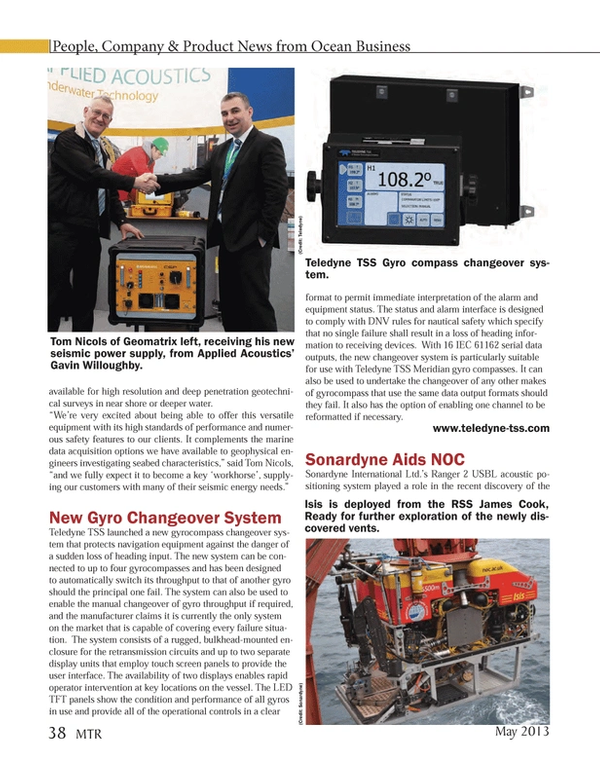