Bluefin Robotics on the Hunt for MH370

When Malaysian Airlines flight 370 disappeared on March 8, 2014 with 239 souls aboard, so began an aviation disaster and mystery. While a collaborative effort continues to hunt for clues in some of the world’s most remote, hostile and uncharted ocean environments, the subsea industry – and more specifically the AUV sector – has garnered international headlines, as Phoenix International, under contract to the U.S. Navy, has deployed its Bluefin 21 Artemis AUV in the search. Last month MTR caught up with Bluefin CEO David Kelly for his take on the search and the implications of the bright media light being shined on the AUV industry.

Before we talk about the current search, can you give us some insight on Bluefin, specifically how the company is still the same and different from the time you took the helm in 2008.

I think Bluefin has the same ‘go get it done attitude’ with a heightened focus on flexible products that meet the client’s needs for defense, commercial and oceanographic research markets. What’s different is, the market and the demand has matured and grown, and in step with that, Bluefin has grown. When I joined we were in a building in Cambridge with roughly 60 people in the company. Today, we are more than 200 employees including Seebyte personnel. We’ve sold vehicles around the globe including products to commercial offshore clients and 16 navies, so it is a much more mature organization with a broader product line and activities in more areas of the undersea robotics space.

The hunt for flight MH370 has brought a bright light on Bluefin, and in fact the entire AUV sector. Tell us about it.

Without a doubt this is the most intense media attention that Bluefin has received in its 15 plus year history. We’ve been involved with other important jobs including the hunt for the Earhart wreckage and several others. However, the mystery surrounding this flight has heightened the attention on the search.

Can you tell me about the vehicle operating in the hunt for the aircraft.

Let me give you a little background before I directly answer your question. The 21-inch diameter was the original AUV form factor of the early Odyssey platform that spun out of the Sea Grant lab in the early 90’s. It had an open propeller and control fins, a different pressure vessel approach and basic sensors. Today, the Bluefin vehicles don’t look anything like the Odyssey, The Bluefin-21 platform is our most mature platform, the one we built the most systems on, we have been refining the core technology for almost two decades.
The particular vehicle used in the Indian Ocean for the search is owned and operated by Phoenix International, Holdings, Inc. of Largo, Maryland. About three years ago, it was a Bluefin-owned asset we were using to upgrade the overall design to its next generation to address commercial survey operations. Back in 2012, Phoenix was looking for a system that could be deployed in just a few months. We sold them the asset with a plan to extend its depth rating from 1500 meters to 4500 meters. They used the Bluefin-21 in the search for Amelia Earhart’s plane, completed that job and returned the vehicle for the upgrades. Once it was back in their hands, they went out on a search and recovery job for the Navy. Last year, it returned again for additional acoustic communication upgrades. Bluefin and Phoenix had been in Hawaii with the system for extended deep testing for just a few weeks before the team got the call for the MH370 search. They mobilized to Australia almost immediately. It was kind of serendipitous we had just been working the vehicle at those depths just prior, and then it was mobilized.

Are there more vehicles like this operating in the field today?

Lets discuss the proliferation of AUVs in the offshore market. Specifically, where to you see the market today?

The first generation technology autonomous vehicles are built on is proven and trusted. The vehicles go out, collect data and come back. Overall the use of AUVs in the offshore oil and gas industry is still in its infancy. There is still some work to be done to integrate them as safe and accepted assets in active offshore oil and gas production fields. So we are working with industry partners to evaluate where advanced undersea robotics can be applied within the oil and gas sector, and the alternative energy industry. You could probably draw an analogy between the adoption and proliferation of workclass ROVs 20 years ago.

Getting back to the hunt for flight MH370, how did it come about that the Bluefin AUV was involved?

The AUV is owned by Phoenix International that has a contract with the U.S. Navy, Supervisor of Salvage. Bluefin learned about the possible use of the system the weekend before it was mobilized, when Phoenix called us and said that this might happen. So we started a discussion on how to provide a expanded set of spare parts suitable for high op tempo jobs in remote locations. If they had to do an extended deployment 1000 miles off of Australia, they wanted to know everything that they would need. We worked with them to identify the equipment that they had, and what it could be augmented with and when it was mobilized we got them what they needed.

As we noted at the outset, the media spotlight has indeed been bright on Bluefin. What are the pro’s?

The recent media coverage has given us the opportunity to offer the public a better understanding of what the subsea robotics industry can do in the ocean. The ocean is not that well explored, particularly because it is such a harsh environment to work in. There have been some great points made about the limitation of working at immense depths, communications and operational issues when deployed far from land and the limitations of the sensor technology.

And have there been any drawbacks?

While shining a light on our industry is great, we have to remember that there are 239 people missing. It is important to respect this is a tragedy, and we are cautious of being appropriate to the situation. People are waiting for answers so we feel an obligation to explain to them what our equipment can and can’t do. We don’t want to oversell our technology and beat our chests unnecessarily. We’re just proud and honored to be asked to help, and if our technology can help to find answers, that is great.

So (at press time) the vehicle has conducted multiple missions 1,000 miles from land in uncharted seas. What has been the feedback from Phoenix?

The Phoenix folks are experts in operating equipment subsea. They completed all of our training courses and we are confident in their ability to handle the Bluefin for the search effort. Since they were going to be in an unknown environment with limited bandwidth availability to the ship, we sent one of our marine operation engineers to augment the team. Bluefin vehicles have a lot of capability and their performance can be optimized for performance given the environment. It was more efficient for us to send someone to work with their team onsite instead of providing support from land in a different time zone.
It’s not uncommon for us to work with our customers, reviewing data back from a dive and providing feedback to adjust the systems for unique conditions and objectives. When your are 1000 miles off the coast of Australia the most efficient way to do that was to augment their team.

So can you summarize the support that Bluefin has provided?

The support we provided during the search effort is in line with what you would expect from a manufacturer with a global fleet of AUVs. The first thing was to provide some additional spare parts to support extended operations. Second, we provided advice on ways to operate the vehicle given the unknown bathymetry and conditions. Clearly this benefitted the search when the bathymetry turned out to be incorrect and deeper than the system’s 4500 meter depth rating. So the question came back from Phoenix: ‘can we extend the operating range?’
We analyzed the engineering data and we provided guidance to Phoenix and the Navy to the depth we thought that they could extend operations to at a reasonable risk and of being successful.
Essentially the question was “we have a vehicle out there, there are depths beyond its depth rating, can we press it?” We’ve gotten this same question on every vehicle we have ever built. We gave them guidance that they could run it down to 5000 meters, which they have done successfully.

While we realize the mission to find MH370 is still in the beginning and to date rather short in duration, but can you give us any “lessons learned” or walkaways at this point?

We are pleased with the performance of the vehicle to date; we have a single vehicle out there running back-to-back missions. There are some things that we see can be evolved given this type of mission, but overall I’m pretty happy with the production of that vehicle.

An looking at the bigger picture implications given the high profile coverage of the mission?

I think it is a positive in that it is broad exposure for not just this product but the technology to the general public. From an industry perspective, there has been a consistent response that this is not about our vehicle versus a different vendor’s vehicle, it’s about ‘this is the capability of the industry, understand the difficulties of working in this environment, trying to explain the challenges of these operations and the technology. In general it has been a positive to show what can be done. At the same time it shows to the public that this is going to take awhile, it is going to require patience and tenacity, it is going to look tedious to those on the outside not accustomed to these sorts of things.

And here is the toughest question of all: How would you grade the mass media’s coverage of your technology, your industry?

In general, the media coverage has been fair and balanced. The challenge is trying to explain the technology so that it is easy to digest for the media and the public. The biggest misconception was to not have them refer to these vehicles as drones. Current gen unmanned aerial vehicles fundamentally have an operator full time in the loop flying the vehicle, and if that link breaks, it is ‘bye bye plane.’ So the idea that the AUV is really autonomous — reporting its status, and maintaining its mission, tracking itself in the environment, turning sensors on and off, for the most part by itself, was the toughest concept to get reporters to understand as the difference between current gen air vehicles and current gen AUVs.

David P. Kelly is the President and CEO of Bluefin Robotics a wholly-owned subsidiary of Battelle.  He is responsible for the strategic direction and operational execution of the business.  David is a senior member of the IEEE, a member of ACM, and a registered professional engineer in the State of Texas. David holds a B.S. in Electrical Engineering from Worcester Polytechnic Institute, an M.S. in Computer Science from the University of Texas at Dallas, and an MBA from Southern Methodist University. 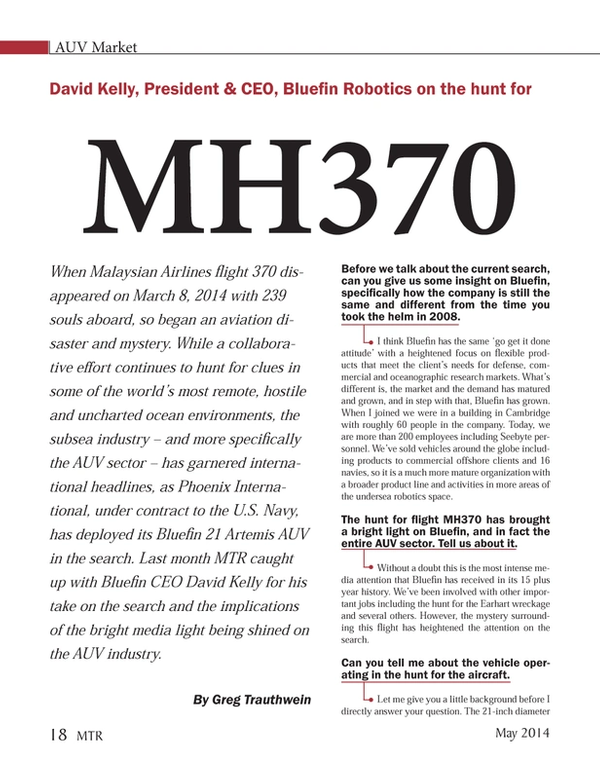 Read Bluefin Robotics on the Hunt for MH370 in Pdf, Flash or Html5 edition of May 2014 Marine Technology