Energy from the Ocean

As did many readers of this article, I grew up in a coastal community, with the relaxing sounds of waves rolling over the rocks and on the seashore helping me drift to sleep at night. While soothing, the oceans also generate enormous amounts energy, still largely untapped.
Used car and truck tires are plentiful and cheap, and they also have excellent water and mechanical resistance properties. Is there a way that recycled tires can be utilized in the conversion of wave energy to cheap electricity? I believe so.
As the world continues to burn fossil fuel, supplies will begin to run low.  At the same time, the supply of discarded tires grows higher, piles that present a significant fire risk and form a breeding  ground for mosquitos.  While there has been a movement to ween ourselves from fossil fuels, wind and thermal energy are still relatively costly sources.
In 2008, the author began to build a 1/20th scaled model of a floating platform to help harness wave energy.  The idea comes from the common paddle used to propel a boat forward.  If we could position a paddle (Figure 1) in the path of the wave and maintain it in that approximate position relative to the fluctuating water level; would it then be possible to have the wave move the paddle? A structure needed to be built to hold the paddle in place.
In the context of wave energy conversion, the concept of using recycled tires to produce electricity may be an innovative approach. Conditions for the structure (shown in Figure 2) and the overall project strive to meet the following requirements:

A cubical module measuring 20 cubic feet made of welded 18 inch diam. aluminum tubes and fitted with recycled tires (Figure 2). The tubes are individually sealed and the tires are filled with water resistant foam. An axle is suspended in the center of the cube and supported by stainless steel roller bearings.  A turbine is formed by welding four backward large blades to the axle called “reverse wave paddles.”  The paddles are moved by the waves going forward towards the shore and possibly during the return undercurrent wave cycle.  A large gear is rotated slowly around at the speed of the waves and the rotation is conveyed to a gearbox mounted on a platform above water level. The gearbox is connected to an electrical generator to produce electricity for use on the float and with large scale deployment, cables can carry electricity to the shore.
The configuration described above can be easily and inexpensively built.  The author maintains that the structure has minimal risk of sinking because each component is a floatation device.  It is designed to be reliable in the water because it is mostly synthetic rubber and aluminum construction. The combination of sealed aluminum tubes and water resistant foam filled used tires (Figure 3) is compatible with salt water, inexpensive, and has high mechanical resistance. The sealed tubes and foam filled tires together provide strong buoyancy force. Four stabilizer water tanks are mounted on four corners of the float to adjust the position of the rotating blades relative to the water level.  When heavy weights are added water can be released from the tanks to return float to desired position.  Alternating modules are used to direct and increase wave energy into the active modules.  Modules are connected together via stainless steel short chains, leaving some flexibility to float relative to each other.  When several modules are connected they form a continuous multifunctional platform.  Wind turbines and other structures can be mounted on the upper deck of the platform (Figure 4).
For test purposes, nine units should be deployed to evaluate all parameters of the modules including functionality, reliability, efficiency, anchoring, cost, maintenance, survivability, effect on sea life and other factors. Because material costs are competitive, construction of nearly identical units can provide economy of scale, and because of the versatility and the flexibility of the platform; cost of electricity from wave and wind energy can be extremely competitive.
Wind turbines can be installed on the top deck, as ocean winds are a valuable and reliable source of clean energy.  Offshore coastal areas with high wind potential may be able to utilize the large surface areas of the platform to separate the wind storms form the warm ocean surface water on which they feed.
The ideal location is a function of several factors:
•    Close to islands or near-shore communities which depend on fossil fuel for generating electricity
•    Away from areas normally used for recreation
•    Close to areas with established electrical transmission lines
•    At a distance from shore where surface waves and undercurrent could be utilized.
•    In locations not frequently used for fishing, crabbing and other related activities
•    In areas with minimal interference with marine traffic. 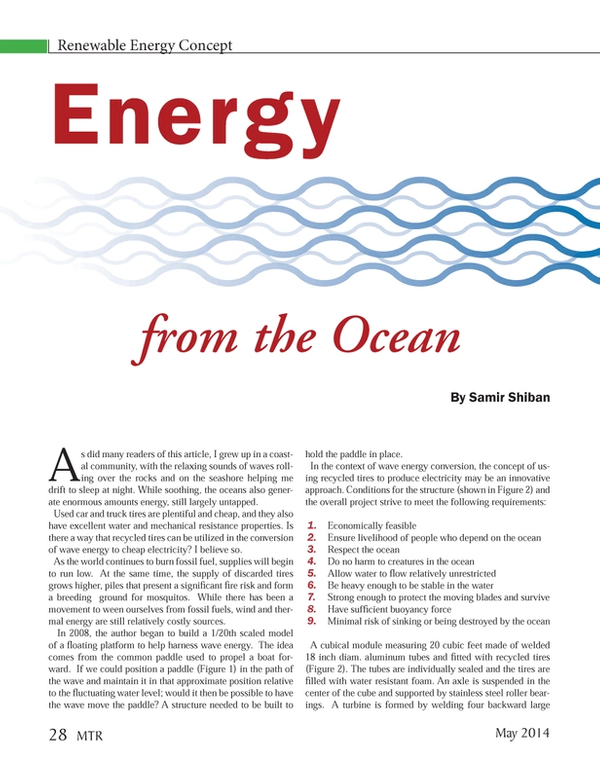 Read Energy from the Ocean in Pdf, Flash or Html5 edition of May 2014 Marine Technology