Operations to install the first of the 19 sponsons to be positioned for the refloating of the Concordia wreck concluded on Monday, April 28 after 2.5 days of work, according to the Concordia wreck removal project informative website. The sponson S13, noted as the biggest in weight and size, is now positioned on the starboard side at about 11m in depth from the artificial seabed on which the Concordia rests since the parbuckling completed in September.
The sponson reached Giglio Island via barge and was unloaded and placed into the water through rotating crane of pontoon Conquest.
It was then completely filled with water so that it could be submerged and connected through a sophisticated automatic system of the chains that keep it anchored to the wreck.
Technicians next partially emptied the sponson to make it lighter and give it the buoyancy needed to keep the chains tensioned.
Before refloating, another 14 sponsons need to be positioned on the starboard side and four on the port side of the Concordia.
Sponsons will be completely emptied to provide the buoyancy needed to refloat the Concordia and prepare it for transportation.
www.theparbucklingproject.com 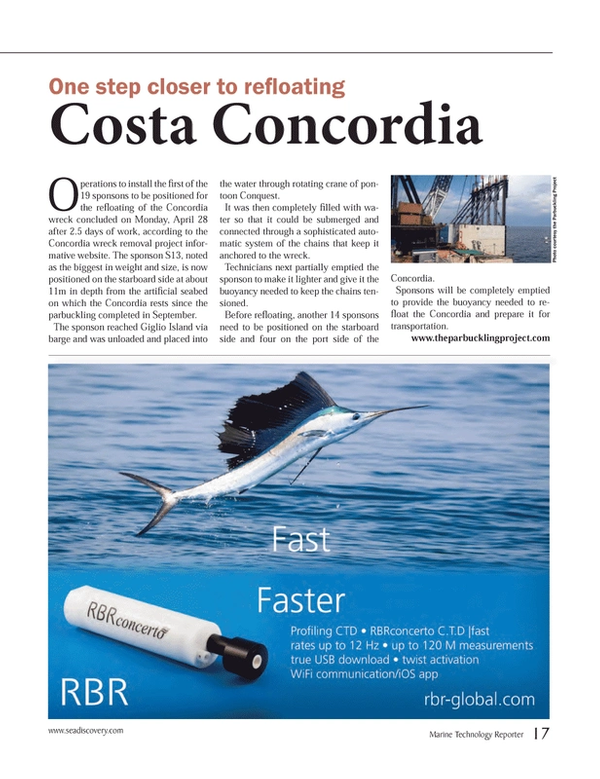 Read One Step Closer to Refloating Costa Concordia in Pdf, Flash or Html5 edition of May 2014 Marine Technology