In early May operations got underway at MHI Vestas Offshore Wind A/S, a new company dedicated to offshore wind turbine business jointly established by Mitsubishi Heavy Industries, Ltd. (MHI) and Vestas Wind Systems A/S (Vestas) of Denmark. The new joint-venture company (JV) consolidates the offshore wind power systems operations newly separated off from MHI and Vestas.
“Vestas has entered offshore wind turbine market already in the 1990’s and has been taking a firm foothold in the market,” said a spokesperson at MHI. “Vestas is a world leading manufacturer in onshore wind turbine and boasts a second position in offshore wind turbine.”
“MHI determined it to be suitable timing to establish the JV now based on a number of factors, such as the contemplated launching of 8MW wind turbine into the market,” continued the spokesperson at MHI.
MHI Vestas Offshore Wind is ready to perform a complete roster of functions relating to offshore wind turbines: from development, design, procurement and manufacture to marketing and after-sale servicing. Initially the JV will conduct business around Vestas’ current 3-MW V112, a gear-type wind turbine, and a newly developed 8 MW V164.
The new company is headquartered in Aarhus, Denmark. Capitalization has initially been set at approximately $198m, with MHI Holding Denmark ApS (MHD), an MHI group company in Denmark, and Vestas having equal ownership shares. In 2016 a call option will be exercised and the ownership ratios are planned to shift to MHD 51% and Vestas 49%. Going forward MHD is also scheduled to receive a maximum of $181.7m (amount equivalent to approximately 40% of MHD’s capital) in capital investment, in the form of preferred shares, from the Japan Bank for International Cooperation (JBIC).
“The Offshore wind turbine market is in positive trend and is expected to grow up for the long term period since a number of governments in the EU, especially the UK and Germany generally promote and provide support for installation of offshore wind as low carbon energy,” said the spokesperson at MHI.
“Based on the trend of several European government’s policies, the large sized offshore wind market will be launched from within coming five years. EU based competitors are also in developing over 6MW class large wind turbines.”
MHI Vestas Offshore Wind’s founding Chairman of the Board of Directors is Masafumi Wani, Chairman of Mitsubishi Heavy Industries Europe, Ltd. Vice Chairman of the Board is Vestas CEO Anders Runevad. The new company launches with 380 employees.
“Within the coming five years, we see that main market will be still in Europe, but we also will pay attention to possible business opportunities in other markets,” said the spokesperson at MHI.
Presently the most vibrant markets for offshore wind turbines are the North Sea coastal countries, particularly the UK and Germany, and robust growth in this region is expected to continue going forward. In response, manufacturers of wind turbines today are developing large-scale models and have launched proactive initiatives to attract orders. MHI Vestas Offshore Wind, bringing together the superlative technological capabilities and abundant experience of its two parent partners, looks to be a winner in the fierce competition in this field.

Profile of the New Joint Venture 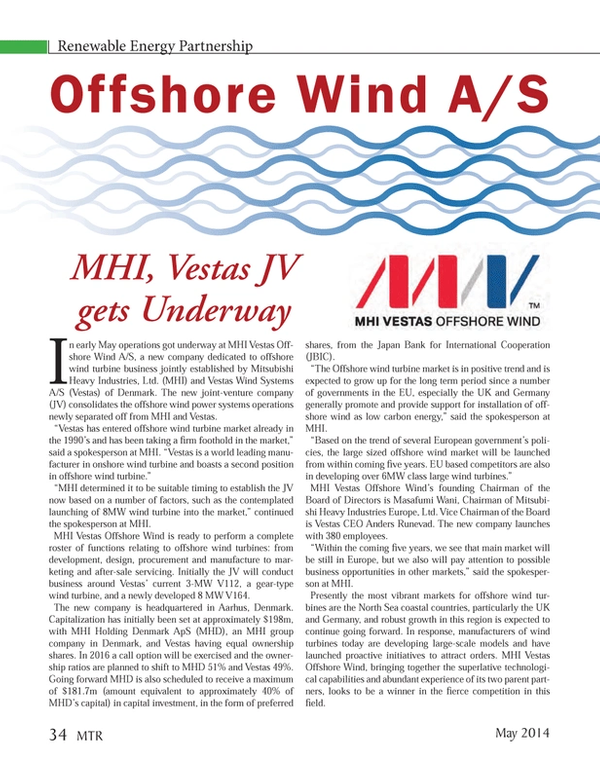