Since the first deployment of in-situ monitoring instrumentation, biofouling has been a problem. Without an effective solution, people have historically had to accept the limits biofouling imposes on ocean sensing work, with significant repercussions. When instrumentation is deployed in-situ, the value of the data taken during the deployment corresponds with the longevity: information gleaned from a longer deployment is often more useful than information from one of a shorter term. When marine growth begins encroaching upon sensors it alters the readings, rendering the data collected inaccurate. Biofouling can encumber instrumentation within a few weeks, severely limiting the duration of deployments and hindering environmental monitoring efforts.

Ocean observatory networks around the world are growing as efforts increase to monitor the world’s oceans. The technology used on observatories is allowing more in-depth research of these bodies of water than ever before. Since these underwater networks have in-situ instrumentation deployed for long periods of time, biofouling control is needed to keep sensor readings accurate and camera footage clear. Without biofouling control to maintain sensors and camera lenses, ocean observatories yield information of diminishing reliability over time.
Current antifouling methods have substantial drawbacks. Those encountering biofouling must choose between using toxic chemicals which harm the waters they are trying to monitor, and methods of limited efficacy, such as mechanical wipers and copper plating. Vulnerable to malfunction and fouling themselves, mechanical wipers are also unsuitable for sensitive lenses and surfaces with complex contours. Copper has a limited lifespan as an anti-foulant; its effectiveness decreases over time.  Significant technological advancements have been made in ocean monitoring instrumentation, but their full potential has not been reached due to the shortcomings of these antifouling methods.

Although the potential of UV radiation as an anti-foulant has been known for over three decades, this year marks the first it is commercially available. Looking to eliminate the leading cause of sensor drift, instrumentation manufacturer AML Oceanographic of Sidney, BC, Canada, began researching the prospect of UV light as a viable method of biofouling control for in-situ sensors. However, based on the encouraging results, AML broadened the scope of this method to include other devices installed underwater.

AML established the efficacy of UV light as a method of biofouling control first with fundamental tests of the technology, and then further testing with more advanced product prototypes in various environments. Once the basic technology was proven at the Institute of Ocean Sciences in Sidney, BC, and Ocean Network Canada’s (ONC) observatory at Folger Pinnacle off the west coast of Vancouver Island, an early prototype was developed. After local testing, this prototype was deployed at the Hawaii Undersea Research Laboratory near Honolulu, where biofouling is prolific. The trial demonstrated the effectiveness of UV light as an anti-foulant even in aggressive fouling environments. While unprotected surfaces of the platform were quickly inundated by marine growth, the sensors bathed in UV light and surrounding areas receiving UV light incidentally remained spotless. Longer term testing, once again at the ONC observatory at Folger Pinnacle, delivered the same results: after four months underwater, the UV protected sensors remained clean. In both tests, the unprotected sensors began to drift after two weeks, while the protected sensors maintained their measurement integrity for the span of the deployment. The test at ONC continued through July of 2014, nine months in total. Included in the deployment were three AML Metrec-X CTDs, two with UV-Xchange installed and one without. Also deployed was a Sea-Bird CTD with its chemical biofouling control system as a reference. Data from AML’s sensors protected by UV-Xchange remained in agreement for the duration of the test, and closely tracked the reference instrument. To confirm the maintained accuracy of UV-protected conductivity sensors, water samples were collected from the platform and analyzed with a laboratory salinometer. The results of this check verified C-Xchange conductivity sensors protected by UV-Xchange hold their accuracy. When compared to the salinometer-based ‘true’ values, the error of the UV-protected AML sensors was indistinguishable from the error of the reference sensor.

When the Folger Pinnacle platform was retrieved at the end of the trial, the sensors’ critical surfaces protected by UV-Xchange were not the only surfaces free of fouling. The camera sphere – situated over 30 cm from the nearest UV-Xchange – had a large clean patch due to receiving incidental UV light. Although AML’s UV technology has a conservative effective range listing of “up to 10 cm” depending on environmental conditions, the contact with the camera sphere demonstrated the reach extends further in certain situations.

Through the use of their Folger Pinnacle platform, Ocean Networks Canada has played a key role in the testing of UV biofouling control. Tom Dakin, Sensor Technologies Development Officer at ONC, is looking forward to seeing the effect this technology will have on ocean monitoring:
Biofouling is obviously a problem on our ocean observing systems. Poison is an undesirable mitigation strategy due to the long term environmental implications. Repeated manual cleaning is expensive and wipers are effective only on limited surfaces. The announcement of a UV antifouling system was therefore greeted with interest, but cautiously.

A technology demonstration was carried out by comparing a poison protected Seabird CTD to UV protected AML Oceanographic CTDs and an unprotected CTD. The results after 8 months were conclusive. The UV protection was as effective as the poison but had the benefit of being able to protect external surfaces as well as areas exposed to moving water. Based on the sensor protection success we are now eager to try this technique on camera lenses.

In another demonstration, Micro-X instruments with UV-Xchange installed were delivered to Fastwave Communications in Australia to protect hydrocarbon sensors used to detect oil. Retrofit to the sensors without any modifications required, AML’s UV technology was the only antifouling method suitable for keeping clean the sensors’ inlets due to their complex geometry. Rapid fouling of the sensors necessitates sending crews out often to clean off the heavy growth. UV-Xchange is expected to dramatically reduce these maintenance requirements, resulting in substantial cost savings. Two months into the deployment, Nick Daws, Director of Business Development at Fastwave, is pleased with the technology’s performance:

Due to the biofouling problems encountered in Australian waters, Perth based company Fastwave has been testing the AML UVX modules in local waters. Initial results look very promising, and when this first stage of evaluation is completed, testing will be moved to the tropical North West coast of Australia, where the most aggressive biofouling problems occur, particularly in the summer months as sea temperatures rise. Fastwave has deployed a substantial number of marine environmental monitoring systems in this region, and reducing the impact of biofouling on sensors will deliver significant benefits in terms of reduced sensor maintenance requirements. Successful deployments around the world in locations such as Canada, the United States, Australia, and Dubai have proven UV to be an effective anti-foulant in a wide range of environments. At the time of writing this, several other deployments around the world are in the early stages.

Since the technology’s debut at Oceanology International in London, overwhelming interest in UV as an anti-foulant for a vast array of underwater devices and unique applications has compelled AML to design another product to accommodate this demand. The result is Cabled UV. It shares the feature of adjustable, exchangeable LED modules with UV-Xchange, but instead of requiring an AML instrument to operate, it is simply a UV source integrated into the end of a cable. Cabled UV adapts to the strict requirements of a deployment, bringing UV biofouling control to a broader scope of applications. Cabled UV’s easy integration into a broad range of equipment and full customization of duty cycles makes it ideal for an extensive array of operations. In addition to a high volume of requests for Cabled UV on third-party CTDs, inquiries have come in for use on ADCPs, camera lenses, underwater lights, hydrophones, sonar heads, and more.
Human presence in the world’s oceans is surging, driving the need to expand ocean monitoring efforts. This increase of activity in the oceans is occurring simultaneously with the expansion of global awareness of our effect on the environment, demanding a method of biofouling control that enables optimal performance of monitoring devices with minimal environmental impact. As the most universally applicable anti-foulant, UV biofouling control has the potential to revolutionize ocean-based operations, extending the duration of in-situ deployments and improving the quality of information collected from our oceans. 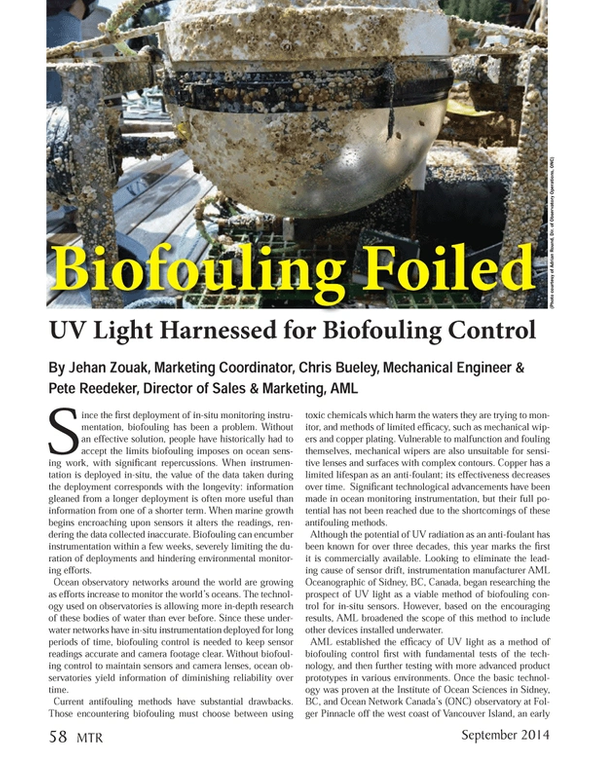