In an industry where innovation is common, Bibby HydroMap’s d’ROP system truly stood out at an active Ocean Business last month in Southampton. d’ROP is a custom developed solution by the company, touted to be a revolution in coastal ROV survey with particular productivity gains in shallow water survey and inspection. d’ROP was showcased onboard the new 27.5m purpose built semi-swath coastal survey vessel Bibby Athena, and was set to embark on its first commercial mission immediately after the exhibition.
In a market teeming with advanced ROV platforms and options, the first natural question for McLeay is: Why custom design this yourself?
“The decision was taken to develop the d’ROP as we have a set of very specific survey tasks that lie beyond the capabilities of existing observation class ROVs and require the dynamic capabilities of a powerful work class vehicle, said McLeay. “We obviously cannot accommodate a work class ROV spread aboard our own vessels due to size and weight limitations.  We also need the ability to be able to deploy in shallow water, something that is not usually associated with a work class ROV, and especially not with an offshore support vessel.  Much of our work is in coastal areas with strong tides and being able to work through an entire tidal cycle is a major advantage.”
While d’ROP surely does not look like any other vehicle in the field, there are some classic markers – namely four massive, powerful thrusters – that link it with its brethren.
“What we have effectively done is to take the basic components of a powerful work class ROV, strip off all the peripherals and redundant systems that we don’t need and have created a compact but exceptionally stable and powerful platform focused entirely on deploying survey sensors at the optimum geometry for maximum resolution and data quality,” said McLeay. “ In reality there was no existing single ROV product that could address our specific requirements.

Developing d’ROP
The d’ROP is based upon a concept conceived in-house within Bibby HydroMap, and started with a desk top study to look at the potential options to turn the concept into reality.  “A partnership was formed with a small company called HydroBotics which provide ROV engineering consultancy and project management services,” said McLeay.  “Hydrobotics were then contracted to manage the build, commission and deliver the system.  Bibby Marine Survey Services own the patent for the concept.”

Why d’ROP
d’ROP is a dynamic Remotely Operated Survey Platform that borrows and combines technology and operating principles from ROVs, ROTVs and modern dredging systems.
“The main operational advantages are the ability to maintain track or station in high current environments, automated launch and recovery, reduced number of support staff as a conventional pilot is not required, bringing work class capability to shallow water and providing a highly adaptable platform with high payload capability of up to 500kg,” said McLeay.
It is deployed vertically beneath the support vessel, getting vertical position from a heave-compensated winch and combined LARS, with its thrusters maintaining heading and altitude in relation to a survey line. Courtesy of its massive thrusters, it is designed to be able to hold station and remain stationary, operate at very slow speed for depth of burial surveying or track at up to four knots for acoustic survey. “The high power propulsion is to give the platform the ability to maintain position in strong cross tides as well as operate at up to 4 knots in acoustic survey mode.”
While it has numerous advantages, there is a drawback according to McLeay: “It has limited excursion ability and operates directly beneath the vessel only and is limited in depth capability by the available length of lift umbilical cable.”
Following its unveiling in Southampton, the unit was scheduled to  be deployed on its first live contract surveying an AC power cable and measuring depth of burial on one of the North West England wind farm sites.
According to McLeay, the decision on whether to hold this technology close or commercialize has yet to be taken. “Initially the platform was developed to service an in-house requirement although the level of interest in the system may prompt us to explore the possibility of producing multiple units for wider use.”

(As published in the MAY 2015 edition of Marine Technology Reporter - http://www.marinetechnologynews.com/Magazine) 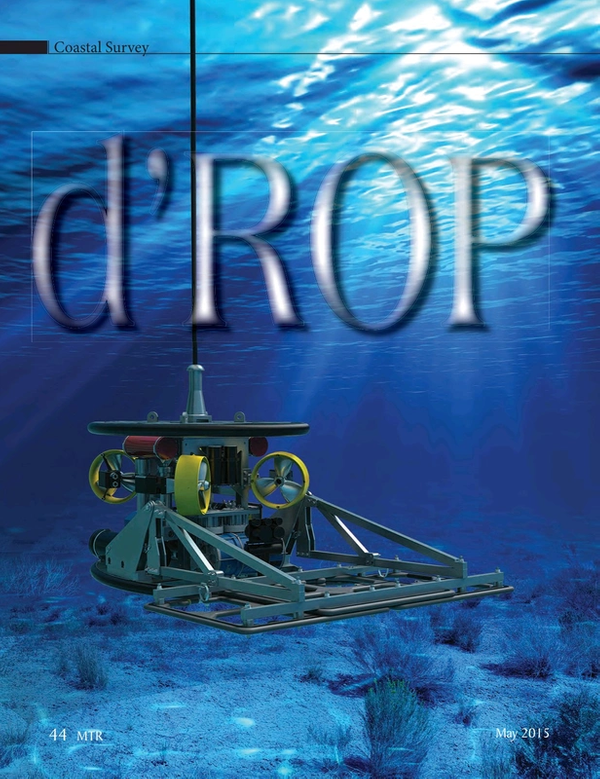