The Seamen’s Church Institute’s (SCI) Center for Seafarer’s Rights conducted its thirteenth annual Seafarer Shore Leave Survey during the week of May 18-24, 2014. Port ministries in 27 U.S. ports visited 416 vessels with 9,184 crewmembers (representing 60 nationalities). A total of 1,030 seafarers on 97 vessels were denied shore leave. An overwhelming majority (86%) of these seafarers were denied shore leave because they did not have visas. Other reasons for shore leave denials included terminal restrictions (7%), vessel operations (7%) and U.S. Customs and Border Protection restrictions (< 1%).
The problem, well known here in the United States, makes a difficult job even harder, especially considering that some of these mariners spend six months or more on board and never get to even go down the gangway during that period. Which brings up another issue: should the denial of shore leave be considered a violation of the newly enacted Maritime Labour Convention (MLC 2006)? We think it is. This year’s survey was the first SCI conducted after MLC came into force. Standard A1.4 Section 5(b) of the code requires shipowners to pay for seafarers’ visas. Furthermore, flag states must verify shipowners’ compliance with the MLC, 2006 recruitment and placement requirements, which include Standard A1.4 Section 5(b), before issuing a Maritime Labour Certificate. Curiously, approximately 79% of the seafarers denied shore leave because they did not have a visa were serving on ships registered in countries where MLC is in force. Notably, these included Antigua and Barbuda, Bahamas, Cyprus, Greece, Liberia, Malta, Marshall Islands, Panama, Philippines and Singapore.

CREWMEMBER VISAS: In this year’s survey, 86.4% of seafarers were denied shore leave because they lacked a valid crewmember (D or C-1/D) visa. The Convention on Facilitation of International Maritime Traffic (FAL) prohibits countries from requiring seafarers to have a visa for shore leave. The United States has ratified the FAL, but it nevertheless still requires crewmembers on merchant ships to have a visa to obtain shore leave. Ratification of the International Labour Organization’s Seafarers’ Identity Documents Convention (Revised), 2003 (ILO-185) would both enhance maritime security and increase seafarers’ shore leave opportunities in the United States. The Convention enhances maritime security by setting international standards for seafarer identification documents that provide reliable, verifiable and internationally acceptable seafarer identification. Countries that have ratified ILO-185 are obligated to accept valid ILO-185 seafarers’ identification documents in place of visas for the purposes of shore leave. The United States could comply with ILO-185 by waiving visa requirements for seafarers who have valid ILO-185 seafarers’ identity documents. For security, the US could maintain its existing 96-hour pre-arrival crewmember vetting process and verify ILO-185 seafarers’ identity documents supplemented by the US-VISIT program in American seaports.

Founded in 1834, the Seamen’s Church Institute of New York & New Jersey is the largest, most comprehensive mariners’ agency in North America. Annually, chaplains visit thousands of vessels in U.S ports, along 2,200 miles of America’s inland waterways and into the Gulf of Mexico. Every year, SCI provides training to 1,600 mariners via simulator facilities in Houston, TX and Paducah, KY. The Institute and its attorneys are recognized as leading advocates for merchant mariners. Download the complete survey results at:
http://smschur.ch/shoreleave2014 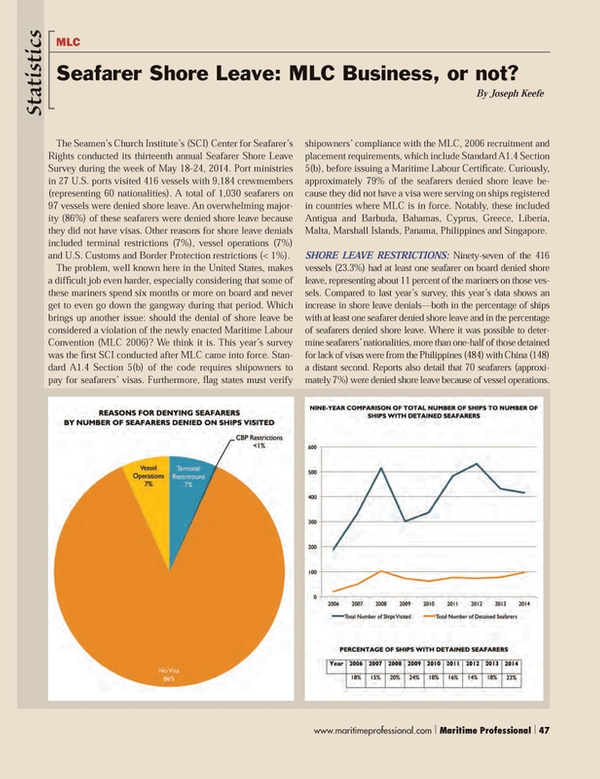