Searching for a career with Military Sealift Command?

For the inaugural insertion of Maritime Professional Recruiter MarPro sought and delivers insights from one of the leading maritime recruiters in the United States and the world, the Military Sealift Command, with a workforce that consists of more than 9,500 people worldwide, most of whom serve at sea. In fact, about 80% of its people serve at sea, aboard non-combatant Navy ships, as civil service mariners (CIVMARs) who are federal employees.  The remainder includes commercial mariners, civil service personnel ashore and active duty and reserve military personnel. All MSC ships, unlike other U.S. Navy ships, are crewed by civilian mariners.

A Storied History
During World War II, four separate government agencies controlled sea transportation. In 1949, the Military Sea Transportation Service became the single managing agency for the Department of Defense’s ocean transportation needs. The command assumed responsibility for providing sealift and ocean transportation for all military services as well as for other government agencies. Only nine months after its creation, MSTS responded to the challenge of the Korean War. On July 6, 1950, 11 days after the initial invasion of South Korea by North Korean troops, MSTS transported the 24th Infantry Division and its equipment from Japan to Pusan, South Korea, for duty. During the Vietnam War, MSTS was renamed Military Sealift Command. Between 1965 and 1969, MSC transported nearly 54 million tons of combat equipment and supplies and nearly 8 million tons of fuel to Vietnam. MSC ships also transported troops to Vietnam, which marked the last use of MSC troop ships.
During the first Persian Gulf War’s Operations Desert Shield and Desert Storm, MSC ships delivered more than 12 million tons of wheeled and tracked vehicles, helicopters, ammunition, dry cargo, fuel and other supplies and equipment during the war. At the height of the war, MSC managed more than 230 government-owned and chartered ships.
As of January 2013, MSC ships delivered more than 25.7 billion gallons of fuel and moved 126.2 million square feet of combat equipment and supplies to U.S. and coalition forces engaged in operations supporting Iraq and Afghanistan.

Special Mission
The Special Mission program has approximately 24 ships that provide operating platforms and services for a wide variety of U.S. military and other U.S. government missions. The diversity in this category includes submarines and special warfare support ships, oceanographic survey ships, missile range instrumentation ships, as well as the Sea-based X-band radar platform, known as SBX-1, which is part of the U.S. Ballistic Missile Defense System.

Prepositioning
MSC’s Prepositioning Program is an essential element in the U.S. military’s readiness strategy. Afloat prepositioning strategically places military equipment and supplies aboard ships located in key ocean areas to ensure rapid availability during a major theater war, a humanitarian operation or other contingency. MSC’s 26 prepositioning ships support the Army, Navy, Air Force, Marine Corps and Defense Logistics Agency. Prepositioning ships provide quick and efficient movement of military gear between operating areas without reliance on other nations’ transportation networks. These ships give U.S. regional combatant commanders the assurance that they will have what they need to quickly respond in a crisis - anywhere, anytime. During a contingency, troops are flown into a theater of operations to rapidly employ the cargo from these ships.
Many of MSC’s prepositioning ships are able to discharge liquid, containerized or motorized cargo both pier side or while anchored offshore by using floating hoses and shallow-draft watercraft, called lighterage, that are carried aboard. This allows cargo to be ferried to shore in areas where ports are non-existent or in poor condition and gives the nation’s military forces the ability to operate in both developed and undeveloped areas of the world.
Prepositioning ships include a combination of U.S. government-owned ships, chartered U.S. - flagged ships and ships activated from the Maritime Administration’s Ready Reserve Force. All prepositioning ships are operated by U.S. civilian mariners who work for ship operating companies under contract to the federal government.
While most active ships in MSC’s Prepositioning Program strategically place combat gear at sea, there are other ships, including:

Service Support
MSC’s Service Support Program ships provide our Navy with towing, rescue and salvage, submarine support, and cable laying and repair services, as well as a command and control platform and floating medical facilities. The program also includes our Navy’s first designated interim afloat forward staging base, USS Ponce (AFSB(I) 15).
All ships in the program are government owned and operated by civil service mariners (CIVMARs), experienced maritime professionals sailing as Navy civilians under MSC. Several ships have hybrid crews of CIVMARs and uniformed Navy personnel working under the leadership of a U.S. Navy captain. This crewing structure allows the ships to maintain their commissioned status.

Sealift
MSC’s Sealift Program provides high-quality, efficient and cost-effective ocean transportation for the Department of Defense and other federal agencies during peacetime and war. More than 90 percent of U.S. war fighters’ equipment and supplies travels by sea. The program manages a mix of government-owned and long-term-chartered dry cargo ships and tankers, as well as additional short-term or voyage-chartered ships. By DOD policy, MSC must first look to the U.S - flagged market to meet its sealift requirements.
Government-owned ships are used only when suitable U.S.-flagged commercial ships are unavailable.
In this category, the Joint High-Speed Vessels are the Navy’s new ship class, designed for rapid, intra-theater transport of troops and military equipment. 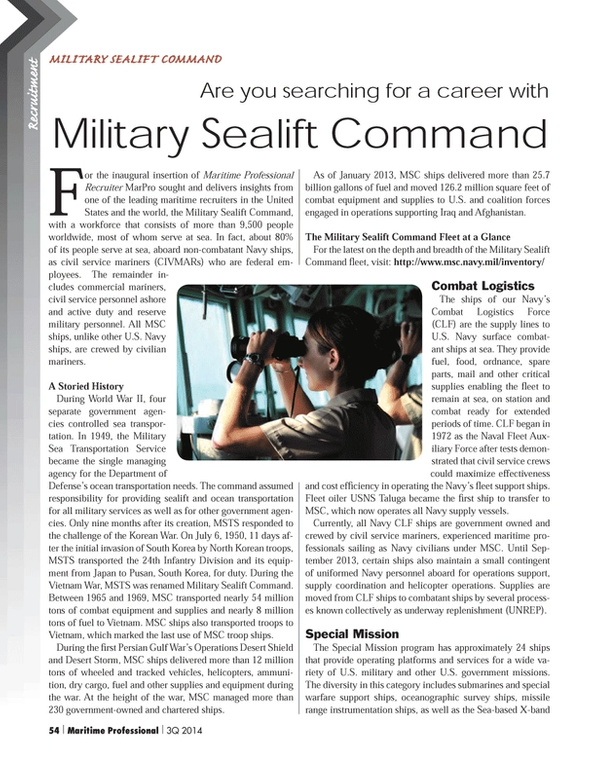 Read Searching for a career with Military Sealift Command? in Pdf, Flash or Html5 edition of Q3 2014 Maritime Logistics Professional