Maintaining Separate Identities and Sharing of Competitive Information in U.S.
Since the advent of the proposed, but never implemented, P3 Alliance in 2013, the sharing of commercially sensitive information between parties to a vessel sharing agreement (VSA or Alliance) has been a hot topic. The proposed P3 Network Vessel Sharing Alliance (P3 Alliance) would have consisted of Maersk, CMA CGM and Mediterranean Shipping Company (MSC); the world’s three largest ocean carrier companies by volume of containers carried. The Federal Maritime Commission (FMC) was concerned, in part, with the ocean carriers sharing competitively sensitive information such as pricing data and then use their collective market power to drive-up the transportation rates.
While the three largest carriers would be collaborating operationally, their Agreement filed with the FMC contained assurances that the carriers would continue to compete with each other on pricing and cost – meaning shippers would continue to be able to negotiate with each carrier individually. In fact, in the P3 vessel sharing agreement itself, proposed language stated, “Each party shall retain its separate identity and shall have fully separate and independent sales, pricing and marketing functions.” The language further read, “No information which is commercially sensitive may be exchanged directly or indirectly between any of the Parties …”
There was also an additional problem, in particular, that I as a Commissioner was concerned with – namely, joint contracting authority by the Parties. Basically, the P3 Parties originally proposed authority to use their collective network in order to jointly negotiate with third parties including tug and barge operators. Objections were raised by the Commission and the P3 Parties subsequently withdrew the original language and substituted new language requiring each party to negotiate independently and enter into separate contracts with the third parties.
In the end, the People’s Republic of China rejected the P3 Alliance, largely based on trade route market share and the proposed organizational structure of its “Network Centers.” First, China’s Ministry of Commerce held fast to a 30 percent market share threshold for controlling a trade route. In its review, China’s Ministry of Commerce found that the P3 Network would control up to 47 percent of the container business on the Asia-Europe service route. Next, China took exception with the Parties’ proposal to jointly establish a Network Center to conduct the daily management of operations according to pre-agreed working procedures. China concluded that the P3 Alliance was substantially different than traditional shipping alliances, and would act more like a “close joint venture.” Therefore, the P3 was rejected.
Even though the P3 Alliance failed, its basic blueprint formed the foundation of what we see today in the new generation of alliances. All of the alliance agreements between carriers trading with the Unites States contain assurances that the carriers continue to compete with each other on pricing and cost. In addition, the agreements contain provisions on not sharing commercially sensitive information.
Hong Kong Raises Concerns: Sharing of Competitive Data
This past summer, Hong Kong’s Competition Commission (HKCC) refused to grant a block exemption to companies desiring to exchange market information, citing “competitive concerns.”
In December of 2015, the Hong Kong Liner Shipping Association petitioned the HKCC seeking a block exemption order covering vessel sharing agreements (VSAs) and voluntary discussion agreements (VDAs). According to the HKCC, VSAs (which include consortia, slot exchange agreements, joint service agreements and alliances) are agreements between shipping lines on certain operational arrangements. VDAs are agreements pursuant to which shipping lines discuss certain commercial matters relating to particular shipping routes.
The HKCC did not have a problem with the VSAs because the parties to a VSA do not collectively exceed a market share limit of 40 percent. Further, HKCC noted, the VSAs do not authorize or require the shipping lines to engage in cartel conduct. The HKCC also determined that the liner companies have the ability to withdraw from a VSA without incurring a penalty after giving reasonable notice to withdraw. Thus, HKCC issued a conditional five-year block exemption order for liner vessel sharing agreements.
However, the HKCC did have a problem with allowing a block exemption for the VDAs. The HKCC decided not to issue a block exemption for VDAs, or the revised VDA scope, on the basis that it “was not demonstrated that the criteria for the economic efficiency exclusion were met.” In particular, the HKCC noted a lack of evidence or data in support of the arguments put forward in the application. The HKCC’s stated that the empirical evidence presented did not adequately substantiate the efficiency claims to allay the Commission’s concerns. The sharing of competitively sensitive pricing information between competitors and the agreement of recommending pricing guidelines may give rise to competition concerns said the HKCC in an accompanying statement. Accordingly, the HKCC believed carriers are more likely to raise prices high above the market level under such discussion agreements.
The sharing of competitively sensitive information between competitors remains an important issue in the liner trades. The Federal Maritime Commission early on recognized the competitive concerns related to pricing and costs if members of an alliance are allowed to share competitively sensitive information. Now, it appears Honk Kong has laid down its marker in the same manner – outlawing sharing of competitively sensitive pricing information between competitors. I am fairly certain more jurisdictions are paying close attention to matters regarding information sharing between competitors.
The Author
William P. Doyleis a Commissioner with the U.S. Federal Maritime Commission. The FMC, among other things, regulates liner companies, ocean transportation intermediaries and marine terminal operators.
The thoughts and comments he expresses here are his own and should not be construed to represent the position of the Commission or his fellow Commissioners.
(As published in the September/October 2017 edition of Maritime Logistics Professional) 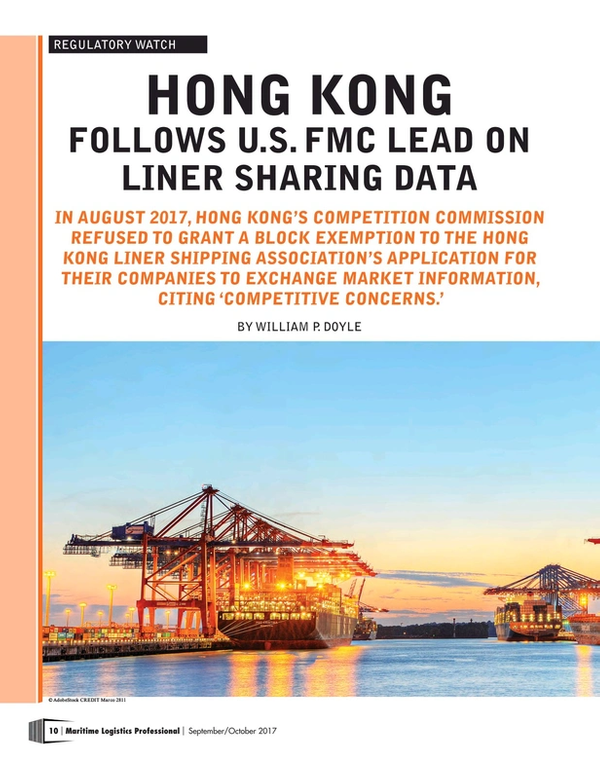