IMO Orders Fuels of the Future

Globally, new regulations are coming into effect governing the Sulfur Oxide (SOx) limits and CO2 emissions. The International Maritime Organization (IMO) has updated the maximum amount of SOx allowed in fuels and the European Commission is introducing new reporting requirements to monitor CO2 emissions. Understanding the impacts of these changes on ship owners and operators is critical given the market conditions for maritime services.
IMO 2020 and Bunker Fuel Pricing
As of January 1, 2020 the IMO will require a reduction in the sulfur content of fuel oil of all ships to a global sulfur limit of 0.50 percent m/m (mass/mass), from the current global level of 3.5 percent m/m. While this new limit will not change the lower limits in SOx Emission Control Areas (ECAs), it will cause a significant change in the demands for certain bunker fuels. By January 1, 2020, the IMO’s new standards should reduce heavy fuel demand by more than 2 million barrels a day, according to industry consultant FGE. Separately, a Wood Mackenzie study estimates meeting the new fuel standards will cost the world shipping industry $60 billion a year.
Fuel Oil, high in sulfur content, has been the traditional bunker fuel for the maritime industry. With the new IMO regulations, ship owners are left with few options:
Changing fuels completely across the world will be difficult, as refiners aren’t necessarily able to quickly scale to higher demand and potentially will need to build new coker units to fill the need. The International Energy Agency (IEA) stated that the lowering of the bunker fuel emissions cap is “easily the most dramatic change in fuel specifications in any oil product market on such a large scale.” Since most vessels are presently using High Sulfur Fuel Oil (HSFO) for long haul trade, and only using Low Sulfur Gas Oil (LSGO) in ECA zones or for certain costal carriers, there isn’t an abundance of supply for LSGO at this time.
Due to the current lack of demand, there are not enough refineries or suppliers to absorb the dramatic increase in necessity for LSGO that will result when this regulation goes into effect. Refiners are evaluating investments in capital projects to account for this demand increase so that they can produce more LSGO. Forecasts have shown costs for lower sulfur bunker fuels rising anywhere from 40 to 200 percent, with most trending on the higher end. More specifically, a Very Large Crude Carrier (VLCC) with an average fuel cost of $6.2 million in 2018 could see a fuel costs rising to between $8.5 and $12.5 million in 2020. An Aframax which would average $2 million in fuel costs for 2018 could see fuel costs over $4 million in 2020.
If scrubbers are the chosen solution, ship owners will need a clear view of their finances to see if they have access to credit, for the large up-front capital costs of a scrubber. In addition to the capital costs, ship owners will have to consider the loss of revenue during servicing time in dry dock to install the scrubber. Depending on how many ship owners choose the scrubber route to solve the emission requirements, yard space will likely be at a premium and require longer lead time to schedule.
Another alternative is to look at converting the vessel engine to run on less expensive LNG, but this option requires an even higher investment by the vessel owner that will need to be weighed against the commodity prices, fuel spreads and availability of LNG globally as a fuel.
While certainly not recommended, ship owners will need to take a view on the potential risks of ignoring the regulation, including the expected negative reaction from investors, clients, regulators and the general public if they are caught. While this may be an alternative in the short term, when low sulfur fuel is not readily available, it is a risky option over time.
The EU Complication
Further complicating the maritime control space is the new emission reporting requirements for CO2 in Europe. European Commission is adding maritime emissions into its 2009 climate and energy package. European Union’s upcoming Monitoring, Reporting and Verification (EU MRV) regulation requires ship owners and operators of ships over 5,000 GT to monitor and report their CO2 emissions on all voyages to, from and between any EU or EFTA port. This regulation, 2015/757, came into force on July 1, 2015 and requires per voyage reporting beginning in January of 2018. By August 31, 2017 all ship owners are required to provide monitoring plans to an accredited verifier.
The EU MRV requires ship owners to report on specific parameters of fuel consumption. Presently, there are four acceptable fuel consumption monitoring methodologies:
Other relevant voyage details will also be required, including distance travelled, time spent at sea, port of departure and arrival with date and time of departure and arrival, cargo carried and transport work.
The shipping industry is critical for global trade, responsible for transporting about 90 percent of goods; fuel costs account for up to 80 percent of total voyage expenses, according to Platts. These regulations are coming at a time of prolonged financial stress for much of the maritime industry. Ship owners and operators need to choose wisely in their strategy for dealing with the sulfur cap and their emission reporting methodology. Those able to offer the lowest freight rates stand to increase their market share as shipping margins become even tighter.
The Author
James Morgan is a Director in Opportune LLP’s Process & Technology practice. He has more than 17 years’ experience in the energy industry, primarily focused in the trading and risk management area. He is experienced in all aspects of a project life cycle from strategy definition and business case development to production support, for both packaged and custom software implementations. He can be reached at [email protected]
(As published in the September/October 2017 edition of Maritime Logistics Professional) 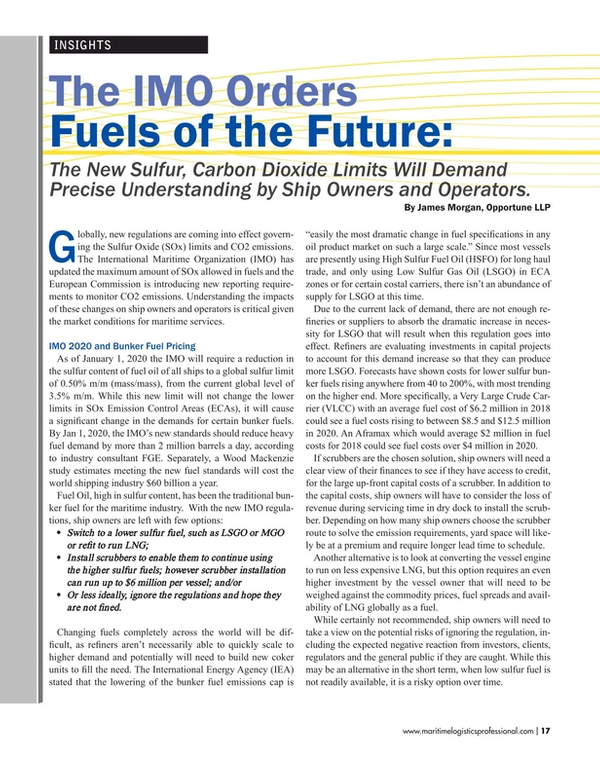