Doubling Down on Domestic Dredging

U.S. Dredgers Weigh in on Infrastructure, U.S. Capabilities and the road ahead.

Domestic dredging firms face many challenges in the coming months and years. At the same time, opportunities abound in a market and political climate that seems to beg for infrastructure upgrades, especially when it comes to harbors and inland waterways. Weighing in this edition on all of that – and more – are three U.S.-based dredging firms; Callan Marine, Cashman Dredging, and Weeks Marine.

Cranford, NJ-based Weeks Marine, Inc. (WMI) is a family-owned company with roots on the New York City waterfront extending back to 1919. Today, WMI has offices and repair yards in the North Atlantic, Gulf of Mexico, Hawaii, and Ontario, Canada. Eric Ellefsen is the President of Weeks. The company has three key divisions – Construction, Dredging and Marine Services – as well as two major subsidiaries, Healy Tibbitts Builders, Inc. and McNally International, Inc.

Jay Cashman is the Founder and chairman of the board at Cashman Dredging. Cashman Dredging’s history dates back to the late 1800s. Over time, the company has evolved and began performing marine construction in the 1970s after the Blizzard of '78 destroyed seawalls and jetties throughout New England. Soon, Cashman was performing multi-million dollar projects such as construction of a new marine facility for the Martha's Vineyard Steamship Authority. Today, Cashman Dredging and Marine Contracting provide an array of integrated solutions ranging from navigational, maintenance and environmental dredging, to pond and industrial dredging.

Maxie McGuire is President of Callan Marine, LTD. This Texas-based and family-owned dredging business was founded in 2009. Callan Marine performs dredging projects for both private and public clients by providing services to restore berthing depths for ship docks and navigation channels. This year, Callan is partnering with Great Lakes Dredge & Dock Corporation on the San Jacinto River in Houston, TX. Through the ongoing construction of the General MacArthur, Callan Marine will enter into the large dredging market in the areas of major waterways, beach reclamation, and wetland restoration. Separately, the recent acquisition of Bean Coastal and their management team will allow Callan Marine to continue its penetration into the dredging industry, as it establishes new standards for efficiency and effectiveness.

Listen in as the voices of the U.S. dredging industry weigh in on the most pressing issues of the day:

Does the United States today have the collective dredging capacity to accomplish all of the maintenance dredging and the increasing number of deepening projects that are being started in the response to the Panama Canal Expansion?

Jay Cashman: Yes, we do. The dredging industry is continuously building vessels and equipment. We keep up with demand.

Maxie McGuire: Yes, there is adequate fleet capacity as well as a significant amount of new builds in progress and recently entering the market due to the increase in funding for our nation’s infrastructure investments. We’re able to make investment decisions that will carry based on a level of certainty that we are comfortable with.

Eric Ellefsen: The U.S. industry has proven it is large enough to complete all of the Nation’s maintenance dredging and new work dredging in our ship channels. Land reclamation, mostly shore protection on the beaches, has also been a growth market that the industry continues to respond to.  In fact, navigation interests will benefit from the ongoing industry investment to better serve the reclamation market. There will always be either unforeseen, or unprepared for, challenges that might produce a short-term hopper dredge shortage on occasion. In the winter, when every entrance channel in the South Atlantic must be maintained over a four-month period due to an environmental window, coupled with a simultaneous rise in the Mississippi River, sometimes puts a little stress on the hopper dredging sector. However, industry works closely with the Army Corps of Engineers (Corps) to mobilize dredges from other projects to address these national needs. Today, the Corps Ready Reserve dredge Wheeler supplies that fire truck response in the Lower Mississippi. In the future, we believe the Corps could save money by using a private sector solution; for example, using a proven ready reserve approach. We are working with the Corps and other interested parties on an industry first solution.

What’s your fleet renewal strategy and are you planning any newbuilds in the near term? Tell us about your newest assets and what’s coming next.

MM: We are currently building a large market cutter suction dredge, the General MacArthur, for new work, land reclamation, beach renourishment, and maintenance dredging. It is expected to be commissioned in Q2-Q3 2019. Our other assets are new, as well, dating back to 2018, 2017, and 2009 respectively. The General MacArthur is currently under construction at C&C shipyard in Louisiana.

EE: Weeks has been making major investments over the last decade, both in dredging vessels and all the support equipment necessary to perform major dredging projects. Ancillary equipment, including boosters, barges, boats and miles of discharge pipeline are an essential component of any dredging operation. Every Weeks dredge makes use of advanced automation, and ever more powerful and fuel-efficient engines to drive both propulsion and pumps. Our newest hopper dredge, MAGDALEN, just went to work on the Atlantic Coast this year (2018). She was built in Eastern Shipyard, Panama City, FL, and is the size of our two existing hopper dredges combined. She is fast, shallow draft, and can pump out over long distances, thereby reducing the need for booster pumps. We are very happy with her early performance and look forward to seeing all that she will do the years ahead. Both the modernized and highly automated BE Lindhom and RN Weeks will continue to be an important part of our workhorse hopper dredge fleet. We are also building another large sea-going pipeline dredge at C&C Marine in Belle Chase, LA. While Weeks has a large fleet of cutter suction dredges, the JS Chatry will be the most advanced. In July 2012, the CR McCaskill entered our ocean-going cutter suction pipeline dredge fleet. For the last six years, she has been working almost non-stop on projects around the country. The Chatry builds on the capabilities built into the McCaskill and will join our fleet sometime next year.

The use, placement and disposal of dredge materials can be a hot issue. Often, that decision has made during the pre-project EIA and is out of your hands. How, if at all does a commercial dredger get involved in these issues?

EE: Controversies over the placement of dredged material have lessened over the years as the agencies have become more comfortable with beneficial uses of dredged material for environmental enhancement or restoration. The use of sediment beneficially, including the placement of beach quality sand, has had a dramatic impact on our capital investments over the last 20 years. In a competitive market, we have put more power on the dredge and booster pumps and significantly enhanced the capabilities of our fleet of support equipment. These more complicated projects also require more highly trained surveyors and heavy equipment operators at the placement site.
We do not usually get involved in the project planning process. However, if an agency or engineering firm wants to know whether their plan is buildable, or the relative costs of various placement alternatives, they will often call our estimators for advice. We want to help find solutions that work for everyone.

MM: We have relationships with our clients, engineers, and the permitting agencies, so we try to help our customers with education and planning so they are prepared when the time comes to execute their projects.

Describe your fleet and operational equipment mix. Do you specialize in one form or dredging over another?

JC: Cashman is the premier bucket and environmental dredging company in the United States. We have bucket dredge sizes of 4 yards to 50 yards; 2 backhoe dredges of 5 yards to 18 yards; 1 hopper dredge; and five environmental bucket dredges. We’re proud to have completed the largest environmental remediation dredging project in U.S. History – the Upper Hudson River PCB remediation project for GE. Aside from environmental, Cashman does all types of dredging including navigation (Arthur Kill Channel for access to Port of NYNJ), beach renourishment (Florida) and pond & industrial work (Maryland).

What is the most pressing issue on your plate during this calendar year?

MM: Given the very low unemployment rate, recruiting is a big issue.

JC: We are always looking to innovate at Cashman. We recently developed and presented to industry the Scow Geofence System (SGS). Out split-hull scows will not dump unless they are within the predetermined geofenced ocean disposal area. That’s something we’ve just completed. What comes next is even bigger as we turn our attention to hopper dredge design and construction.

The USACE performs a good portion of U.S. dredging, yet the private sector is a critical part of the overall equation. Where do your projects emanate from – government or commercial?

JC: It’s really a combination of all types of dredging depending on the year. For instance, we just kicked off the second phase of the Boston Harbor deepening project and we’re using the largest crane and bucket dredge combination in North America. We’re also working on the Flushing Bay dredging project cleaning out the southern portion of the East River for the New York City Department of Environmental Protection. We do it all.

MM: Our work is a mixture of government and private work, with private being approximately 75% of our work this year. In 2019, that will shift to a 75% government share, given the size and production capacity of the General MacArthur.
www.weeksmarine.com 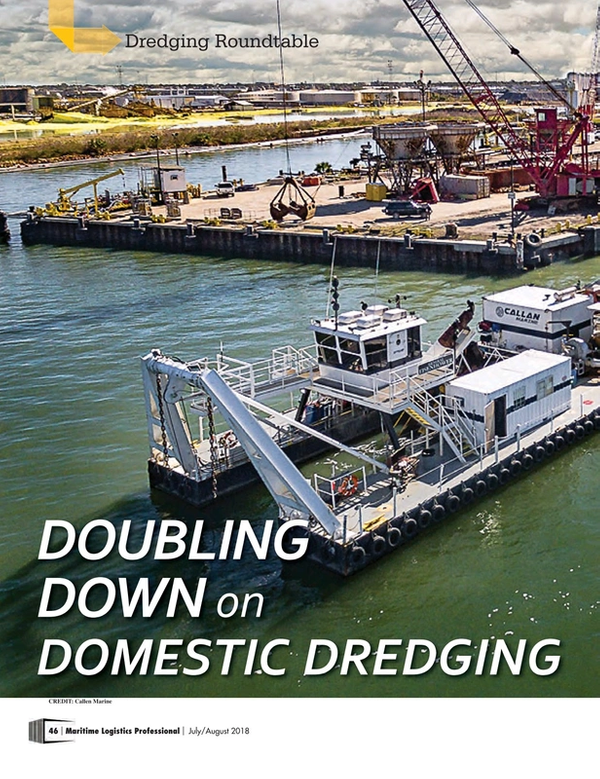