In 1921, Thomas Edison told Forbes magazine, “I have not failed. I’ve just found 10,000 ways that won’t work.” He could have been talking about Olmsted. That’s because, after more than 30 years of frustratingly slow progress, cost overruns and more than a few mistakes, Olmsted is finally poised for success. That’s something to celebrate.

It is official: The U.S. Army Corp of Engineers (USACE) wants Olmsted operational by October. And, not a moment too soon. After more than 30 years, the ribbon cutting to officially open the Olmsted Locks and Dam will take place on August 29. The very old (1929) upstream locks and dams – Nos. 52 and 53, which Olmsted is replacing – will be dismantled by December 2020. Before that happens, Olmsted’s performance will be tested and confirmed. On the Ohio River at Olmsted, IL, about 10 miles north of Cairo, IL, where the mighty Ohio flows into the mighty Mississippi, this crucial piece of American infrastructure is finally almost in place.

Just about everyone involved with Olmsted, with stakeholders spanning four decades across the breadth of the USACE to members of Congress and commercial maritime operators, all likely welcome this news with the same response: It’s about time.

The Agony of Olmsted
To say that the 2,596-foot Olmsted dam is situated on a vital section of the Nation’s inland waterways would not give full weight to the importance of this critical infrastructure. Barge traffic moving between the Mississippi River system and the Ohio, Tennessee, and Cumberland rivers must pass through this stretch of the Ohio. The tonnage passing through this section, over 90 million tons annually, exceeds every other section of America’s inland navigation system. Olmsted isn’t just about critical transportation – its operations are integral to the entire Midwest economy.

Most people whose business is aligned with waterways issues are only too familiar with Olmsted’s endless challenges. To summarize (based on a 2017 GAO “Report to Congressional Committees”), Olmsted was first authorized within the Water Resources Development Act (WRDA) of 1988 at a cost of $775 million, with construction estimated to take seven years. An appropriation for construction was first made in 1990 but the Corps did not award money for a construction project until 2004 – 14 years later. The 1990s were given over to technical analytical work regarding a construction method – evaluating the more traditional “in-the-dry” method, using cofferdams which block the flow of water around a site, versus a newer, but less familiar “in-the-wet” method, more difficult but promising more flexibility and a lower final cost. ‘In-the-wet’ was chosen in 1997, and a new construction estimate was arrived at: six years. But, even the in-the-wet decision didn’t deliver much certainty. It was repeatedly re-examined, even as late as 2012 – eight years after initial project funding.

Contracts were also a challenge. In 2002, the Corps requested proposals for construction as a firm fixed-price, but received no offers, because according to subsequent Corps’ analysis, the construction method was innovative, the river conditions were too risky, and a potential contractor could not get bonding.

In 2003, the Corps offered a cost-reimbursement contract, receiving two offers. In 2004 – sixteen years after authorization – a contract was awarded to Washington Group/Alberici (WGA) Joint Venture. The winning proposal was $564 million. Still another new construction estimate (8 years) was arrived at. Nevertheless, the project continued to flounder.

In 2006 and again in 2011, new baseline estimates projected cost increases – by $81.6 million in 2006 and by a whopping $551.1 million in 2011 and increased the construction schedule by 4 to 5 years.  There were many reasons, some surely external to the project. And, everyone had an excuse. The 2005 hurricane season, for example, which included Katrina and Rita, created a scarcity of barges and cranes when the contractor was trying to mobilize equipment and barge prices doubled. From 2002 to 2007, fabricated steel prices increased about 300 percent, cement 90 percent, riprap by 100 to 200 percent and fuel about 300 percent. Insurance and bonding costs went up about 230 percent.

Fundamentally, it was the numerous and unknown struggles with in-the-wet construction that checked early project momentum. The dam portion of the project, for example, included pre-cast concrete shells, building blocks weighing up to 5000 tons each, moved from a fabrication site, via a rail sled, to a catamaran crane barge – the largest in the world – and then moved upriver, and lined up at a 30-foot depth across the river bottom, an underwater task demanding ¼ inch tolerances.

In many ways, the Olmsted project was remarkable; arguably the civil engineering equivalent to the Manhattan project. Nothing was off the shelf, just about everything had to be invented and developed, from computer modeling to the barge mounted crane that will lift 140 steel wickets attached to the top of the underwater shells. In every aspect, Olmsted demanded an extensive and expensive learning curve.

Angst on the Hill
Naturally, Olmsted’s challenges attracted Congress’ attention.  In 2012, it was clear that Olmsted would exceed its maximum authorized cost. The Corps prepared a PACR – a “post authorization change report,” seeking to increase the authorized cost to $2.918 billion, approved by Congress in 2014. There were many related funding issues. Olmsted was gobbling up all of the money in the Waterways Trust Fund; leaving very little for other critical projects. Congress’ 2014 legislation limited how much Trust Fund money could go to Olmsted, from a 50% Fund share to 25% and then to 15%.

Critically, Congress also declared that Olmsted should get no less than $150 million/year until it was finished. These funding and policy shifts paid off. Work on Olmsted had been plagued by unpredictable and intermittent funding – sometimes work was deliberately slowed or delayed because of money issues. Once predictability was set, the project’s schedule smoothed out. Since the 2012 PACR, the Corps points out that Olmsted has stayed within the time and budget constraints of this critical reset. The PACR ceiling was $3,099,000,000. The 2016 total estimated cost: $3,059,266,000.

Around the Next Bend in the River
After 30 years, project fatigue finally shifts to the rear-view mirror. The upcoming ribbon cutting isn’t a wake – it’s a beginning. Olmsted means action – and for inland waterways operators Olmsted is major league.

The Corps estimates that Olmsted will produce average annual national economic benefits of more than $640 million. Operation and maintenance costs will be reduced. New locks mean fewer delays, which raise prices. Olmsted’s two 1200 x 110-foot locks will eliminate transit double-locking. Most tows on the Ohio – a towboat and 15 barges – measure 1150 feet by 105. Now, these sets will not have to break up and re-fleet. Lockage time will drop to less than an hour, compared to five hours through Locks and Dams 52 and 53 (when they work and often, they do not at precisely the wrong moment).

In 2017, for example, the late year infrastructure failure(s) at Lock 52 was unquestionably one of the biggest stories of the year for the domestic waterfront. At one point in the crisis, average delays of 65+ hours were being experienced by a queue 58 vessels and 658 barges waiting their turn. Another unscheduled maintenance issue saw Lock and Dam 52 closed for almost nine days in September. Hence, if time is money, Olmsted is sound currency.

Catharsis
In late July, the Waterways Council, Inc. (WCI) arranged for its members and the press to visit the Olmsted site. Stakeholders from all spectrums and who collectively depend on river transport spoke to the importance of Olmsted finally coming on line. Deb Calhoun is Senior Vice President for WCI and she perhaps said it best when she said, “The opening of Olmsted will represent true modernization on the inland waterways and will provide reliability and operational consistency that commercial carriers and shippers have waited a long time for.”

Reliability and consistency are highlighted, repeatedly, by WCI members. Dan Mecklenborg is Senior Vice President and Chief Legal Officer and Secretary at Ingram Barge Company and a member of the Corps’ advisory Inland Waterways Users Board.  Mecklenborg commented that lockage at Lock 52 now takes an hour – “if it’s working.”  He expects Olmsted lockage to drop to “a reliable 30 minutes.  Reliable,” he stressed again, adding that Olmsted is “important for Ingram and strategic for the country.”

Separately, Illinois-based Garry Niemeyer is President of the National Corn Growers Association.  Niemeyer presents a concise cost-benefit summary: He pays $0.40/bushel to ship corn via barge. Via train? $0.80. And, even worse via (environmentally inferior) trucks: $4.00.

Matt Ricketts is President and CEO of Crounse Corporation, based in Paducah, KY, close to the Olmsted site.  Ricketts, also a member of the Inland Waterways Users Board, now deems Olmsted a success story – but links that compliment to the 2012 funding and policy reset that allowed the Corps to stay focused with the necessary funding to get the job done. “This gave the Corp a lot of certainty,” Ricketts commented, “it can’t be stated enough.  After the new cost sharing agreements in 2012, the Corps delivered on schedule and below budget. Everyone is well served by that.” Ricketts said that Olmsted removes logistical uncertainties.  “If Olmsted performs well,” he said, “that will de-risk that area of the river.”

Lessons Learned
What are the lessons learned from Olmsted? That’s perhaps the most common question that always arises from any Olmsted review and discussion. In fact, and as part of the Water Resources Reform and Development Act (WRRDA) of 2014, Congress required the Corps to develop a Lessons Learned report.  It’s an extensive document, divided into three broad sections that span the topics of Dam Design Considerations, Dam Contracting & Acquisition and, of course, Dam Construction.

Future projects, says the USACE, need to evaluate the risk of “less than optimum or uncertain funding” and impacts on innovative construction methods. Olmsted’s current leadership stressed again and again that US lawmakers must adopt predictable financing to pay for mega-projects like Olmsted.  Stop-and-start funding does not work. That’s because unrealistic estimates resulted in inaccurate costs and overly optimistic schedules which ultimately provided poorly reflected project risk.

Moreover, the USACE recommends working with the Corps’ Walla Walla Cost Engineering Center of Expertise to develop, sooner not later, dependable costs and timelines. Changes to final design need input from contractors. Plans developed by government architects and engineers had little input from contractors and changes led to delays and cost increases. To that end, projects expected to take more than five years need an annual review to monitor:

During the recent question and answer session at Olmsted, USACE and contractor personnel, justifiably, were proud to describe Olmsted’s completion. Martin Hettel, VP Government Affairs for American Commercial Barge Line, and Chairman of the Inland Waterways Users Board, was also part of the Q&A panel. That Board worked closely with the Corps to advance Olmsted, particularly regarding Congressional activity.

Hettel also complimented the final rounds of commitment and hard work. But he added a reminder: Olmsted is part of a larger waterways system, now in serious disrepair, partly because Olmsted gobbled up all waterways funding. The Corps and Congress shouldn’t cite Olmsted’s success but pull back on waterways commitments. Olmsted’s benefits, Hettel emphasized, will not be maximized until the larger system works at full potential.

The most important lesson learned? That comes down to lessons applied on future projects. And, as much scrutiny as Olmsted (justifiably) received, it is all but certain that the next project will be watched just as closely to ensure that ‘lessons learned translate into efficiencies earned.’ On an inland river system that promises countless uncertainties lurking around every bend, that’s one lesson stakeholders can take straight to the bank.

(This article first appeared in the JULY/AUGUST edition of Maritime Logistics Professional magazine.) 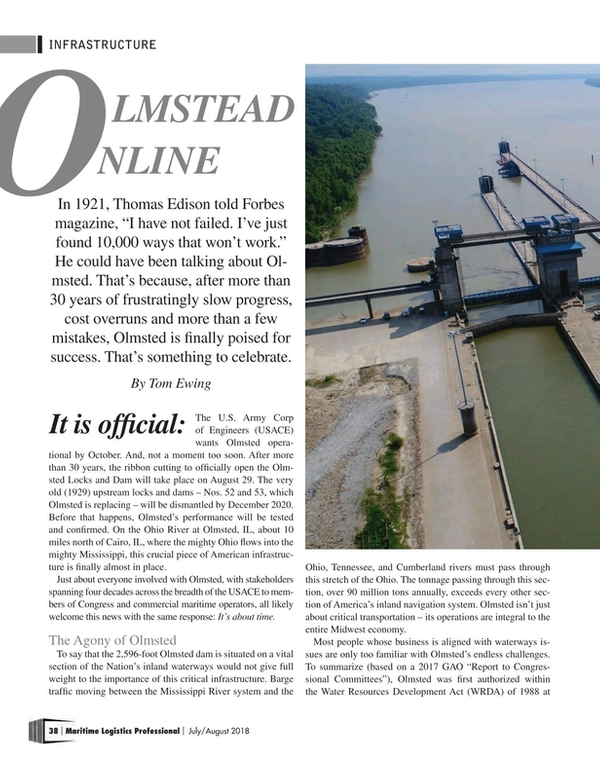