The 55th Annual Convention of The Propeller Club of the United States, and the concurrent 1981 American Merchant Marine Conference, will be held in Baltimore, Md., on October 14, 15, and 16.

Headquarters hotel for the event, which is being hosted by the Propeller Club Port of Baltimore, is the Baltimore Hilton Hotel.

The theme for this year's Convention and Conference is "The American Merchant Marine—An Imperiled Lifeline." Preconvention activities include a golf and tennis tournament at the Sparrows Point Country Club on October 12 and an early arrivals reception at the National Aquarium on October 13 at 6 p.m.

The "positions" that will be voted on during the convention include the following: The Propeller Club of the United States strongly supports the maritime objectives enunciated by President Reagan prior to his election, including his seven- point program. That program calls for the preservation of our shipbuilding mobilization base, increased military support functions for the merchant marine, the assurance of an equitable share of U.S. trade for our vessels, the restoration of cost-competitiveness to our fleet, a coherent national policy for the U.S.

water transportation system, review of regulatory requirements which inhibit American competitiveness, and recognition of the importance of the sea on our economic vitality, national defense, and foreign policy. The Propeller Club considers these objectives essential to the nation's future and calls upon the Government and industry to work cooperatively for achievement of those goals.

Position No. 2 calls for an effective approach for maritime legislative and regulatory reform.

The Propeller Club r e c o g n i z es that, both in tonnage and number of ships, our merchant marine is below that needed for our commercial requirements and national defense. Further, some of the problems of our merchant fleet are attributable in appreciable measure to our failure to update our maritime laws and regulatory controls. In addition, the omnibus approach attempted in the 96th Congress proved to be, perhaps, too ambitious and failed of success for that reason.

The Propeller Club believes that a segmental rather than an omnibus approach should be reverted to in the next Congress and recommends that the Congress address the matter of maritime legislative and regulatory reform on this basis in the coming sessions.

The Propeller Club fully supports the maritime fire-fighting program now being carried out by the Maritime Administration and the expansion of its fire-fighting schools to all four coasts of the United States. The Club recognizes that the growing needs of expanding world commerce require such action for the protection of seafarers, ships, and cargoes from the ravages of fire at sea.

Position No. 4 concerns gaining full advantage of our maritime cargo preference laws. The Propeller Club considers that cargo preference provisions now in our laws have been eroded through unnecessary exemptions and waivers or misplaced administrative concern, and urges the various branches of government to folow a positive approach to these laws and regulations to insure that American-flag ships carry an equitable portion of our trade.

The Club calls upon the government to take such measures as are consonant with the President's announced program.

Position No. 5 relates to uniformity in maritime regulatory enforcement. The Propeller Club recognizes that maritime regulatory enforcement is essential to the promotion of the commerce of the United States, however, it objects to a scheme of enforceability which penalizes the American merchant marine and fails to achieve equality of treatment for all carriers in our trades. The Club supports such appropriate legislative and regulatory remedial action as will provide the necessary uniform enforceability so essential for a strong U.S.-flag merchant fleet.

Position No. 6 concerns the Gallipolis Locks and Dam modernization project. The Propeller Club recommends and supports modernization of the Gallipolis Locks and Dam in accordance with the recommendations of the Huntington District Engineer in his November 1980 Report, the project to consist of (1) rehabilitation of the existing dam, and (2) replacement of the existing locks by construction of one 110- foot by 1,200-foot lock and one 110-foot by 600-foot lock in a 1.7 mile long navigable by-pass, landward of the existing lock.

Position No. 7 refers to the oil pollution fund: a Federal problem.

The Propeller Club recommends and supports the establishment of one national regime and one Federal oil pollution fund for the payment of cleanup costs and damage claims arising from spills of oil and other petroleum products. Further, the Club expressly supports the preemption of State liability laws and State oil pollution funds and a limitation on vessel liability to a reasonable and insurable level. Such measures will help to insure the success of a truly national oil pollution regime and fund.

Position No. 8 calls for port improvements for exports of coal and agricultural products. The Club considers that many vital U.S. seaports are inadequate for the efficient and competitive export of bulk coal and agricultural products, and urges that dredging projects fully funded by the Federal Government for maintenance and deepening of our seaport channels and harbors be expedited by all means possible for the benefit of our national interests and economy. In keeping therewith, the Propeller Club calls for support of such measures as will improve the capacities of our seaport navigation channels as quickly as possible, and is opposed to tying such programs to cost-recovery concepts.

P o s i t i o n No. 9 opposes increased waterway taxes and proposals for cost recovery. The Propeller Club opposes the proposals of the Administration for costrecovery by the U.S. Army Corps of Engineers of expenditures for operation, maintenance, and con- struction of facilities used by shallow-draft vessels on inland and intracoastal waterways of the United States. Current proposals would also greatly increase fuel taxes effective October 1, 1981, before consideration can be given to a study on the impact of waterway user taxes required by the 1978 legislation (Public Law 95-502) for report to the Congress by September 30, 1981.

The Club notes that, except for the 1978 inland waterway legislation, U.S. Army Corps of Engineers services have been rendered without user taxes or other charges for the benefit of all the public, serving boating, fishing, recreation, flood control, water supply, erosion containment, pollution prevention, and environmental control purposes. Imposing such costs exclusively on one specific user to the exclusion of other modes of transportation which also benefit therefrom is g r o s s l y unfair, this Position states.

The Propeller Club considers that cost-recovery proposals now being advanced by the Administration discriminate against the most effective commodity transport service offered to the American consumer. The applicability of such a process to U.S. Coast Guard c o s t - r e c o v e r y schemes would be equally discriminatory in nature. Any transfer of taxing authority to local port authorities for cost-recovery purposes for port "improvements" would raise important questions of constitutionality, according to this Position.

The 10th and final Position concerns sustaining the provisions of the Jones Act and our other cabotage laws. The Propeller Club fully supports Section 27 of the Merchant Marine Act, 1920, (popularly called the Jones Act) and all other existing cabotage provisions of U.S. law which mandate the exclusive construction and operation of U.S.-flag ships in our domestic commerce and opposes any attempt to abandon or weaken the full effect of such laws upon our domestic welfare and national security. The Club does not oppose the traditionally conservative granting of waivers from our cabotage laws but considers that such waivers, whether granted in the form of administrative actions, or as legislative exemptions, should be allowed only on a temporary basis and onlv upon a clear showing- that such action is necessary in the interest of national defense. 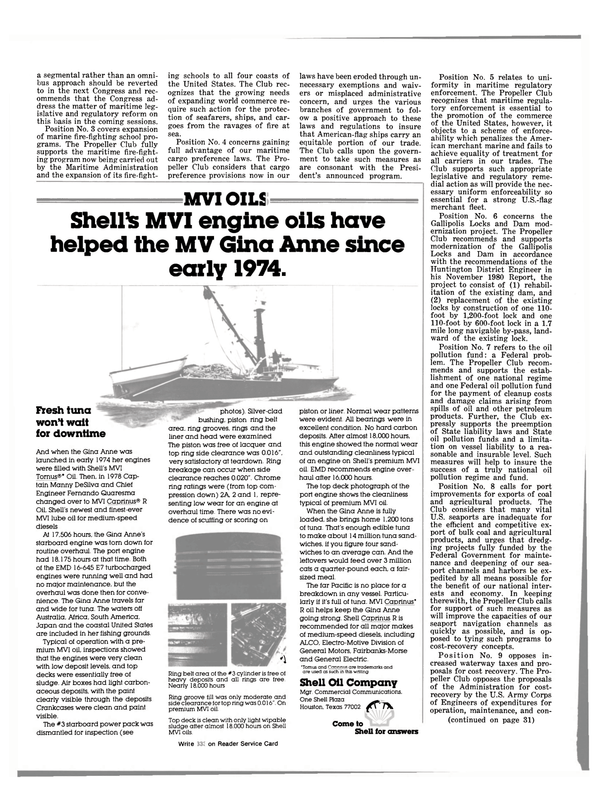