The Petromar Bravo (shown above), third in a series of six 192-foot tug/supply boats being built by Halter Marine, Inc., New Orleans, La., for the Petromar Corporation of Rockport, Texas, was christened recently in Corpus Christi.

The vessel was christened by Jan Cady, wife of George Cady of Texaco Inc., who has chartered the Petromar Bravo for work out of Warri, Nigeria. The new boat will join her Halterbuilt sister ships Petromar Atlas and Petromar Chief, which are already working for Texaco in Nigerian waters. They will be followed there soon by the Petromar Dorado, which is nearing completion at Halter's Chickasaw, Ala., division.

The Petromar Bravo is 192 feet 6 inches long with a 40-foot beam, and 15-foot draft. She is powered by two EMD 12-645E6a diesel engines developing 1,500 bhp each at 900 rpm through Lufkin 3:1 reverse/reduction gears. Maneuverability is enhanced by a Schottel bowthruster driven by a GM8V71 diesel engine.

She can carry 5,000 cubic feet of dry bulk mud in her four Smatco tanks and 1,500 barrels of liquid mud in four additional tanks. Her spacious 4,100-squarefoot aft deck can carry up to 700 tons of cargo.

In addition to the vessel's onboard fire-fighting system, she is also equipped to fight ship fires with a 500-gpm monitor located on top of the pilothouse. The monitor is served by an Aurora 421 pump and driven by power from a GM6-71 diesel engine.

The Petromar Bravo is loadline certificated and classed A-l, Maltese Cross, full ocean towing by the American Bureau of Shipping.

She is USCG classed subchapter I, USCG NVC 1-78, and Coast Guard admeasured under 300 gt.

The new Petromar vessel was built at Halter Marine's Chickasaw, Ala., division, one of a group of shipyards owned and operated by Halter Marine.

"The new offices, located near major shipping piers, are fully stocked with all major equipment and a good supply of spare parts.

And each is staffed with very capable people with broad technical, marketing, and service experience in electronic navigation and communications," Mr. Negron said.

The New Orleans office, at 651 Richard, Suite 2B, is managed by James Dougherty, who joined Electro-Nav after his retirement from the USAF. Frank Lensmyer III, previously with F&L Industrial Electronics and Specialized Lorain, will direct marketing activities.

The Houston office, at 706 Curtis in Pasadena, is managed by Frank J. Balsis, who spent 21 years in the USAF, retiring as ATC maintenance supervisor working with radars, SSB, VHF and UHF radio, and other navigation and communications equipment. 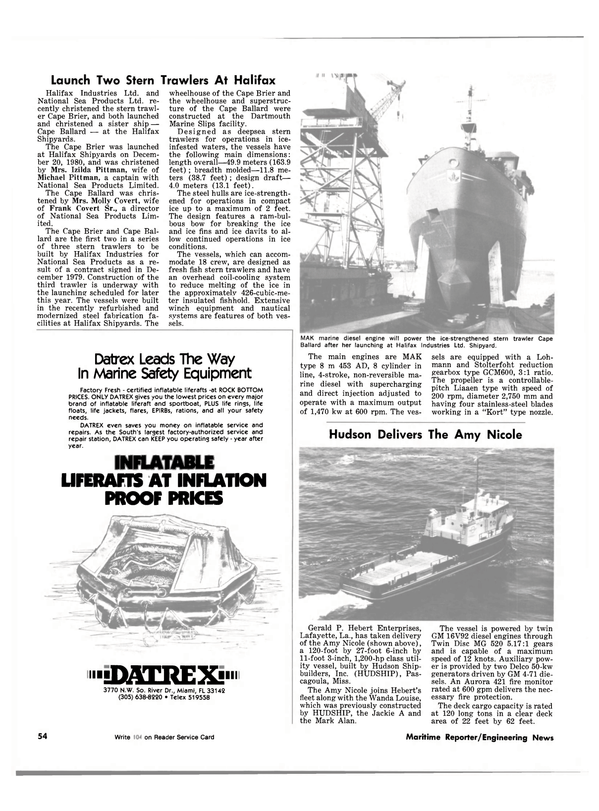