Williams, Bethlehem's president and chief operating officer, said that despite current depressed conditions in the industry, the new yard is in a good position to be profitable and to provide badly needed employment in the Port Arthur area.

The Sabine Yard is the only facility of its type in the Gulf area and its 64,000-ton-capacity drydock—one of the largest in the nation—is capable of servicing any type of mobile offshore drilling unit and production facility, as well as all types of ships.

Mr. Williams noted, too, that since the greenfield facility is located only eight nautical miles upstream from the anchorage at Sabine Pass and there are no bridges to restrict marine traffic, the new yard will provide easy access from and to the Gulf of Mexico.

The depth of the Sabine-Neches Ship Channel at Bethlehem's 100- acre Pleasure Island location is 40 feet. It is downriver from the Beaumont Yard which has been operated by Bethlehem since 1947.

Dignitaries from federal, state and local governments, as well as community and business leaders and union officials, took part in the dedication ceremonies for the Sabine Yard.

In addition to Bethlehem's president, other company officials participating in the dedication were David H. Klinges, vice president, marine construction group, Richard E. Blackinton, general manager of the new yard and Bethlehem's Beaumont Yard, and Frank W. Richardson I I I , manager of the Sabine Yard.

The new facility went into service on August 3, 1985, when a ship reconstructed by Bethlehem at Beaumont for the U.S. Navy's Maritime Prepositioning Ship Program utilized the yard's newly modified 64,000-ton-capacity drydock. While the ship was drydocked, its hull was cleaned and painted and a new propeller was installed. Three other ships have been serviced at the Sabine Yard since then.

The dedication climaxed a series of events which got underway more than a year before. In the interim Bethlehem had acquired use of the U.S. Navy surplus drydock—a selfsustained floating shipyard—constructed ancillary facilities for the drydock and dredged a portion of the ship channel to a depth of 60 feet to accommodate the drydock.

Also, Bethlehem built office and equipment repair facilities and relocated two miles of a state highway which ran through the Sabine Yard property.

The drydock had been berthed in Hawaii for more than 40 years when it was towed earlier this year to the Beaumont Yard for modification and reactivation work—a 14,000- mile journey.

After several months at Beaumont, the sections were towed to the Sabine Yard and assembled into the ship configuration mode in mid- July.

For oil rigs, the sections can be arranged in two side-by-side batteries.

Ownership of the drydock was transferred from the U.S. General Services Administration to the State of Texas to the Port of Port Arthur. The port allows Bethlehem to use it through an operating agreement approved by the federal agency and the port authority. 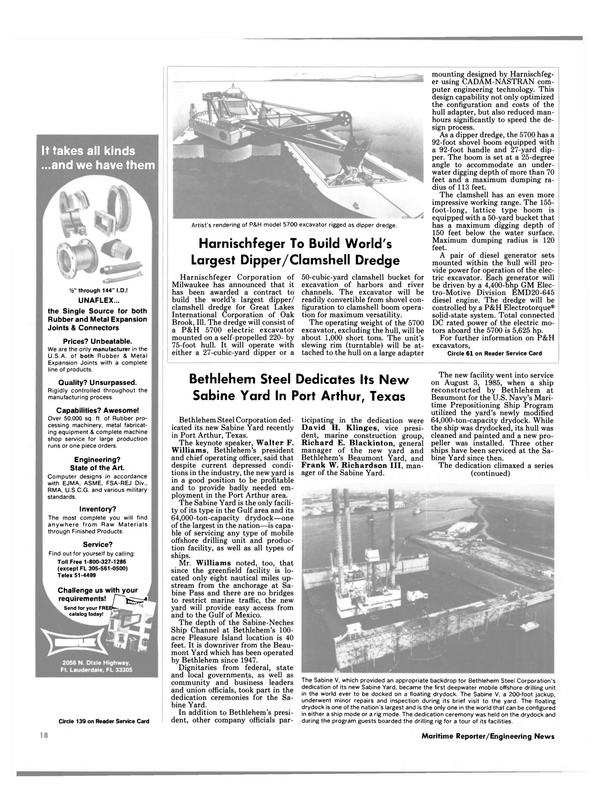