When the full 18 satellite constellation is operational, GPS will provide continuous, accurate navigation 24 hours a day. In the interim, large gaps in GPS coverage exist every day. The integration of Transit and dead reckoning with GPS assures the user that he will maintain accurate navigation 24 hours a day. Synergism between Transit and GPS navigation improves the accuracy of each Transit satellite fix. In fact, the position accuracy achieved in this way generally exceeds that available from independent GPS or Transit navigators.

The Magnavox integration approach means GPS can be utilized immediately instead of postponing use until the 1989 operational date.

Using an MX 1100-GPS, the operator can select between full screen displays of Transit and GPS navigation or the receiver can automatically select the optimum navaid, based on satellite orbit configuration.

Real-time set and drift information is also displayed using the vector difference between COGs and SOGs, and the ship's measured speed and heading through the water.

The system has a two-channel receiver, for continuous GPS usage.

While the first channel sequentially tracks each selected satellite, the second searches for and selects future optimum satellites.

The Magnavox approach emphasizes maximum availability. To optimize the GPS use with the presently limited constellation, the MX 1100-GPS can provide two-satellite navigation, delivering a more precise continuous running fix. This technique minimizes the accumulation of dead reckoning error between either three-satellite GPS or Transit fixes.

Magnavox has designed these receivers for optimum navigation performance today and for a smooth transition to the future. The MX 1100-GPS lets the owner continue working with the familiar Transit system while learning GPS. As more GPS satellites are launched, the receiver takes full advantage of the expanded constellation. Ultimately, and without operator intervention, the Magnavox system will navigate totally on GPS satellites using Transit as a backup system. (The Transit system will remain in operation until at least 1994.) The new SatNav series is available in either of four models, including single and dual-channel Transit Satellite and Omega capabilities. In addition, an upgrade package consisting of easily installed electronics boards and antenna is offered as a GPS field retrofit for existing Magnavox MX 1102, MX 1112, MX 1142, MX 1105, MX1107, and MX 1157 Transit SatNavs. 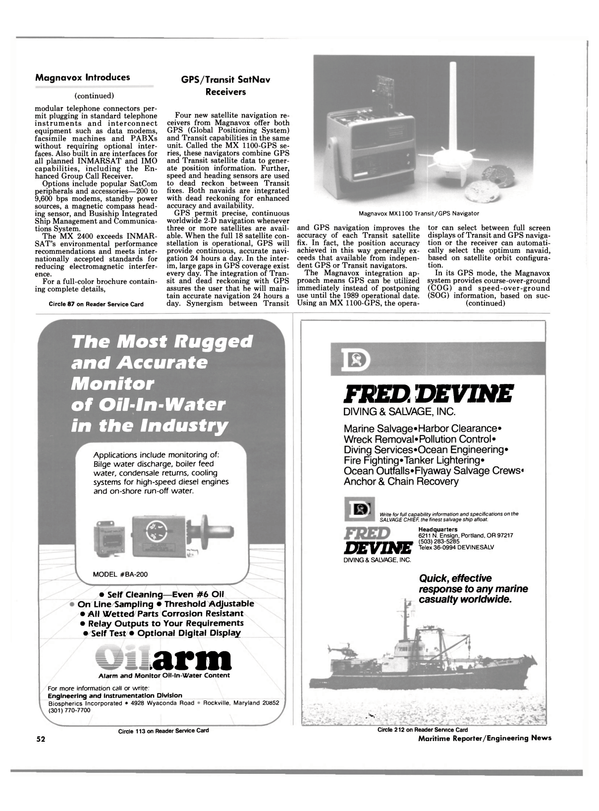